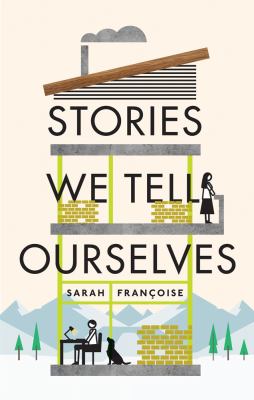 We’ve had some fantastic new additions to the fiction collection, certain to entertain and intrigue through these long winter evenings. These titles bring diverse voices from an ex-president to a documentary maker turned author. A reprint of Penelope Fitzgerald’s The Bookshop shows the insight this British writer has for social politics, recently adapted into film. New action and suspense have real life experiences from Bill Clinton and outdoor adventurer Bear Grylls, and retellings from WWII yield mystery and humour with Warlight by Michael Ondaatje and Dear Mrs. Bird by A. J. Pearce.

The President is missing / Clinton, Bill
“The President is Missing. The world is in shock. But the reason he’s missing is much worse than anyone can imagine. With details only a President could know, and the kind of suspense only James Patterson can deliver.”  (Catalogue)

Stories we tell ourselves / Françoise, Sarah
“Frank and Joan’s marriage is at breaking point. Having spent three decades failing to understand each other in their unfinished house in the French alps, Joan’s frustrations with her inattentive husband have reached breaking point. Frank, retreating ever further into his obscure hobbies, is distracted by an epistolary affair with his long-lost German girlfriend. Things are getting tense. But it’s Christmas, and the couple are preparing to welcome home their three far-flung children.” (Adapted from Catalogue)

Census / Ball, Jesse
“A widower with only a short time to live worries about the son he loves deeply, who has Down syndrome, and hopes he can give them more time together by signing up as a census taker for a mysterious governmental bureau. The road trip that results leaves him with as many questions as answers.” (Catalogue)

Night-gaunts : and other tales of suspense / Oates, Joyce Carol
A collection of eerie tales from this prolific American author feature “an unusual game of Russian roulette involving a pair of Wedgewood teacups, a strong Bengal brew, and a lethal concoction of medicine. A Sunday school teacher’s corpse. A young outsider, Horace Phineas Love, Jr., is haunted by apparitions at the very edge of the spectrum of visibility after the death of his tortured father in Night-Gaunts, a fantastic ode to H.P. Lovecraft.” (Adapted from Catalogue)

The bookshop / Fitzgerald, Penelope
“In a small East Anglian town, Florence Green decides, against polite but ruthless local opposition, to open a bookshop. Hardborough becomes a battleground. Florence has tried to change the way things have always been done, and as a result, she has to take on not only the people who have made themselves important, but natural and even supernatural forces too. Her fate will strike a chord with anyone who knows that life has treated them with less than justice.” (Adapted from Catalogue)

“Dear Mrs. Bird : a novel / Pearce, A. J.
“London, 1940. Emmeline Lake is Doing Her Bit for the war effort, volunteering as a telephone operator with the Auxiliary Fire Services. When Emmy sees an advertisement for a job at the London Evening Chronicle, her dreams of becoming a Lady War Correspondent suddenly seem achievable. But the job turns out to be working as a typist for the fierce and renowned advice columnist, Henrietta Bird. Emmy is disappointed, but gamely bucks up and buckles down.” (Catalogue)

In our mad and furious city / Gunaratne, Guy
“For Selvon, Ardan and Yusuf, growing up under the towers of Stones Estate, summer means what it does anywhere: football, music, freedom. But now, after the killing of a British soldier, riots are spreading across the city, and nowhere is safe. While the fury swirls around them, Selvon and Ardan remain focused on their own obsessions, girls and grime. Their friend Yusuf is caught up in a different tide, a wave of radicalism surging through his local mosque, threatening to carry his troubled brother, Irfan, with it.” (Catalogue)

They know not what they do / Valtonen, Jussi
“Joe Chayefski has got what he always wanted: a reputation as one of America’s top neuroscientists, a beautiful wife and two perfect daughters. But his carefully created idyll is threatened when his lab is targeted by animal rights activists. The attack is followed by a phone call from Joe’s ex-wife in Finland. Two decades have passed since he abandoned Alina and their young son, Samuel, returning to America to advance his career. Joe struggles to protect his new family from the increasing threat of violence – he is forced to reconsider his priorities and take drastic action to save those he loves.” (Catalogue)

“The world goes on / Krasznahorkai, László
“A Hungarian interpreter obsessed with waterfalls, at the edge of the abyss in his own mind, wanders the chaotic streets of Shanghai. A traveller, reeling from the sights and sounds of Varanasi, encounters a giant of a man on the banks of the Ganges ranting on the nature of a single drop of water. A child labourer in a Portuguese marble quarry wanders off from work one day into a surreal realm utterly alien from his daily toils.  In The World Goes On, a narrator first speaks directly, then tells twenty-one unforgettable stories, and then bids farewell.”(Adapted from Catalogue)

Obscura / Hart, Joe
“In the near future, an aggressive and terrifying new form of dementia is affecting victims of all ages. The cause is unknown, and the symptoms are disturbing. Dr. Gillian Ryan is on the cutting edge of research and desperately determined to find a cure. She’s already lost her husband to the disease, and now her young daughter is slowly succumbing as well. She will travel with a NASA team to a space station where the crew has been stricken with symptoms of a similar inexplicable psychosis–memory loss, trances, and violent, uncontrollable impulses.” (Adapted from Catalogue)

The hunt / Grylls, Bear
“1945, and the Nazis’ grand plans are in disarray. Defeat is imminent, so in a last attempt to protect their legacy, the high command hides their store of uranium deep underground, ready for them to fight another day. 2018, and ex-SAS soldier Will Jaeger stumbles upon this horrible truth. But the uranium is missing and, when he learns his wife Ruth has also been kidnapped, he’s certain the enemy is on the move once more…  But the enemy is always one step ahead, pushing Jaeger to the limit of his endurance. The danger is real, and the people who hold Ruth have a score to settle. It’s a race against time. And the clock is ticking.” (Catalogue)

Reviews from library patrons are a great way to find out what people have loved reading from the new additions to the fiction collection. These selections are highlighted with Reader’s Choice stickers so that others can find great reading material.  You can find slips for Reader’s Choice reviews in new books, or ask staff for one if you have a review or recommendation to embellish the library collection.

“This captivating retelling of a classic fairy tale imaginatively explores parental obsession, spousal love, and the secrets that make strangers out of the people we love the most. It’s a thrilling and emotionally devastating journey through the gruesome legacies that threaten to devour us and the homely, messy magic that saves us, if we’re lucky.” (Catalogue)

Stranded / MacLeod, Bracken
“Badly battered by an apocalyptic storm, the crew of the Arctic Promise find themselves in increasingly dire circumstances as they sail blindly into unfamiliar waters and an ominously thickening fog.” (Catalogue)

Reader’s review: “I thought this book was suspenseful, gripping and well researched. Doesn’t lean on the numerous clichés of the horror genre which makes it so engaging.  A great read!” (4/5 stars)
⭐⭐⭐⭐

Hanna who fell from the sky / Meades, Christopher
“With lush, evocative prose, award-winning author Christopher Meades takes readers on an emotional journey into a fascinating, unknown world–and, along the way, brilliantly illuminates complexities of faith, identity and how our origins shape who we are.” (Catalogue)

Reader’s review: “What a well written novel, thoroughly enjoyed it, well worth reading. Never read any of Meades novels before would love to read more of his material.” (5/5 stars)
⭐⭐⭐⭐⭐

The last hours / Walters, Minette
“When the Black Death enters England through the port of Melcombe in Dorseteshire in June 1348, no one knows what manner of sickness it is or how it spreads and kills so quickly.” (Catalogue)

Eureka / Quinn, Anthony
“Summer, 1967. As London shimmers in a heat haze and swoons to the sound of Sergeant Pepper, a mystery film – Eureka – is being shot by German wunderkind Reiner Kloss. The screenwriter, Nat Fane, would do anything for a hit but can’t see straight for all the acid he’s dropping.” (Catalogue)

Reader’s review: “Was an enjoyable read, especially in it’s evocation of London in the ‘swinging sixties’.” (4/5 stars)
⭐⭐⭐⭐

Kruso / Seiler, Lutz
“It is 1989, and a young literature student named Ed, fleeing unspeakable tragedy, travels to the Baltic island of Hiddensee. Long shrouded in myth, the island is a notorious destination for hippies, idealists, and those at odds with the East German state.” (Catalogue)

Reader’s review: “I thought this book was compelling.  Via fantasy and fact Seiler deftly weaves a story about East German idealists, refugees and escapists told through the perspective of a challenged young man” (5/5 stars)
⭐⭐⭐⭐⭐

Eye of the songbird / Munro, Michael
“What happens when a New Zealand team of scientists find one of the world’s largest flawless diamonds on the last piece of sovereign-less land, Antarctica?” (Catalogue)

Reader’s review: “A highly relevant New Zealand thriller with it’s plot centred on one of the big issues of the day; climate change.  Highly recommended” (4/5 stars)
⭐⭐⭐⭐⭐

The miranda : a novel / Nicholson, G. J.
“The Miranda is at turns a biting satire about the secrets we keep from our neighbors, and about the invisible and unceasing state of war in which most Westerners unconsciously live.” (Catalogue)

Reader’s review: “I thought this book was like a Coen Brothers movie: darkly satirical. The detachment of the protagonist is key to this novel – he was a psychologist turned government agent training operatives to withstand torture. He is not disaffected, quite the reverse, but he is clinical , perceptive and interesting. A good dark read.” (4/5 stars)
⭐⭐⭐⭐⭐