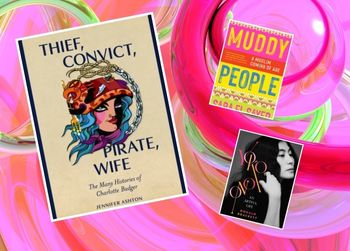 From a rugby player fighting dementia to a wild woman of history, the working class kids to one of the most iconic women of our times, we have some fantastic new biographies and memoirs in our collection this month.

Unforgettable : rugby, dementia and the fight of my life / Thompson, Steve“Unforgettable is at once a powerful, affecting sports memoir from a true giant of rugby, and a raw call to arms to safeguard the sports we love and all those who play them.” (Catalogue)

Thief, convict, pirate, wife : the many histories of Charlotte Badger / Ashton, Jennifer“Charlotte Badger is a woman around whom many stories have been woven: the thief sentenced to death in England and then transported to New South Wales; the pirate who joined a mutiny to take a ship to the Bay of Islands; the first white woman resident in Aotearoa; the wife of a rangatira, and many more. The author shows how history and historical figures like Charlotte Badger are made and remade over time by journalists and historians, painters and playwrights. Thief, Convict, Pirate, Wife is the fascinating story of a remarkable, curious, ordinary woman and her place in history.” (Adapted from Catalogue)

The all of it : a bogan rhapsody / Bell, Cadance“Seven years ago, Ben was loveless, overweight, in debt and living in his parents’ rumpus room, trying to find a way to quietly die. Days passed by in a haze of marijuana smoke and self-loathing. Then, one day, Ben decided not to die. He decided to change everything – starting with the Ben bit. Becoming Cadance would be more than a gender transition. It would be a transition in every way. It would mean leaving behind a rural Mudgee childhood filled with Frogger, hot chips, Godliness and a forbidden love of Sarah Parker’s My Little Pony; and the violence, drugs and secrecy that plagued her twenties. Choosing to live was just the beginning; what mattered was how she existed. She was going to experience the all of it.” (Adapted from Catalogue)

Corrections in ink : a memoir / Blakinger, Keri“An elite, competitive figure skater growing up, Keri Blakinger poured herself into the sport, even competing at nationals. But when her skating partnership ended abruptly, her world shattered. With all the intensity she saved for the ice, she dove into self-destruction. From her first taste of heroin, the next nine years would be a blur-living on the streets, digging for a vein, selling drugs and sex, eventually plunging off a bridge when it all became too much, all while trying to hold herself together enough to finish her degree at Cornell. Then, on a cold day during Keri’s senior year, the police stopped her. Caught with a Tupperware container full of heroin, she was arrested and ushered into a holding cell, a county jail, and finally into state prison. There, in the cruel “upside down,” Keri witnessed callous conditions and encountered women from all walks of life-women who would change Keri forever.” (Adapted from Catalogue)

Muddy people : a Muslim coming of age / El Sayed, Sara“A quick, clever, warm-hearted debut about growing up in an Egyptian-Muslim family. Sara is growing up in a family with a lot of rules. Her mother tells her she’s not allowed to wear a bikini, her father tells her she’s not allowed to drink alcohol, and her grandmother tells her to never trust a man with her money. After leaving Egypt when Sara was only six years old, her family slowly learns how to navigate the social dynamics of their new home. Sara feels out of place in her new school. Her father refuses to buy his coworkers a ginger beer, thinking it contains alcohol. Her mother refuses to wear a hijab, even if it would help them connect with other local Muslims. And Sara learns what it feels like to have a crush on a boy, that some classmates are better friends than others, and that her parents are loving, but flawed people who don’t always know what’s best for her, despite being her strongest defenders.” (Adapted from Catalogue)

Coconut / Olajide, Florence“1963, North London. Nan fosters one-year-old Florence Ọlájídé and calls her ‘Ann.’ Florence adores her foster mother more than anything but Nan, and the children around her, all have White skin and she can’t help but feel different. Then, four years later, after a weekend visit to her birth parents, Florence never returns to Nan. Two months after, sandwiched between her mother and father plus her three siblings, six-year-old Florence steps off a ship in Lagos to the fierce heat of the African sun. Swapping the lovely, comfortable bed in her room at Nan’s for a mat on the floor of the living room in her new home, Florence finds herself struggling to adjust. She wants to embrace her cultural heritage but doesn’t speak Yoruba and knows nothing of the customs. Clashes with her grandmother, Mama, the matriarch of the family, result in frequent beatings. Torn between her early childhood experiences and the expectations of her African culture, she begins to question who she is. Nigerian, British, both?” (Adapted from Catalogue)

Annie’s boy / Todd, Gary“Annie’s Boy is a coming-of-age story as seen through the eyes of a boy and his mum living in Scotland in the 1970s and 80s where fear, violence and struggle was an everyday part of life. It is a story of hope and quiet courage and perseverance that will take you on an emotional roller coaster that spans over fifteen years of their lives and what they did to survive. Gary and his mother lived in fear at the intimidation and violence that came from his father. At the age of ten, he agreed to testify against his father in court to try and stop the ordeal from continuing. The book is also a look at the tough and gritty life of Dundee during the period.” (Adapted from Catalogue)

The gift of a radio : my childhood and other trainwrecks / Webb, Justin“Justin Webb’s memoir of his 1970s upbringing is as much a portrait of a strange decade in our history as of his own dysfunctional childhood. Justin Webb’s childhood was far from ordinary. Between his mother’s un-diagnosed psychological problems, and his step-father’s untreated ones, life at home was dysfunctional at best. But with gun-wielding school masters and sub-standard living conditions, Quaker boarding school wasn’t much better. And the backdrop to this coming of age story? Britain in the 1970s. Led Zeppelin, Janis Joplin and Free. Strikes, inflation and IRA bombings. A time in which attitudes towards mental illness, parenting and masculinity were worlds apart from the attitudes we have today. A society that believed itself to be close to the edge of breakdown.” (Adapted from Catalogue)

Yoko Ono : an artful life / Brackett, Donald“For more than sixty years, Yoko Ono has fascinated us as one of the world’s most innovative, radical artists. From a childhood of both extraordinary privilege and extreme deprivation in war-time Japan, she adopted an outsider’s persona and moved to America where, after a spell at Sarah Lawrence College, she made a place for herself in bohemian arts circles. She was already twice divorced and established as a performance artist in the Fluxus movement and in Tokyo’s avant-garde scene before her fortuitous meeting with the Beatles’ John Lennon at a London Gallery in 1966. Their intense yet fraught relationship, reputed to have blown-up the Beatles, made headlines around the world, as did their famous bed-ins in protest of the Vietnam war, and their majestic, Grammy-winning musical collaborations. Through it all, and for decades after Lennon’s tragic death, she remained defiantly herself. Yoko Ono: An Artful Life charts her journey of personal turmoil, artistic evolution, and activism, and at last tells her iconic story on her own terms.” (Catalogue)

To see what else is new in our collection, go to what’s new & popular (wcl.govt.nz)