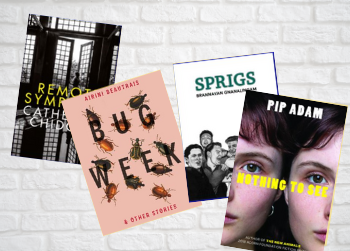 The Ockham 2021 fiction shortlist has just been announced and what a wildly diverse, eclectic and fabulous list it is. There are two previous winners in there – Pip Adam and Catherine Chidgey – and it is safe to say that, as befits New Zealand’s top fiction award, some very challenging issues are explored in several of the books, including the Holocaust, the aftermath of a sexual assault at a high school rugby game, surveillance, gender and the longtail effects of capitalism.

The quality and calibre of all four finalists in the Jann Medlicott Acorn Prize for Fiction is quite exceptional and all four books are highly readable and available to borrow from Wellington City Libraries.

You can also see shortlisted author Brannavan Gnanalingam at our forthcoming A Capital Crimespree event at Newtown Library on the 30th of April.  For full details of that event click here.

Bug week & other stories / Beautrais, Airini
“A science educator in domestic chaos fetishises Scandinavian furniture and champagne flutes. A group of white-collar deadbeats attend a swinger’s party in the era of drunk Muldoon. A pervasive smell seeps through the walls of a German housing block. A seabird performs at an open-mic night. Bug Week is a scalpel-clean examination of male entitlement, a dissection of death, an agar plate of mundanity. From 1960s Wellington to post-Communist Germany, Bug Week traverses the weird, the wry and the grotesque in a story collection of human taxonomy.” (Adapted from Catalogue)

Nothing to see / Adam, Pip
“It’s 1994. Peggy and Greta are learning how to live sober. They go to meetings and they ring their support person, Diane.  They live with Heidi and Dell, who are also like them. It’s 2006. Peggy and Greta have two jobs: a job at a call centre, and a job as a moderator for a website. They’re teaching themselves how to code. Heidi and Dell don’t live together anymore. It’s 2018. Margaret lives next door to Heidi and her family. She has a job writing code that analyses data for a political organisation, and she’s good at it. Every day she checks an obsolete cellphone she found under her bed, waiting for messages. ” (Adapted from Catalogue) Also available as an eBook.

Remote sympathy / Chidgey, Catherine
“Moving away from their lovely apartment in Munich isn’t nearly as wrenching an experience for Frau Greta Hahn as she had feared.  Frau Hahn and the other officers’ wives living in this small community can order anything they desire, whether new curtains made from the finest French fabrics, or furniture designed to the most exacting specifications. Life here in Buchenwald would appear to be idyllic. When Frau Hahn is forced into an unlikely and poignant alliance with one of Buchenwald’s prisoners, Dr Lenard Weber, her naïve ignorance about what is going on so nearby is challenged.” (Adapted from Catalogue) Sprigs / Gnanalingam, Brannavan
“It is Saturday afternoon and two boys’ schools are locked in battle for college rugby supremacy. Priya – a fifteen year old who barely belongs – watches from the sidelines. Then it is Saturday night and the team is partying. Priya’s friends have evaporated and she isn’t sure what to do. In the weeks after ‘the incident’ life seems to go on. But when whispers turn to confrontation, the institutions of wealth and privilege circle the wagons.”–cover. (Adapted from Catalogue)

For a  full list of all other categories shortlisted, see below: