We love movies based on books, and we love the New Zealand International Film Festival! Maybe you’ve read the book and want to see the adaptation, or maybe you just think “I’ve heard of that!” Whatever the reason, check out the great films based on these literary works during this year’s festival.

Berlin syndrome / Melanie Joosten.
“One afternoon, near the tourist trap of Checkpoint Charlie, Clare meets Andi. There is an instant attraction, and when Andi invites her to stay, Clare thinks she may finally have found somewhere to call home. But as the days pass and the walls of Andi’s apartment close in, Clare begins to wonder if it’s really love that Andi is searching for a or something else altogether. Berlin Syndrome is a closely observed and gripping psychological thriller that shifts between Andi’s and Clare’s perspectives, revealing the power of obsession, the fluidity of truth, and the kaleidoscopic nature of human relationships.” (Syndetics summary)

Blade of the immortal [1] : blood of a thousand / art and story, Hiroaki Samura.
“To end his eternal suffering, he must slay one thousand enemies! Manji, a ronin warrior of feudal Japan, has been cursed with immortality. To rid himself of this curse and end his life of misery, he must slay one thousand evil men! His quest begins when a young girl seeks his help in taking revenge on her parents’ killers… and his quest won’t end until the blood of a thousand has spilled!” (Syndetics summary)

Call me by your name / André Aciman.
“Call Me by Your Name is the story of a sudden and powerful romance that blossoms between an adolescent boy and a summer guest at his parents’ cliff-side mansion on the Italian Riviera. Unprepared for the consequences of their attraction, at first each feigns indifference. But during the restless summer weeks that follow, unrelenting buried currents of obsession and fear, fascination and desire, intensify their passion as they test the charged ground between them. What grows from the depths of their spirits is a romance of scarcely six weeks’ duration and an experience that marks them for a lifetime.” (Adapted from Syndetics summary)

Ethel & Ernest directed by Roger Mainwood. Based on the graphic novel by Raymond Briggs.

Ethel & Ernest / Raymond Briggs.
“Ethel & Ernest is the story of Raymond Briggs’s parents lives from their first chance encounter to their deaths. Their story provides a social history of the lives of two ordinary people living in England during the 20th century. Through Ethel and Ernest the reader learns how the average person coped with the many changes in the 20th century including, the dark days of the Second World War, the birth of the Welfare State and the advent of television. Told in Brigg’s unique strip-cartoon format.” (Syndetics summary)

Heal the Living directed by Katell Quillévéré. Based on the novel The Heart. 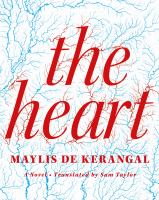 The heart : a novel / Maylis de Kerangal ; translated by Sam Taylor.
“Just before dawn on a Sunday morning, three teenage boys go surfing. Returning home, exhausted, the driver lets the car drift off the road into a tree. Two of the boys are wearing seat belts; one is sent through the windshield. He is declared brain-dead shortly after arriving at the hospital. His heart is still beating. The Heart takes place over the twenty-four hours surrounding a fatal accident and a resulting heart transplant as life is taken from a young man and given to a woman close to death. In gorgeous, ruminative prose it examines the deepest feelings of everyone involved–grieving parents, hardworking doctors and nurses–as they navigate decisions of life and death.” (Syndetics summary)

In Times of Fading Light directed by Matti Geschonneck. Based on the novel by Eugen Ruge.

In times of fading light : the story of a family / Eugen Ruge ; translated from the German by Anthea Bell.
“In Times of Fading Light begins in September 2001 as Alexander Umnitzer, who has just been diagnosed with terminal cancer, leaves behind his ailing father to fly to Mexico, where his grandparents lived as exiles in the 1940s. The novel then takes us both forward and back in time, creating a panoramic view of the family’s history: from Alexander’s grandparents’ return to the GDR to build the socialist state, to his father’s decade spent in a gulag for criticizing the Soviet regime, to his son’s desire to leave the political struggles of the twentieth century in the past. With wisdom, humor, and great empathy, Eugen Ruge draws on his own family history as he masterfully brings to life the tragic intertwining of politics, love, and family under the East German regime.” (Syndetics summary)

Jasper Jones directed by Rachel Perkins. Based on the novel by Craig Silvey.

Jasper Jones : a novel / Craig Silvey.
“Late on a hot summer night in the tail end of 1965, Charlie Bucktin, a precocious and bookish boy of thirteen, is startled by an urgent knock on the window of his sleep-out. His visitor is Jasper Jones, an outcast in the regional mining town of Corrigan. Rebellious, mixed-race and solitary, Jasper is a distant figure of danger and intrigue for Charlie. So when Jasper begs for his help, Charlie eagerly steals into the night by his side, terribly afraid but desperate to impress. Jasper takes him through town and to his secret glade in the bush, and it’s here that Charlie bears witness to Jasper’s horrible discovery. In the simmering summer where everything changes, Charlie learns why the truth of things is so hard to know, and even harder to hold in his heart.” (Adapted from Syndetics summary)

The Lost City of Z directed by James Gray. Based on the book by David Grann.

The lost city of Z : a legendary British explorer’s deadly quest to uncover the secrets of the Amazon / David Grann.
“Colonel Percy Harrison Fawcett was the last of a breed of great British explorers who ventured into ‘blank spots’ on the map with little more than a machete, a compass and a sense of purpose. In 1925, the last great blank spot in the world was in the Amazon. Fawcett believed the jungle held a secret to a large, complex civilization, which he christened the City of Z, but is also known as El Dorado. When he and his son embarked upon their journey into the Amazon they warned that none should follow them in the event that they did not return. They vanished without a trace. In The Lost City of Z, David Grann ventures into the hazardous wild world of the Amazon to retrace the footsteps of the great Colonel Fawcett and those who followed in a bracing attempt to solve a mystery centuries in the making.” (Adapted from Syndetics summary)

A Monster Calls directed by J. A. Bayona. Based on the novel by Patrick Ness. 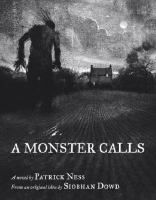 A monster calls : a novel / by Patrick Ness ; from an original idea by Siobhan Dowd ; illustrations by Jim Kay.
“The monster showed up just after midnight. But it isn’t the monster Conor’s been expecting. He’s been expecting the one from his nightmare, the one he’s had nearly every night since his mother started her treatments. The monster in his back garden, though, this monster is something different. Something ancient, something wild. Winner of the National Book Tokens Children’s Book of the Year Award 2011.” (Syndetics summary)

My Friend Dahmer directed by Marc Meyers. Based on the graphic novel by Derf.

My friend Dahmer : a graphic novel / [text and illustrations] by Derf Backderf ; [editor, Charles Kochman].
“In 1991, Jeffrey Dahmer–the most notorious serial killer since Jack the Ripper–seared himself into the American consciousness. To the public, Dahmer was a monster who committed unthinkable atrocities. To Derf Backderf, “Jeff” was a much more complex figure: a high school friend with whom he had shared classrooms, hallways, and car rides. In My Friend Dahmer, a haunting and original graphic novel, writer-artist Backderf creates a surprisingly sympathetic portrait of a disturbed young man struggling against the morbid urges emanating from the deep recesses of his psyche–a shy kid, a teenage alcoholic, and a goofball who never quite fit in with his classmates. With profound insight, what emerges is a Jeffrey Dahmer that few ever really knew, and one readers will never forget.” (Adapted from Syndetics summary)

Swallows and Amazons directed by Philippa Lowthorpe. Based on the novel by Arthur Ransome.

Swallows and Amazons / Arthur Ransome ; illustrated by the author with help from Miss Nancy Blackett.
“The Walker children — also known as Captain John, Mate Susan, Able-Seaman Titty, and Ship’s Boy Roger — set sail on the Swallow and head for Wild Cat Island. There they camp under open skies, swim in clear water and go fishing for their dinner. But their days are disturbed by the Blackett sisters, the fierce Amazon pirates. The Swallows and Amazons decide to battle it out, and so begins a summer of unforgettable discoveries and incredible adventures.” (Syndetics summary)