Unfortunately Rachel’s lunchtime performance today at the Museum of Wellington City and Sea has had to be cancelled. We hope Rachel will be able to reschedule at a later date and will keep you posted as and when we hear more. 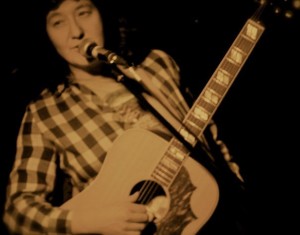 New Zealand singer and songwriter Rachel Dawick is back in Wellington on the second stage of her ‘Follow My Tears’ tour, and will give a free performance celebrating the lives of women in 1800s New Zealand this Friday at the Museum of Wellington City and Sea.

Rachel visited Wellington City Libraries back in May and gave us two beautiful performances, capturing women’s stories with “a slice of folk, a dash of blues and a bit of country with a twist”.  This time Rachel is collecting stories of women’s lives from 1893 to WWII as she cycles(!) through New Zealand and raises funds for Christchurch Women’s Refuge along the way.

Come to the Museum of Wellington City and Sea, 12.30pm Friday 11 November, to hear Rachel and maybe bring along a story or two of your own.  Entry is free.

For 60 days Rachel will be touring New Zealand performing and collecting stories of New Zealand women in the 1800s on her journey.

“Researching into the songs written in the 1800s in NZ revealed a large gap in terms of those by women. It was a musical history dominated by men and therefore providing only half a story. If there weren’t the songs then the next best thing would be to discover the stories and write the songs myself.”
Rachel Dawick.

Want to have a listen before the event? Check out Rachel’s previous albums in our catalogue.

For more information about the “Follow My Tears” tour: http://web.me.com/rdawick/www.followmytears.com/The_Plan.html

Wellington City Libraries has a monthly radio show on Radio Access. For a recent show (27th November, 4.00 – 4.30) we interviewed Tama Waipara, singer/songwriter behind the 2009 release ‘Sir Plus and the Requirements,’ – a beautifully realised concept album rich in pop hooks and delicous arrangements.

Tama talks generously about his inspirations, lyrics and songs and the 35 minute interview includes 6 songs from his 3 albums so far.
Below are the albums featured in the show:

Wellington City Libraries has a monthly radio show on Radio Access. For an upcoming show (7 August, 4.00 – 4.30) we recently interviewed Edmund McWilliams (Ed Cake) writer of brilliantly skewed pop gems over the last 15 or so years.  (Grab a preview of this show below)

His most recent release, The Fearsome Feeling was the last CD to be featured in Nick Bollinger’s ‘100 essential New Zealand albums.’

‘The album features songs about love, not love songs as such, but songs that blend ideas about love with fear, insanity, talkback radio, violence against children, death of a loved one, indecision, abandonment, fame, Michael King/motorcars.’

Listen to the entire interview – covered are 2 songs from each of Ed’s 3 albums so far and Ed’s views on his songs, music and the potential of percussive tap dancers!

Below are the albums featured in the show:

The Fearsome Feeling by Pie Warmer