The Central Library is offering to library members its hard-copy vintage collection of The Times, dating from 1946 through to the start of 1976.  Each issue is for sale at $5 per copy but there is only one copy of each date. Please note that this collection excludes the Sunday Times which was, and remains, a separate newspaper editorially.

This is an ideal quirky gift for anyone born between 1946 and 1976; please pre-order your copy by visiting or phoning the 2nd floor reference desk at the Central Library on 04 801 4114.

Major historical and cultural events covered during this period include:

You can still access and read this entire date-range of The Times for free via the Times Digital Archive on My Gateway.

Just in time for Christmas, come in, grab a copy and delve into the past. Read what’s happening right this moment around the world through the newly introduced free digital access to the New York Times provided by Wellington City Libraries. From business, politics and technology to arts, style and food – with this range, you are sure to find articles, interviews and special reports you’ll enjoy.  You can also share your own thoughts by making comments in the ‘Readers Comments’ section.

As a Wellington City Libraries member you can login with your card details and claim a  ‘group pass’, which offers 24 hours access to the ‘New York Times’ and the ‘International New York Times’ websites via your browser or the dedicated NYT smartphone app.  (NB When you first login, you will need to create a New York Times’ account). Included in the pass is access to the searchable archive from 1851-1922 and 1981-present.

You’ll find information about this new access on our mygateway.info Newspapers page, or call in to see us at your favourite Wellington City Libraries’ branch if you have any queries. We will be happy to take you through how to login to the New York Times and answer your questions. Happy reading!

What do you get when you cross Gutenberg’s printing press with the communal, oral storytelling of Māori tradition? When New Zealand’s first printing press arrived at Waitangi in the 1830s, the answer soon became clear: you got a print revolution.

The first book produced in New Zealand followed soon after this, an edition of Biblical epistles produced by CMS missionaries in the Bay of Islands. Many publications of various kinds followed, and by 1842 the first newspaper (niupepa) in Māori, Ko Te Karere o Nui Tireni, produced by the government, was already in production. Estimates of Māori literacy in the middle of the 1800s varied, but it is fairly certain that in many areas, rates of those able to read and write in their own language were at least as good as of the English population. The Niupepa found a ready-made readership and, and plenty of demand for news of events and other articles.

Te Karere was quickly followed by around 34 more Māori newspaper publications in Te Reo, many publishing at the same time in the 1850s. Around 70% of content was published in Te Reo Māori only, 27% bilingually, and 3% in English only. Some papers were published by government, particularly through what was then the Department of Native Affairs, some by churches, particularly Anglicans and Wesleyans, and some by Māori movements including the Kingitanga and Kotahitanga. The different sponsors of the newspapers greatly influenced the content they published, which could range from collections of pēpeha, Māori proverbs, to government exhortations for allegiance to the crown. Inevitably, worsening frictions between iwi and settler government were reflected in the newspapers, and some operated in direct opposition.

The most notable government paper Te Pihoihoi Mokemoke and its Kingitanga counterpart, Te Hokioi, both of which sought to win the minds of people nationwide to their position at the height of the Waikato War. The competition escalated to the point where a group of Kingitanga warriors went to the press of Te Pihoihoi in Te Awamutu, took the entire printing press, and removed it from its printing works, effectively putting a stop to the war of words.

Many niupepa were highly nuanced, and drew on traditional metaphor to communicate their purposes. The imagery of a newspaper as a bird, bringing information to readers just as migratory birds brought their first birdsongs to signify summer and renewal, was very popular. Many niupepa expanded the metaphor, drawing parallels between subscriptions and “food for the bird”, sad news of accidents and deaths as mournful birdsong, and wrote of “our bird” frequently. A bird can be seen in several intricate masthead images, as in the image from Te Pipiwharauroa – a shining cuckoo soaring down over a peaceful home and a family sitting reading.

As well as news from both Aotearoa and internationally, the niupepa often published stories, anecdotes of daily life, and translated English or foreign texts including poetry by Robert Brown and William Cowper, and excerpts from Shakespearean plays. Te Pipiwharauroa also published translations of, for example, Hawaiian songs, with Māori translation by the editors.

A song translated from Hawaiian to Māori, featured in a copy of Te Pipiwharauroa in 1924.
From nzdl.org

Māori newspapers peaked in number in the 1850s, and declined to just three by the beginning of 1900. None of the niupepa from this period are still in production, having been replaced from the 1970s with other forms of media. However, many have been preserved in libraries and archives, and are available to study today as a fascinating insight into Māori history and society during this time.

Wellington City Libraries holds microfiche reproductions of many niupepa, available for viewing on the second floor of Central Library. We also hold several books about Māori newspapers, printing, and literacy.

Colonial discourses : niupepa Māori, 1855-1863 / Lachy Paterson.
“Paterson examines nine Maori-language newspapers in New Zealand over an eight-year span, starting with the revitalization of the government newspaper, Te Karere Maori, and ending with its demise. Examining the material, social, cultural, and political content, Paterson finds that the Maori-language newspapers were used for propaganda purposes and that those run by European settlers, while possessing different agenda, effectively spoke with one voice regarding religious, social and political issues. He also argues that the newspapers informed and influenced Maori readers but at the same time provided a platform for the Maori to voice their opinions and debate issues of the time with the European settlers…” (adapted from the Syndetics summary)

Rere atu, taku manu : discovering history, language and politics in the Māori language newspapers / edited by Jenifer Curnow, Ngapare Hopa and Jane McRae.
“Collection of articles by scholars of Maori language who have researched Maori language newspapers from the 1840s into the twentieth century. The book uncovers Maori opinions on such matters as Maori representation in Parliament, the philanthropic and religious messages between Pakeha and Maori and Maori oratory and skilful use of the language.” (Syndetics summary)

Book & print in New Zealand : a guide to print culture in Aotearoa / edited by Penny Griffith, Ross Harvey, Keith Maslen, with the assistance of Ross Somerville.
“A guide to print culture in Aotearoa, the impact of the book and other forms of print on New Zealand. This collection of essays by many contributors looks at the effect of print on Maori and their oral traditions, printing, publishing, bookselling, libraries, buying and collecting, readers and reading, awards, and the print culture of many other language groups in New Zealand.” (Syndetics summary) 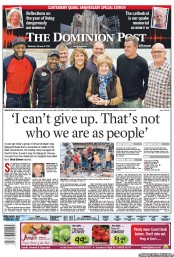 Did you know you can use our PressDisplay database to see over 1,700 newspapers (and magazines) from 92 countries in 48 languages – whenever and wherever you have internet access?  They are displayed exactly as you would see them in print – complete with all graphics, ads, notices – even the crossword!

To find PressDisplay click on the blue arrow next to ‘Select a database’ on mygateway.info, and scroll down to ‘PressDisplay newspapers’. You will find  today’s edition of your favourite papers or you can search, print, email or blog articles of interest in papers from around New Zealand and the world within the last 60 days. RSS feeds are also available so you can save time and get articles sent straight to you on your favourite topics.

You’ll need a Wellington City Libraries’ card to use PressDisplay – if you don’t have one at the moment and would like to become a member, visit our Joining pages for more information.

To learn more about using PressDisplay have a look at this quick printable guide.

Family History Month is underway and it was great to see so many people at our first lunchtime seminar on Tuesday who were interested in finding out more about using library resources to help with their genealogical research.

Our second free Ancestry in August talk this Tuesday (9th August, 12 noon – 1pm at Central Library) will be given by Emerson Vandy, Digital Services Manager of the National Library of  New Zealand.  Emerson will be talking about Papers Past, a popular database run by the National Library, which has opened up a huge new source of source of genealogical information for researching family history in New Zealand.   The collection of digitised newspapers and periodicals covers the years 1839 to 1945 and includes 68 publications from all regions of New Zealand.  You can use and search Papers Past for free on our computers at any of our branch libraries or from anywhere you have internet access.

Papers Past have just published their two-millionth page and to celebrate this landmark they are holding a competition called “Find yourself in the past/Lose yourself in the papers”.  To enter simply search Papers Past for your name and find the most interesting match for your namesake.  All entries go in the draw to win a Kobo e-book reader – click on the competition link for more details.