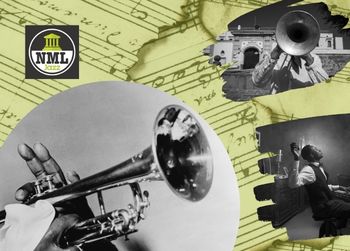 Have you checked out Naxos Jazz Library? It’s a music streaming service that showcases classic and contemporary jazz albums; as well as pop, rock, electronic, blues and more! Free with your Wellington City Libraries card, sign-in and discover a new favourite album from their selection of over 32,000 artists. With new music being added to the collection weekly, you’ll want to keep checking back for more gems.

Naxos Jazz Library also let’s you create personalised, ad free, playlists! What kind of playlist will you make? Here’s one I’ve put together, stream these tracks for an eclectic start to your week.

Tracks to start your Monday morning the right way:

AXEL FLÓVENT: You Stay by the Sea You Stay By The Sea is from the debut studio album by Icelandic singer-songwriter Axel Flóvent. It’s a soft, sleepy track that perhaps won’t get you out of bed quickly, but pairs perfectly with with snoozing your alarm for an extra few minutes.

ALAYNA: Glowing Next up, we’ve got a homegrown tune for you. Rotorua-born Alayna is an exciting R&B singer making waves and burning bright with their track, Glowing. The vibes are immaculate, it’s a bop guaranteed to perfectly accompany a smooth cup of coffee.

BANGS AND TALBOT: Sumthin’ Else! OK, time to get ready for the day. It’s a beautiful Wellington morning (hopefully), so open those curtains and great the sunny day with Bangs and Talbot’s shimmy inducing mod jazz track Sumthin’ Else!. The track’s flowing groove and toe-tapping syncopation is sure to be the perfect way to great the day.

ARK PATROL: King Now for something more upbeat. Hawaiian-born, Seattle-based producer Ark Patrol brings us this electronic jam, King, which will absolutely put some pep in your step. This tune, in my opinion, is best blasted from your car on the motorway, or through headphones while navigating the Lambton Quay lunch rush.

One of the most important and beloved labels of all time in jazz history, Riverside Records was founded by Orrin Keepnews and Bill Grauer in 1953, and produced many masterpieces by jazz giants such as Bill Evans, Thelonious Monk and Wes Montgomery. Although no physical CDs are available from our libraries at the moment, you can stream some of their finest albums on the Naxos Jazz Library. Riverside Records was short-lived and all their masters were acquired by Fantasy Records, making them difficult to locate in the Naxos Jazz Library. Instead, click the link to go straight to their discography and search the artists or titles. Check our picks below and start streaming now!

WYNTON KELLY TRIO AND SEXTET: KELLY BLUE
Performed by: Kelly, Wynton; Wynton Kelly Sextet; Wynton Kelly Trio
“Kelly was an original stylist, who had a lyrical and economical approach and a way of insinuating the blues into everything he touched. You can feel it here in the moving “Willow Weep for Me” and the bright takes on “Softly, As in a Morning Sunrise” and “On Green Dolphin Street,” just getting established as standards in the jazz repertoire and getting distinctive treatments here.” (adapted from amazon.com)

THELONIOUS MONK: BRILLIANT CORNERS
Performed by: Henry, Ernie; Monk, Thelonious; Pettiford, Oscar; Roach, Max; Rollins, Sonny
“Brilliant Corners is regarded as one of the finest albums in Thelonius Monks catalogue. The supporting musicians include Paul Chambers (better known for his work with Miles Davis), Max Roach, Clark Terry and Sonny Rollins, but it is Monks own work on piano that dominates the proceedings. An important and vital album, not just for Thelonius Monk, but for any serious jazz collector.” (adapted from amazon.com)

BILL EVANS TRIO: WALTZ FOR DEBBY
Performed by: Bill Evans Trio
“The legendary last recording of Evans’ brilliant trio (with Paul Motian and Scott LaFaro, who died days after this was taped at the Village Vanguard). Invigorating freedom and deep emotion meet and cast a powerful spell.” (adapted from amazon.com)

WES MONTGOMERY: FULL HOUSE
Performed by: Chambers, Paul; Cobb, Jimmy; Griffin, Johnny; Kelly, Wynton; Montgomery, Wes
“Recorded live at the the Tsubo in Berkeley, California, the back of the original album proudly proclaims ‘the top jazz guitarist, recorded in actual performance.’ It’s a rather undertstated introduction to an album that showcases to perfection Wes Montgomery’s abilities, a talent that no other jazz guitarist has come even close to matching.” (adapted from amazon.co.uk)

KENNY DREW TRIO: KENNY DREW TRIO
Performed by: Kenny Drew Trio
“Kenny Drew brings a pure bop angularity to this 1956 session, with driving single-note lines that clamber over one another to get at a new rhythmic detail, along with splashing chords that find the joy in the blues. He’s joined by a rhythm section that virtually defined the mid-1950s ethos: bassist Paul Chambers and drummer Philly Joe Jones.” (adapted from amazon.com)

CANNONBALL ADDERLEY SEXTET: IN NEW YORK
Performed by: Cannonball Adderley Sextet
“This excellent live date from the Village Vanguard was the recording debut of the Adderley sextet, with Cannonball waxing eloquently and swingingly on alto, brother Nat charging ahead on cornet, and the versatile Yusef Lateef adding a bit of an edge on tenor, flute, and unusually for a jazz wind player, oboe on the odd. Also, this was the first recorded appearance of pianist Joe Zawinul in Cannonball’s band.” (adapted from fishpond.co.nz)

RANDY WESTON: SOLO, DUO AND TRIO
Performed by: Blakey, Art; Gill, Sam; Weston, Randy
“Randy Weston’s distinctive compositions and pianism have long mined the music’s African sources to enrich the idiom. This CD presents Weston at the very beginnings of his recording career, combining his first two LPs. The earliest is a selection of eight Cole Porter tunes from 1954, played in duet with his regular partner, Sam Gill, a little-known bassist who provides solid and sympathetic foundations. The second combines a 1955 trio session, with Gill and Art Blakey on drums, and a series of solos from 1956.” (adapted from amazon.com)

In the Naxos Jazz Library, there are over 17,770 albums available and new albums are added weekly. It offers mostly jazz, of course, but you can also find some intriguing popular music offered by labels such as Nonesuch records.

Nonesuch Records started as a budget classical label in 1964, and since former ECM records executive Robert Hurwitz became president, it has evolved as one of the most forward thinking labels, offering albums by acclaimed unique musicians from a wide range of genres. The musicians who have issued albums on Nonesuch records include Bjork, Fleet Foxes, David Byrne, Black Keys, K.D. Lang, Wilco, Laurie Anderson and many more. Some of the finest albums by these musicians are available in this Naxos Jazz Library.

To find albums by Nonesuch records, click LABELS on the homepage of the Naxos Jazz Libray. Check out our staff picks below and start streaming now!

WILSON, Brian: Smile
Performed by: Wilson, Brian
It took from 1966 till 2004 for the full glory of the legendary lost masterpiece by the Beach Boys to finally see the light of day. This is Brian’s solo version of the work recorded from scratch and released after live performances received such positive reactions. It sounds much more cohesive , polished and finished than the subsequently released Beach Boys Smile sessions but lacks the subtly and sublime harmonic nuances that made the Beach Boys so great.

FLEET FOXES: Fleet Foxes
Performed by: Fleet Foxes
In their self titled debut album the Seattle based Fleet Foxes created something really special. Their folk rock styled harmonically soaked sound permeates every track. From the Bruegel painting on the front cover to the Crosby Stills and Nash harmonies you can hear and see the artists they love and who influence them yet they are always themselves they never get lost in their own record collection , instead delivering their unique , emotionally charged and uplifting music with grace and ease. Rightfully regarded as a modern classic.

ANDERSON, Laurie: Heart of a Dog
Performed by: Anderson, Laurie; Bernstein, Steven; Rathke, Mike; Reed, Lou; Saunders, Fernando; Scarpantoni, Jane; Shapiro, Paul; Smith, Tony Thunder; Wieselman, Doug
In many ways Laurie Anderson is a conceptual artist who just happens to work within the field of popular music . She came to the general music publics eye with the minimalist unexpected hit O superman. And like most of her work this soundtrack to the film of the same title Heart of a dog is a piece that operates and functions on May levels simultaneously. It is a meditation on the death of both her dog and her husband Lou Reed , it is about love and grief art and emotion and The Tibetan book of the dead and many other things all filtered through the prism that is Laurie Anderson’s mind . It also has wit and dry deadpan humour in an album that is light of touch and deeply profound.

BJÖRK: Biophilia
Performed by: Bjork,
Biophilia is the cutting edge, every experimental, constantly changing Björk’s eighth full-length release. It is wildly ambitious nature themed and has close tie ins with non traditional music partners like Apple and the National Geographic not to mention a narration by no less than David Attenborough . The music is as revolutionary as the ideas that circle it , sounding like a sound lab of her own creation and featuring electronics, sounds from nature and specially created invented instruments. It is an innovative masterclass in redefining music and sound all orchestrated in Björk’s uniques fashion yet it never feels forced or contrived.

MAGNETIC FIELDS (THE): 50 Song Memoir
Performed by: Magnetic Fields, The