“Art, in itself, is an attempt to bring order out of chaos.” – Stephen Sondheim

Sadly, there have been a number of notable deaths of well-known figures this year, but among the most significant was the passing of musical theatre titan, Stephen Sondheim. Passing at the age of 91 at the end of November, Sondheim redefined musical theatre over his more than sixty year career. He notably collaborated on West Side Story with another renowned composer, Leonard Bernstein, and was mentored by Oscar Hammerstein II, of the famous musical theatre duo, Rogers and Hammerstein. Sondheim began his musical theatre career as a lyricist, before going on to both write and compose. Some of his most notable works are: A Funny Thing Happened on the Way to the Forum (1962), Sweeney Todd: The Demon Barber of Fleet Street (1979), and Into the Woods (1987). See below for some of our holdings both by and about Stephen Sondheim.

The story so far… / Sondheim, Stephen
“Stephen Sondheim: The Story So Far is a four-CD box set of 82 recordings of music by the Broadway songwriter, with a running time just under five hours. It is far from the first compilation of Sondheim’s work, or even the first box set, but it follows a pattern in such compilations and in box sets in general, in that the selection seems aimed at two different classes of potential purchasers, those general fans looking for a single omnibus collection of the best or most popular of an artist’s efforts, and the aficionados primarily interested in rarities”. ~ William Ruhlmann” (Abridged from the catalogue)

Stephen Sondheim : a life / Secrest, Meryle
“”In the first full-scale life of the most important composer-lyricist at work in musical theatre today, Meryle Secrest draws on her extended conversations with Stephen Sondheim as well as on her interviews with his friends, family, collaborators, and lovers to bring us not only the artist – as a master of modernist compositional style – but also the private man.” “We see Sondheim at work with composers, producers, directors, co-writers, actors, the greats of his time and ours, among them Leonard Bernstein, Ethel Merman, Richard Rodgers, Oscar Hammerstein, Jerome Robbins, Zero Mostel, Bernadette Peters, and Lee Remick (with whom it was said he was in love, and she with him), as Secrest vividly re-creates the energy, the passion, the despair, the excitement, the genius, that went into the making of show after Sondheim show.”–BOOK JACKET. Title Summary field provided by Blackwell North America, Inc. All Rights Reserved” (Catalogue)

Sondheim’s Broadway musicals / Banfield, Stephen
“The first in-depth look at the work and career of one of the most important figures in the history of musical theater.” (Catalogue)

Finishing the hat : the collected lyrics of Stephen Sondheim with attendant comments, principles, heresies, grudges, whines and anecdotes / Sondheim, Stephen
“The winner of seven Tonys, seven Grammys, an Oscar, and a Pulitzer Prize, Stephen Sondheim has become synonymous with the best in musical theatre. Now, in Finishing the Hat, he has not only collected his lyrics for the first time, he’s giving readers a rare, personal look into his extraordinary shows and life. Along with the lyrics, both published and unpublished, for all of his productions from 1954 to 1981 – including West Side Story, Company, Follies, A Little Night Music, and Sweeney Todd, which have starred some of the most famous and talented actors in the world from Johnny Depp and Catherine Zeta Jones, to Judi Dench and Alan Rickman, Finishing the Hat is a celebration of the act of creation. Sondheim discusses his relationship with his mentor, Oscar Hammerstein II, and his collaborations with legends Leonard Bernstein, Richard Rodgers, Angela Lansbury, and countless others.  (Abridged from the catalogue)

Look, I made a hat : collected lyrics (1981-2011) with attendant comments, amplifications, dogmas, harangues, digressions, anecdotes and miscellany / Sondheim, Stephen
“Filled with behind-the-scenes photographs and illustrations from original manuscripts, and with the same elegant design as the earlier book, ‘Look, I Made A Hat’ will be devoured by Sondheim’s passionate fans today and for years to come.” (Catalogue) 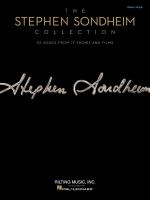 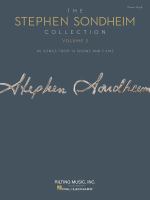 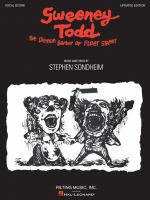 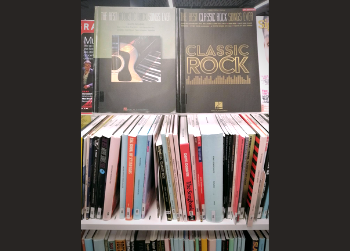 Calling all musicians and aficionados of musical theatre! Did you know that we have a collection of Songbooks at our newest Central City branch, Te Awe Library on Brandon Street? Before Central closed, it was home to a large collection of Songbooks and music Scores. These are all now available to reserve from our warehouse. But if you would like to browse some Songbooks in person, you can find them upstairs at Te Awe, nestled amongst the CD collection, and next to the music magazines. There is a great selection of songs held there including, rock, pop, standards, musicals, folk, and movie songs, with instructions for piano, vocal and guitar.

You can find our Te Awe branch just off Lambton Quay at 29 Brandon Street, or you can enter from Panama Street. In addition to the Songbooks and CDs upstairs, you will find young adult books, non-fiction and Māori books, DVDs and Blu-ray. On the ground floor there are magazines, a children’s area, adult fiction, large print, audiobooks, bestsellers, and a café! So take a look today!