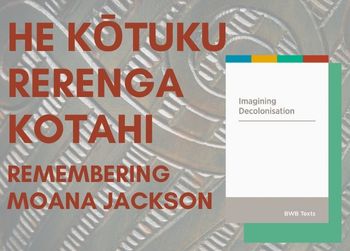 As 29 April 2022 approaches, the effects of Covid19 means that once more Wellington City Libraries will not mark the signing of Te Tiriti in Te Whanganui-a-Tara with a three-pronged kōrero –i.e. a mana whenua summary of past actions, informed discussion of present aspects of te tiriti and then future thoughts as in: where to now.

The burning question for today is he kupu – “co-governance”.

How I wish that we could call upon Moana to offer up a wise, quiet, succinct non-inflammatory explanation, but, alas, he is no longer with us. This month we are totally devastated by his passing, and the many pages of social media commentary have highlighted and refreshed for us his many words of wisdom. Here was a man who quietly touched the hearts of so many people, yet remained absolutely centred on his whānau.

In his kōrero for the launch of “Imagining decolonisation” at Unity Books, he told us how he would approach an upcoming kōrero by going for a long walk, in order to think carefully of the words and ideas he wished to impart. And often his delivery would begin (or end) with a quiet little story involving a grandchild, and a vision for us all through a child’s lens.

Moana Jackson: His legacy will endure, via E-Tangata

Moana Jackson was the most articulate, original and forceful intellectual of his generation, via The Guardian

Moana Jackson has left us with the drive to keep fighting, via The Spinoff

Below is a list of books written by Moana Jackson, which are held in the library’s collection:

Like a beached whale : a consideration of proposed Crown actions over Maori foreshore claims / Jackson, Moana

The Maori and the criminal justice system : a new perspective = He whaipaanga hou / Jackson, Moana

We will not fill the void left by this unique man who had the ability to speak so softly with such devastatingly uncompromising words in explanation of Te Whakaputanga me Te Tiriti.