Wellington City Libraries now holds Cyrus Hingston’s Pou o Whakaue: marae of Whakaue, and we look forward to the arrival of his companion book, Pou o Ue. Rangi Matamua published Matariki the star of the year, and we welcome now the reo Māori edition, Matariki: te whetū tapu o te tau. Finally, some very interesting thoughts on kaupapa Māori by a collection of of our favourite authors and scholars.

Pou o Whakaue : marae of Whakaue / Cyrus Gregory Tauahika Hingston.
“Pou o Whakaue is a history of eight marae of Whakaue – the tupuna, the whenua, the whare, the tangata whenua and their memories of the marae, the relationships to the ancestor Whakaue and Te Arawa whanui.” (Syndetics summary) 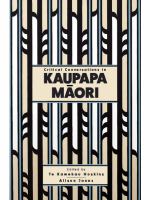 Matariki : te whetū tapu o te tau / Rangi Matamua.
“In midwinter, Matariki rises in the pre-dawn sky, and its observation is celebrated with incantations on hilltops at dawn, balls, exhibitions, dinners and a vast number of events. The Matariki tradition has been re-established, and its regeneration coincides with a growing interest in Māori astronomy. Still, there remain some unanswered questions about how Matariki was traditionally observed. What is Matariki? Why did Māori observe Matariki? How did Māori traditionally celebrate Matariki? When and how should Matariki be celebrated? This book seeks answers to these questions and explores what Matariki was in a traditional sense so it can be understood and clebrated in our modern society.” (Back cover)

Juridical encounters : Māori and the colonial courts, 1840-1852 / Shaunnagh Dorsett
“From 1840 to 1852, the Crown Colony period, the British attempted to impose their own law on New Zealand. In theory Maori, as subjects of the Queen, were to be ruled by British law. But in fact, outside the small, isolated, British settlements, most Maori and many settlers lived according to tikanga … Shaunnagh Dorsett examines the shape that exceptional laws took in New Zealand, the ways they influenced institutional design and the engagement of Maori with those new institutions, particularly through the lowest courts in the land.” (Syndetics summary)

By their fruits you will know them : early Māori leaders in the Mormon Church. Volume 2 / edited by Selwyn Katene.
“This book follows ‘Turning the Hearts of the Children’, exploring why so many Māori in the 1880s were inspired to question the mainstream churches and flock to the Church of Jesus Christ of Latter-day Saints, the Mormon church.” (Book jacket)

These two hands : a memoir / Renée.
“Renee Paule lives in Otaki and teaches her Your Life, Your Story and her Poem a Week workshops there. This is just one version of her life, her story, told in patches, like a quilt.” (Syndetics summary)

The fuse box : essays on writing from Victoria University’s International Institute of Modern Letters / edited by Emily Perkins and Chris Price.
“From Victoria University’s International Institute of Modern Letters, The Fuse Box offers writing strategies and guidance on keeping the faith from some of our best writers. Starting with the instigating spark, through to currents and connections, these essays shine a light on the creative process. They explore what to write about and how to get started, how to keep the flow going over time, freedom and constraint, how your writing might meet the world, and how to make the most of accidents. Poets, dramatists, novelists and writing teachers open up to reveal their wiring in essays that are strikingly honest, political and playful.” (Syndetics summary)
p. 91. The story that matters by Tina Makereti.
p. 204. Patricia Grace : an interview with Briar Grace-Smith

New Zealand between the wars / edited by Rachael Bell.
“If World War One was the crucible that forged an independent New Zealand identity, then the two decades following are surely the years in which the foundation for the new nation was laid. In shedding the last vestiges of colonial society in exchange for the trappings of a modern democratic nation, the 1920s and 1930s in New Zealand set a blueprint for state intervention and assistance that remained unchallenged for the next 50 years.” (Syndetics summary)
Chap. 5. Once were muttonbirders: Ngāti Kuia’s flight to retain its Tītī harvesting rights by Peter Meihana.