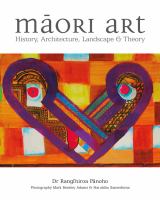 Māori art : history, architecture, landscape and theory / Rangihiroa Panoho ; with photographs by Mark Adams & Haruhiko Sameshima.
“Up until now books on Maori art have described the work as either traditional (carving, weaving, painting) or contemporary, work produced post-1950s. This book presents a unique focus on Maori art by exploring the connection between the traditional and contemporary, and the place of Maori art within an international context. Maori Art provides a framework for looking at Maori art in a new way and fills a gap in Maori art history – while there are myriad surveys of Maori art there is currently very little critical writing on Maori art and artists”….(Syndetics summary)

Heke-nuku-mai-nga-iwi Busby : not here by chance / Jeff Evans.
“This biography of Heke-nuku-mai-nga-iwi Busby brings together the varied life experiences that have made Hec Busby the master waka builder, waka expert, celestial navigator and highly regarded Te Rarawa elder that he is today. He is one of the few active waka taua builders and is responsible for the completion of more than a dozen of these waka for iwi around the country… His entrepreneurial and leadership skills along with his tribal and tikanga knowledge have led to his involvement in iwi activities as well as in organising Waitangi commemorations, kapa haka, ocean-going voyages, and waka wananga to pass on his knowledge to the next generation.” (Syndetics summary)

The good doctor : breaking the rules, making a difference / Lance O’Sullivan with Margie Thomson.
“Lance O’Sullivan is a man on a mission. Raised in Auckland by a solo mother, he had a modest upbringing typical of the time, if one chequered with difficulties. After being expelled from two schools, Lance could have gone off the rails. Instead, he found his way at Hato Petera College, connecting with his Māori ancestry, and going on to study medicine… For his work, Lance has been acknowledged as a Sir Peter Blake Emerging Leader, Public Health Champion, Māori of the Year and, most recently, Kiwibank New Zealander of the Year. Passionate, brave and free-thinking, Lance stood up when no one else would…”–Publisher information.

Tauira : Māori methods of learning and teaching / Joan Metge.Based on extensive interviews, this book offers a window on a mid-twentieth-century rural Māori world as described by those who grew up there. Metge’s work tackles important questions about Māori teaching and learning of this period. What was the role of whānau and hapū, household and marae, kaumātua and siblings, work and play? How much learning was practical and how much by teaching?”–Publisher information. Includes bibliographical references and index.
Contents: Chapter 1: Voices from the Past — Chapter 2: Learning as Part of Living — Chapter 3: Teaching and Learning — Chapter 4: Spirituality and Values — Chapter 5: Learning in Maturity as Part of Living — Chapter 6: Storehouses of Knowledge — Chapter 7: Wānanga — Chapter 8: Storytelling — Chapter 9: Learning in the School System — Chapter 10: Educational Practices and Principles.

At the margin of Empire : John Webster and Hokianga, 1841-1900 / Jennifer Ashton.
“Born in Scotland in 1818, John Webster came in New Zealand via Australia in 1841 after narrowly escaping death in the outback following a violent encounter with a group of Aboriginal men. He spent most of the rest of his life in the Hokianga region, carving out a fortune as the region’s leading timber trader and cultivating connections with the leading political figures of the day… Webster was also engaged with Pākehā and the Crown – friends with Frederick Maning, visited by George Grey, Richard Seddon and others… Ashton argues that through his daily interactions, Webster helped slowly shift the balance of power in the North: the credit that he extended to his customers and kin saw them selling land to pay debts, helping push Māori into economic dependence”–Publisher information.

Entanglements of empire : missionaries, Māori, and the question of the body / Tony Ballantyne.
“The first Protestant mission to New Zealand, established in 1814, saw the beginning of complex political, cultural, and economic entanglements with Maori. ENTANGLEMENTS OF EMPIRE is a deft reconstruction of the cross-cultural translations of this early period… Maori and missionaries struggled over issues of hygiene, tattooing, clothing, and sexual morality and missionaries found it was difficult to maintain their own practices because of their dependence on Maori chiefly patrons as well as the material constraints and social conflicts. ….” (Syndetics summary)

Panguru and the city : kāinga tahi, kāinga rua : an urban migration history / Melissa Matutina Williams.
“Travelling from Hokianga to Auckland in the middle decades of the twentieth century, the people of Panguru established themselves in the workplaces, suburbs, churches and schools of the city. Melissa Matutina Williams writes from the heart of these communities. The daughter of a Panguru family growing up in Auckland, she writes a perceptive account of urban migration through the stories of the Panguru migrants. Through these vibrant oral narratives, the history of Maori migration is relocated to the tribal and whanau context in which it occurred. For the people of Panguru, migration was seldom viewed as a one-way journey of new beginnings; it was experienced as a lifelong process of developing a ‘co-existent home place’ for themselves and future generations. Dreams of a brighter future drew on the cultural foundations of a tribal homeland and past. PANGURU AND THE CITY: HE KAINGA RUA traces their negotiations with people and places, from Auckland’s inner-city boarding houses, places of worship and dance halls to workplaces and Maori Affairs’ homes in the suburbs. It is a history that will resonate with Maori from all tribal areas who shared in the quiet task of working against state policies of assimilation, the economic challenges of the 1970s and neoliberal policies of the 1980s in order to develop dynamic Maori community sites and networks which often remained invisible in the cities of Aotearoa New Zealand.” (Syndetics summary)

Māori carving : the art of recording Māori history / contributing writers, Malcolm Mulholland and Robyn Bargh.
“This photograph-rich book shows and describes the process of carving, covering the types of materials and tools used, the carving strokes and surface patterns and different regional styles. It shows the range of items carved from meeting houses to musical instruments, waka or canoes, storehouses, weapons and ceremonial items, such as boxes and staffs, and gives detailed information on the carving of wharenui or meeting houses – the epitome of the carver’s art. Information is given on how to read and understand a carving, looking in depth at parts of carvings and what to look for in elements such as the head, arms and hands of figures and the surface patterns used. The patterns and body styles are described and accompanied by detailed photographs that make identification of the elements easy. This is part of a series of four books on aspects of Maōri culture. The others are: Geothermal Treasures: Māori Living with Heat and Steam; Māori Weaving: The Art of Creating Māori Textiles; and Marae: The Heart of Māori Culture”–Publisher information.

Marae : the heart of Māori culture / contributing writers, Malcolm Mulholland and Robyn Bargh.
“”Step-by-step guide to a powhiri, or welcome ceremony, showing and describing what happens, the people involved, what they do, and the values and understandings underpinning the ceremony. There is also a close look at the outside and inside of a wharenui, or meeting house, showing each of the elements and features that make it up. Maori cultural concepts are explained and discussed and a glossary of Maori terms is provided”–Publisher information.” (Syndetics summary)

Geothermal treasures : Māori living with heat and steam / contributing writers, Vanessa Bidois, Cherie Taylor and Robyn Bargh.
“”Natural geothermal phenomena – geysers, hot springs and mud pools – have drawn people to the thermal region of New Zealand for years. Locals and tourists are captivated by the beauty and magic of bubbling mud, steam and hot water gushing from the earth. New Zealand’s world-class geothermal resource is a source of energy, a tourist attraction and a treasure of great historical, cultural, spiritual and economic importance for Maori. In this book, Maori traditional stories, understandings and history stand alongside geothermal science in an exploration of the thermal phenomena of the Volcanic Plateau. Beautiful photographs show the hot pools, rising steam, geysers, bubbling mud and thermal formations that visitors see, and the text provides information about the natural history of the area, its formation and its significance to Maori. This is part of a series of four books on aspects of Maori culture. The others are: Maori Carving: The Art of Preserving Maori History; Maori Weaving: The Art of Creating Maori Textiles; and Marae: The Heart of Maori Culture”–Publisher information.” (Syndetics summary)