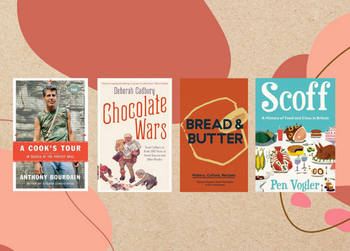 Is there anything quite as comforting to read about than food? Be it the biography of a chef or food critic, a history of a particular food, or just a really good cook book, books about food have been a favourite for generations. Here are some books in our collection that you might like to sink your teeth into:

Scoff : a history of food and class in Britain / Vogler, Pen
“Avocado or beans on toast? Gin or claret? Nut roast or game pie? Milk in first or milk in last? And do you have tea, dinner or supper in the evening? In this fascinating social history of food in Britain, Pen Vogler examines the origins of our eating habits and reveals how they are loaded with centuries of class prejudice. Bringing together evidence from cookbooks, literature, artworks and social records from 1066 to the present, Vogler traces the changing fortunes of the food we encounter today, and unpicks the aspirations and prejudices of the people who have shaped our cuisine for better or worse.” (adapted from catalogue)

A cook’s tour : in search of the perfect meal / Bourdain, Anthony
“Inspired by the question, ‘What would be the perfect meal?’, Anthony sets out on a quest for his culinary holy grail. Our adventurous chef starts out in Japan, where he eats traditional Fugu, a poisonous blowfish which can be prepared only by specially licensed chefs. He then travels to Cambodia, up the mine-studded road to Pailin into autonomous Khmer Rouge territory and to Phnom Penh’s Gun Club, where local fare is served up alongside a menu of available firearms. In Saigon, he’s treated to a sustaining meal of live Cobra heart before moving on to savor a snack with the Viet Cong in the Mecong Delta. A Cook’s Tour recounts, in Bourdain’s inimitable style, the adventures and misadventures of America’s favorite chef.” (adapted from catalogue)

Hungry : a memoir of wanting more / Dent, Grace
“From an early age, Grace Dent was hungry. As a little girl growing up in Currock, Carlisle, she yearned to be something bigger, to go somewhere better. Hungry traces Grace’s story from growing up eating beige food to becoming one of the much-loved voices on the British food scene. It’s also everyone’s story – from treats with your nan, to cheese and pineapple hedgehogs, to the exquisite joy of cheaply-made apple crumble with custard. Warm, funny and joyous, Hungry is also about love and loss, the central role that food plays in all our lives, and how a Cadbury’s Fruit ‘n’ Nut in a hospital vending machine can brighten the toughest situation.” (adapted from catalogue)

In the devil’s garden : a sinful history of forbidden food / Allen, Stewart Lee
“Among the foods thought to encourage Lust, the love apple (now known as the tomato), has become the world’s most popular vegetable. But until the nineteenth century the love apple was considered Satanic by many because of its similarity to the mandrake, a plant believed to be possessed by demonic spirits. Filled with Incredible history and the author’s travels to many exotic locales, In the Devil’s Garden also features recipes like the Matzoh-ball stews outlawed by the Spanish Inquisition and the forbidden “chocolate champagnes” of the Aztecs. This is truly a delectable book that will be consumed by food lovers, culinary historians, amateur anthropologists, and armchair travellers alike.” (adapted from catalogue)

Toast / Slater, Nigel
“TOAST is top food writer Nigel Slater’s eat-and-tell autobiography. Detailing all the food, recipes and cooking that have marked his passage from greedy schoolboy to great food writer, this is also a catalogue of how the British have eaten over the last three decades.” (Catalogue) 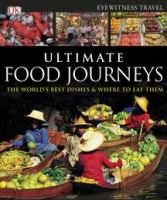 Ultimate food journeys : the world’s best dishes & where to eat them
“[A] book for food-lovers with an interest in travel–and ardent travelers with a passion for food. … [also] has helpful sightseeing itineraries, hotel recommendations, and hundreds of restaurant choices.” (Catalogue)

Plenty : a memoir of food & family / Howard, Hannah
“A moving reflection on motherhood, friendship, and women making their mark on the world of food from the author of Feast” (Catalogue)

Chocolate wars : from Cadbury to Kraft : 200 years of sweet success and bitter rivalry / Cadbury, Deborah
“Beginning with an account of John Cadbury, who founded the first Cadbury’s coffee and chocolate shop in Birmingham in 1824, ‘Chocolate Wars’ goes on to chart the astonishing transformation of the company’s fortunes under his grandson George. But while the Cadbury dynasty is the fulcrum of the narrative, this is also the story of their Quaker rivals, the Frys and Rowntrees, and their European competitors, the Nestles, Suchards and Lindts. These rivalries drove the formation of the huge chocolate conglomorates that still straddle the corporate world today, and have first call on our collective sweet tooth.” (adapted from catalogue) 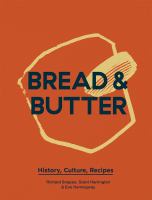 Food isn’t medicine : challenge nutribollocks & escape the diet trap / Wolrich, Joshua
“The first NHS doctor to take a public stand against diet culture and empower you to do the same. Losing weight is not your life’s purpose. Do carbs make you fat? Could the keto diet cure mental health disorders? Are eggs as bad for you as smoking? No, no and absolutely not. It’s all what Dr Joshua Wolrich defines as ‘nutribollocks’ and he is on a mission to set the record straight. As an NHS doctor with personal experience of how damaging diets can be, he believes every one of us deserves to have a happy, healthy relationship with food and with our bodies. His message is clear- we need to fight weight stigma, call out the lies of diet culture and give ourselves permission to eat all foods. Food Isn’t Medicine wades through nutritional science (both good and bad) to demystify the common diet myths that many of us believe without questioning. If you have ever wondered whether you should stop eating sugar, try fasting, juicing or ‘alkaline water’, or struggled through diet after diet (none of which seem to work), this book will be a powerful wake-up call. Drawing on the latest research and delivered with a dose of humour, it not only liberates us from the destructive belief that weight defines health but also explains how to spot the misinformation we are bombarded with every day. Dr Joshua Wolrich will empower you to escape the diet trap and call out the bad health advice for what it really is: complete nutribollocks.” (Catalogue)