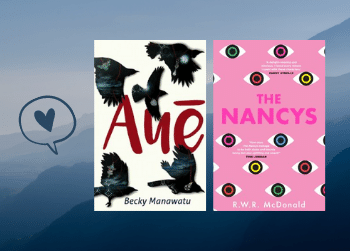 Congratulations to the finalists and winners of the 2020 The Ngaio Marsh Awards!

The Ngaio Marsh Awards are presented annually and promote and celebrate excellence in crime, mystery and thriller writing by New Zealand authors.

This year’s winner for best novel was:

Auē, by Becky Manawatu
“Taukiri was born into sorrow. Auē can be heard in the sound of the sea he loves and hates, and in the music he draws out of the guitar that was his father’s. It spills out of the gang violence that killed his father and sent his mother into hiding, and the shame he feels about abandoning his eight-year-old brother to another violent home. But Arama is braver than he looks, and he has a friend and his friend has a dog, and the three of them together might just be strong enough to turn back the tide of sorrow. As long as there’s aroha to give and stories to tell and a good supply of plasters.” (Catalogue)

And the Best First Novel was won by:

The Nancys by R.W.R. McDonald.
“Tippy Chan is eleven and lives in a small town in a very quiet part of the world – the place her Uncle Pike escaped from the first chance he got as a teenager. Now Pike is back with his new boyfriend Devon to look after Tippy while her mum’s on a cruise. Tippy is in love with her uncle’s old Nancy Drew books, especially the early ones where Nancy was sixteen and did whatever she wanted. She wants to be Nancy and is desperate to solve a real mystery. When her teacher’s body is found beside Riverstone’s only traffic light, Tippy’s moment has arrived. She and her minders form The Nancys, a secret amateur detective club. But what starts as a bonding and sightseeing adventure quickly morphs into something far more dangerous…” (Publisher description)

We wish to extend a big congratulations to all of this year’s finalists and winners. Well done all!

We recently were lucky enough to get some of the shortlisted authors to give us some exclusive interviews and readings from the books – have a watch below:

I feel like everybody else is an author, and I’m just an ordinary person who wrote a book. And my book’s kind of about that impostor syndrome, of feeling like you’re not really the real thing.

Debut New Zealand author Rose Carlyle is living every budding writer’s dream — her first novel, The girl in the mirror, has had book publishers competing and major Hollywood studios vying to snap up the film rights. A lawyer who lives in Auckland with her three children, she wrote her debut novel early in the morning before work and family life.

Several commentators have already said she looks set to be the next big thing in New Zealand publishing. Be one of the first to read what the fuss is about by reserving a copy!

The girl in the mirror / Carlyle, Rose
“Identical twins only look the same … Beautiful twin sisters Iris and Summer are startlingly alike, but beyond what the eye can see lies a darkness that sets them apart. Cynical and insecure, Iris has long been envious of open-hearted Summer’s seemingly never-ending good fortune, including her perfect husband Adam. Called to Thailand to help sail the family yacht to the Seychelles, Iris nurtures her own secret hopes for what might happen on the journey. But when she unexpectedly finds herself alone in the middle of the Indian Ocean, everything changes. ” (Adapted from Catalogue)