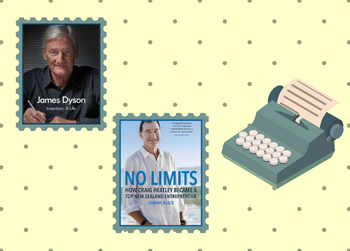 From Sky TV to Tesla and from Dyson to Cadbury Chocolate; read the legendary stories of the genius brains behind the big brands; their lives, their difficult times and how they thrive on success.

Invention : a life / Dyson, James
“Famously, over a four-year period, James Dyson made 5,127 prototypes of the cyclonic vacuum cleaner that would transform the way houses are cleaned around the world. Dyson reveals how he came to set up his own company and led it to become one of the most inventive technology companies in the world. Dyson has always looked to the future, even setting up his own university to help provide the next generation of engineers and designers. It is a compelling and dramatic tale.” (Adapted from the Catalogue)

Elon Musk : how the billionaire CEO of SpaceX and Tesla is shaping our future / Vance, Ashlee
“Elon Musk, the renowned entrepreneur and innovator behind SpaceX, Tesla, and SolarCity, sold one of his internet companies, PayPal, for $1.5 billion. The author captures the genius’s life and work, from his tumultuous upbringing in South Africa and flight to the United States to his dramatic technical innovations and entrepreneurial pursuits. Musk has dedicated his energies and fortune to inventing a future comparable to science-fiction fantasy.” (Adapted from the Catalogue)

No limits : how Craig Heatley became a top New Zealand entrepreneur / Black, Joanne
“No Limits describes Craig Heatley’s entrepreneurial life. It charts his philosophies, his approach to currency trading and the significance of joining the world’s most prestigious golf club, Augusta National, home of the Masters. It is Sky Television that was his boldest and most precarious undertaking. The fledgling company teetered in the early nineties as rugby suffered its own crisis, torn between its amateur heritage and the forces of professionalism.” (Adapted from the Catalogue)

Chocolate wars : from Cadbury to Kraft : 200 years of sweet success and bitter rivalry / Cadbury, Deborah
“Deborah Cadbury takes a journey through this award-winning documentary into her own family history to uncover the 250 years of chocolate empire-building. John Cadbury founded the first Cadbury’s coffee and chocolate shop in Birmingham in 1824; then his grandson George made this company’s fortune. This is also the story of their Quaker rivals, the Frys and Rowntrees, and their European competitors, the Nestles, Suchards and Lindts.” (Adapted from Overdrive)

The contrarian : Peter Thiel and Silicon Valley’s pursuit of power / Chakin, Max
“A biography of venture capitalist and entrepreneur Peter Thiel, the enigmatic, controversial and hugely influential power broker who sits at the dynamic intersection of tech, business and politics. Since the days of the dot-com bubble in the late 1990s, no industry has made a greater global impact than Silicon Valley.” (Catalogue)