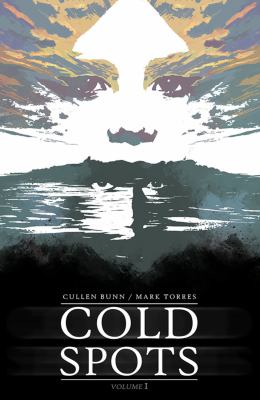 This month the comic fest is ample illustration that the variety of illustrators, styles and stories to be told are multiple!

This month’s new selection of graphic novels range from creepy horror to tender teenage explorations, epic stories to private landscapes laid bare. Authors and illustrators from Mark Torres to Neil Gaiman bring you tales that tingle with inner recognition or launch you into fantastic realms. Enjoy!

Explore  our collections with the benefit of free reserves, delivering your selection to any open branch that you choose!

Cold spots / created by Cullen Bunn, story, & Mark Torres, art & design.
“A tale of spine-tingling horror, psychological fright, the undead, and the bitter cold of a supernatural winter come together in this account of unexpected twists and mounting dread. Dan Kerr turned his back on his wife and unborn daughter 10 years ago. Now, both mother and child have gone missing, and Dan must embark on a weird tale of cosmic terror in order to find them again! Ghosts stir when Dan’s estranged daughter is near, and as the dead grow restless, the cold deepens.” (Syndetics summary)

Through a life / Tom Haugomat.
“This powerfully silent graphic novel follows the saga of a boy who grows up to be an astronaut, just like he always wanted, until a fatal space shuttle crash upends his life, and he begins to find solace in beauty here on earth. Told through a series of poignant vignettes, Through A Life is a sweeping story of dreams, expectations, nature, and loss. Rodney spends his life looking through.” (Catalogue)

Kid gloves : nine months of careful chaos / Lucy Knisley.
“If you work hard enough, if you want it enough, if you’re smart and talented and “good enough,” you can do anything. Except get pregnant. Her whole life, Lucy Knisley wanted to be a mother. But when it was finally the perfect time, conceiving turned out to be harder than anything she’d ever attempted. Fertility problems were followed by miscarriages, and her eventual successful pregnancy was plagued by health issues, up to a dramatic, near-death experience in labor and delivery. Kid Gloves follows Lucy’s personal transition into motherhood, and it also illustrates the history and science of reproductive health from all angles, full of curious facts and inspiring (and notorious) figures in medicine and midwifery.” (Syndetics summary)

Neil Gaiman & Charles Vess’ Stardust : being a romance within the Realms of Faerie.
“It is here in Wall that young Tristran Thorn loses his heart to the town beauty-a woman who is as cold and distant as the star she and Tristran see fall from the sky on a crisp October evening. To gain the hand of his beloved, Tristran rashly vows to fetch the fallen star and embarks upon a lover’s quest that will carry him over the ancient wall and into a world beyond his wildest imagings…” (Syndetics summary)

Vietnamese memories. Book 2, Little Saigon / Clement Baloup ; translators, Ceri Pollard with help from Hannah Flixter, Alessandra Cazes, and Olivia Hanks ; Fabrice Sapolsky and Alex Donoghue, U.S. edition editors.
“The personal stories of five family members, over five different time periods, as they are respectively forced to leave their home country of Vietnam when outside forces or inner turmoil shatter their normal lives. Each story follows the journey of a family member as they must leave everything behind, adapt to a new country and culture, and live with the nostalgia of their homeland and their people.” (Syndetics summary)

Bloom / written by Kevin Panetta ; artwork by Savanna Ganucheau.
“Now that high school is over, Ari is dying to move to the big city with his ultra-hip band, if he can just persuade his dad to let him quit his job at their struggling family bakery. Though he loved working there as a kid, Ari cannot fathom a life wasting away over rising dough and hot ovens. But while interviewing candidates for his replacement, Ari meets Hector, an easygoing guy who loves baking as much as Ari wants to escape it. As they become closer over batches of bread, love is ready to bloom . . . that is, if Ari doesn’t ruin everything.” (Adapted from Syndetics summary)

Letter to survivors / by Gébé; translated and with an introduction by Edward Gauvin.
“In the blasted ruins of what was once a picture-perfect suburb, nothing stirs-except the postman. Clad in a hazmat suit and mounted on a bicycle, he is still delivering the mail, nuclear apocalypse or no nuclear apocalypse. One family has taken refuge in an underground fallout shelter, and to them he brings-or, rather, shouts through the air vent-a series of odd, anonymous letters. They describe the family’s prosperous past life, and then begin to get stranger” (Adapted from Syndetics summary)

Fante Bukowski three : a perfect failure / Noah Van Sciver.
“After another year of living in the great American Midwest, self-styled erudite and superstar-to-be Fante Bukowski has a final showdown between his father and his dreams, is hired to ghostwrite a teen celebrity’s memoir, and attends his first local zine fest. Meanwhile, there are hidden forces working behind the scenes to push Fante Bukowski into the critical and financial success he’s always longed for, despite his continued lack of talent.” (Syndetics summary)