Need some motivation to go out and do great deeds today?  These books containing various heroic exploits may just provide the added push you need!

Resolution : the story of Captain Cook’s second voyage of discovery / Peter Aughton.
“On 13 July 1772, a year and a day after James Cook had returned to England having claimed Australia and New Zealand for the British crown, he set sail again on another voyage to the Pacific with two ships, the Resolution and the Adventure, to complete his search for lands in the southern hemisphere. This three-year venture still remains the greatest exploratory voyage ever undertaken in the far southern waters of the Indian, Pacific and Atlantic oceans. No other sailing ship has ever been further south through the ice. This was an epic voyage. The Pacific Ocean, covering more than a quarter of the earth’s surface, still had great lonely expanses where no ship had ever sailed. Numerous small islands had been spotted over the previous 250 years but nearly all had been sightings and not landings; even of the landings many were unvisited since their first discovery. Fresh food and water supplies were always a problem – and scurvy always a worry, in spite of the eighty barrels of sauerkraut they took with them. They also took invaluable instruments supplied by the Board of Longitude, not least a copy of Harrison’s fourth marine chronometer.” (Book jacket) 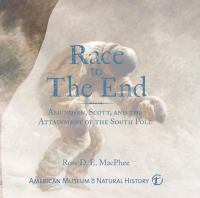 Race to the end : Amundsen, Scott, and the attainment of the South Pole / Ross D.E. MacPhee.
“Between 1910 and 1912, parties led by Norway’s Roald Amundsen and England’s Robert Scott made simultaneous attempts to be the first to reach the South Pole. Both parties attained the pole (Amundsen’s first, Scott’s second), but only Amundsen and his comrades returned alive. In a handsome volume that accompanies the American Museum of Natural History’s exhibit on the Scott and Amundsen expeditions, curator MacPhee sheds new light on this well-known story of triumph and tragedy. His text is complemented by a treasure trove of photos, maps, journals, and artifacts (some seen here for the first time). Seamlessly combining high adventure with meticulous documentation, this book will have broad appeal. Includes five contemporary panoramas showing Scott’s journey, as well as two vertical maps.” (Syndetics summary) 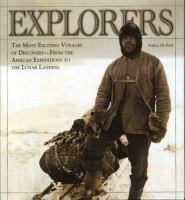 Xanadu : Marco Polo and Europe’s discovery of the East / John Man.
“Marco Polo’s journey from Venice, through Europe and most of Asia, to the court of Kublai Khan in China is one of the most audacious in history. His account of his experiences, known simply as The Travels, uncovered an entirely new world of emperors and concubines, great buildings — ‘stately pleasure domes’ in Coleridge’s dreaming; huge armies and imperial riches. His book shaped the West’s understanding of China for hundreds of years. John Man travelled in Marco’s footsteps to Xanadu, in search of the truth behind Marco’s stories; to separate legend from fact. Drawing on his own journey, archaeology and archival study, John Man paints a vivid picture of the man behind the myth and the true story of the great court of Kublai Khan.” (Global Books in Print)

The race to the New World : Christopher Columbus, John Cabot, and a lost history of discovery / Douglas Hunter.
“It’s hard to imagine that there is still uncharted territory in the history of the New World’s discovery. But Hunter indeed sails unsullied waters, offering an intriguing and surprising new twist on the old subject. Other historians have paralleled the voyages of Columbus and Cabot, Italian explorers for hire determined to find a westward route to Asia, but Hunter interweaves their stories and places them firmly into the complex geopolitical landscape of Renaissance Europe. Insisting that one cannot understand the career and motivations of one without understanding the career and motivations of the other, he analyzes the significant influence and impact these two rivals had upon one another. As this fascinating historical detective story unfolds, new pieces of an old puzzle are put into place, providing fresh perspective on the traditional discovery narrative. This important contribution to the scholarship of exploration history should also please readers who enjoy well-researched revisionist histories like Nathaniel Philbrick’s Mayflower (2006).” (Drawn from Booklist, courtesy of Syndetics)