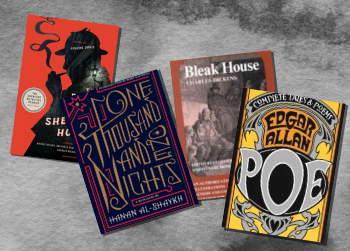 When and where did the detective novel first originate? Well, the answer to this question is unclear but the suspects may surprise you.

Several stories in the Old Testament have detective story elements; for example, the story of Susanna and the Elders, where a falsely-accused woman escapes death after her accusers reveal their lies, could be regarded as a detective tale . Certainly, the Greek classic Oedipus Rex is about the investigations around the murder of King Laius. Early Arabic fiction also has several detective stories and there are several examples in One Thousand and One Nights.

Thirteenth-century Chinese fiction had a whole genre of detective fiction with the Yan Dynasty story ‘Circle of Chalk’ being but one example. Interestingly most of the surviving examples use the inverted detective story format, where the murderer is revealed at the start.

The earliest examples in western literature include Voltaire’s Zadig , Edgar Allan Poe’s The Murders in the Rue Morgue and Louisa May Alcott’s V.V: Plots and Counterplots. Works by Wilkie Collins, such as The Woman in White and Dicken’s Bleak House have detective fiction elements. By the time Arthur Conan Doyle starts putting pen to paper, we are about to enter what is now described as the Golden Age of the detective novel – and by that time, the genre has already had a long and illustrious history.

Greek Tragedy / Euripides
“Agamemnon is the first part of the Aeschylus’s Orestian trilogy in which the leader of the Greek army returns from the Trojan war to be murdered by his treacherous wife Clytemnestra. In Sophocles’ Oedipus Rex the king sets out to uncover the cause of the plague that has struck his city, only to discover the devastating truth about his relationship with his mother and his father. Medea is the terrible story of a woman’s bloody revenge on her adulterous husband through the murder of her own children.” (Catalogue)

One thousand and one nights : a retelling / al-Shaykh, Hanan
“Lebanese author al-Shaykh here translates 19 of the stories told by young queen Shahrazad. Gathered and passed down over the centuries from India, Persia, and across the Arab world, the mesmerizing stories of “One Thousand and One Nights” tell of the real and the supernatural, love and marriage, power and punishment, wealth and poverty, and the endless trials and uncertainties of fate. They are related by the beautiful, wise, young Shahrazad, who gives herself up to murderous King Shahrayar.” (Adapted from Catalogue)

Candide and other stories / Voltaire
“Candide is the most famous of Voltaire’s ‘philosophical tales’, in which he combined witty improbabilities with the sanest of good sense. This edition includes four other prose tales – Micromegas, Zadig, The Ingênu, and The White Bull – and a verse tale based on Chaucer’s The Wife of Bath’s Tale, What Pleases the Ladies. The spirit of satire flourished during the Enlightenment, and its crowning achievement was Voltaire’s Candide. It follows the worldwide encounters – with shipwrecks, earthquakes, pestilence and human insanity – of its hero and his absurd tutor, Dr Pangloss.” (Catalogue)

The rivals of Sherlock Holmes : the greatest detective stories: 1837-1914
“If “Rue Morgue” was the first true detective story in English, the title of the first full-length detective novel is more hotly contested. Two books by Wilkie Collins–The Woman in White (1859) and The Moonstone (1868)–are often given that honor, with the latter showing many of the features that came to identify the genre: a locked-room murder in an English country house; bungling local detectives outmatched by a brilliant amateur detective; a large cast of suspects and a plethora of red herrings; and a final twist before the truth is revealed. Others point to Mary Elizabeth Braddon’s The Trail of the Serpent (1861) or Aurora Floyd (1862), and others still to The Notting Hill Mystery (1862-3) by the pseudonymous “Charles Felix.” (Adapted from Catalogue)

The complete Edgar Allan Poe tales. / Poe, Edgar Allan
“Including Ligeia —  The devil in the belfry —  The fall of the house of Usher  — The murders in the Rue morgue — A descent into the maelström — The island of the fay — The colloquy of Monos and Una — Never bet the Devil your head —  The masque of the red death — The pit and the pendulum — The tell-tale heart — The gold-bug — The black cat —  The premature burial — The oblong box — The Sphinx — The cask of Amontillado — “(Adapted from Catalogue)

The woman in white / Collins, Wilkie
“This mystery story first appeared in 1860 and tells of a plot to illegally obtain the inheritance of the heroine of the novel.  The Woman in White is one of the most eerily thrilling melodramas of the Victorian age. This gripping dramatization of Wilkie Collins’s gothic tale of love, greed and insanity opens in a London courtroom, where the main characters are testifying about the mysterious death of heiress Laura Fairlie. William Hope stars as drawing teacher Walter Hartwright, who aids a ghostly woman, dressed all in white, only to be struck by her strange resemblance to the beautiful Laura. ” (Adapted from Catalogue)

Bleak House / Dickens, Charles
“Bleak House opens in the twilight of foggy London, where fog grips the city most densely in the Court of Chancery. The obscure case of Jarndyce and Jarndyce, in which an inheritance is gradually devoured by legal costs, the romance of Esther Summerson and the secrets of her origin, the sleuthing of Detective Inspector Bucket and the fate of Jo the crossing-sweeper, these are some of the lives Dickens invokes to portray London society, rich and poor, as no other novelist has done.” (Adapted from Catalogue)

The moonstone / Collins, Wilkie
“The Moonstone – a brilliant but flawed diamond- was pried from the forehead of a Hindu idol by a British officer in India. He brought the stolen jewel back to England as a family heirloom, bequeathing it to his niece, but on the night of her 18th birthday, the Moonstone goes missing. The moonstone is a yellow diamond of unearthly beauty brought from India and given to Rachel Verrinder as an eighteenth birthday present, but the fabled diamond carries with it a terrible curse.” (Catalogue)

A study in scarlet / Doyle, Arthur Conan
“The very first Sherlock Holmes story, A Study in Scarlet was also the first of Conan Doyle’s books to be published. Convalescing in London after a disastrous experience of war in Afghanistan, Dr John Watson finds himself sharing rooms with his enigmatic new acquaintance, Sherlock Holmes. But their quiet bachelor life at 221B Baker Street is soon interrupted by the grisly discovery of a dead man in a grimy ‘ill-omened’ house in south-east London, his face contorted by an expression of horror and hatred such as Watson has never seen before. ” (Catalogue) 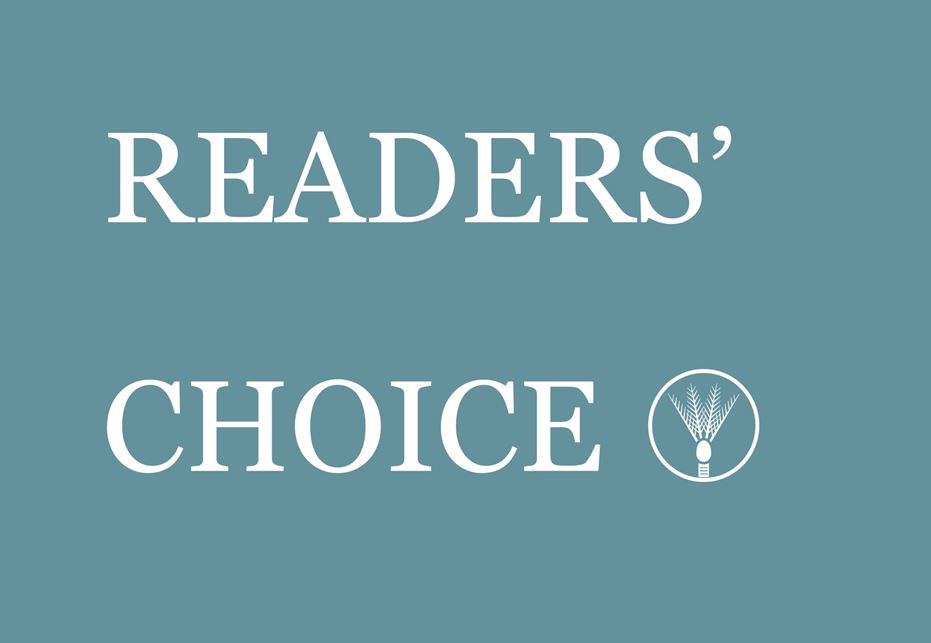 Have you ever loved a book so much that you want to stop and tell everyone how wonderful it is? Well now’s your chance!
The Readers’ Choice selections are books nominated by people who want to pass on their reading experience to the library community. Book lovers like you!

These selected books are highlighted with Reader’s Choice stickers so that other people can find great reading material. You can find slips for Reader’s Choice reviews in new books, or ask staff for one if you have a review or recommendation to embellish the library collection.

This month borrowers have loved a range of material from the latest unexpected plot twists in mystery writing to retellings of classic novels.  This eclectic selection reviews the breadth of the fiction collection with science fiction short stories and well researched historical fiction.

The inheritance and other stories / Megan Lindholm, Robin Hobb.
“The Inheritance & Other Stories is a marvelous new collection of short fiction from New York Times bestselling master storyteller Robin Hobb–including tales written under the pseudonym Megan Lindholm, by which the acclaimed fantasist first began her illustrious writing career. A unique compendium of wonders displaying the breathtaking skill, imagination, and remarkably varied styles of both alter egos.” (Syndetics summary)

Reader’s review: “I really enjoyed all the stories. I have read Robin Hobb books before and this was a great introduction to her other identity”

Tombland / C.J. Sansom.Tombland
“Spring, 1549. Edward VI, is eleven years old. His uncle Edward Seymour rules as Protector. The extirpation of the old religion by Protestants is stirring discontent among the populace while the prolonged war with Scotland is proving a failure. The economy is in collapse, inflation rages and rebellion is stirring.”  (Syndetics summary)

Reader’s review: “This book sets a new bar for historical fiction, with it’s meticulous research, and interweaving of a fictional character and story with the peasant rebellion led by Robert Kett in 1549. It’s the seventh novel in the author’s best selling Shardlake series but can be read as a one off novel… It was very refreshing to read a book on a little known period of English history, with such fantastic description of the period based on thorough research.”

Unequal affections : a Pride & Prejudice retelling / Lara S. Ormiston ; foreword by Devleena Ghosh, PhD.
“When Elizabeth Bennet first knew Mr. Darcy, she despised him and was sure he felt the same. Angered by his pride and reserve, influenced by the lies of the charming Mr. Wickham, she never troubled herself to believe he was anything other than the worst of men until, one day, he unexpectedly proposed. Diverging from Jane Austen’s classic novel Pride and Prejudice at the proposal in the Hunsford parsonage, this story explores the kind of man Darcy is, even before his “proper humbling,” and how such a man, so full of pride, so much in love, might have behaved had Elizabeth chosen to accept his original proposal.” (Syndetics summary)

Reader’s review: “A beautiful retelling of Jane Austen’s Pride and Prejudice. A must read for any P+P fan. Utterly un-put-downable! Enjoyed so much.”

The backstreets of purgatory / Helen Taylor.
“Finn Garvie’s life is one spectacular mess. He spends most of his time fannying around a makeshift Glasgow studio, failing to paint his degree portfolio, while his girlfriend Lizzi treats him like one of her psychology patients. Things take a turn for the strange when he finally encounters the person who’s been bugging him, and it seems to be none other than Caravaggio himself.
Art, truth and madness come to blows in this darkly funny debut novel from a startling new talent.” (Syndetics summary)

Reader’s review: “I thought this book was very hard to get into to start with but well written making the story blurry between present and the psychotic world”

Headlong / Cynthia Harrod-Eagles.
“Bill Slider and his team investigate the death of a prominent literary agent in this intriguing contemporary mystery. An embittered ex-wife. A discarded mistress. A frustrated would-be author. A disgruntled former employee. Many had reason to hold a grudge against the late lamented literary agent. But who would feel strongly enough to kill him?” (Syndetics summary)

Reader’s review: “Latest in the Detective Slider series. A good read for character development and cops out of work stories. Mystery is OK and well told but not new”

Charlesgate confidential / by Scott Von Doviak.
“A group of criminals in 1946 pull off the heist of the century, stealing a dozen priceless works of art from a Boston museum. But while the thieves get caught, the art is never found. Forty years later, the last surviving thief gets out of jail and goes hunting for the loot, involving some innocent college students in his dangerous plan.” (Syndetics summary)

Reader’s review: “Reasonably satisfactory story about reverberations of an art robbery over the decades that follow. Readable and it held me.”