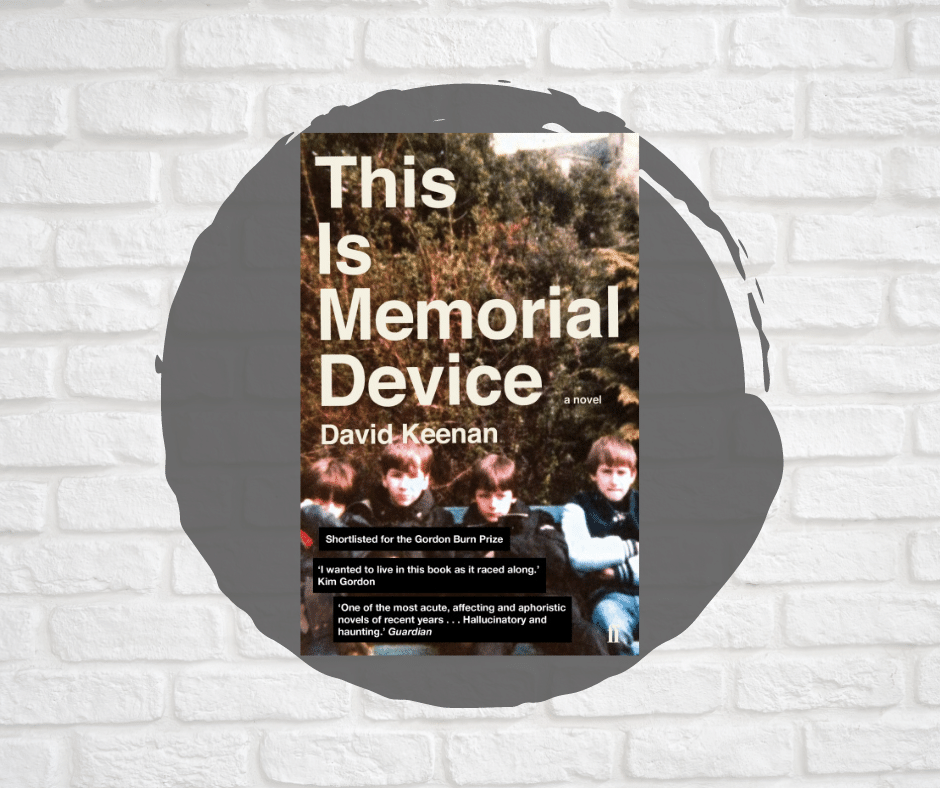 We think we’re walking into the future. We fool ourselves! But every last damn one of us is walking straight into the past.

We are very excited to welcome (in an electronic sense) multi-award-winning Scottish author David Keenan for a wide-ranging online interview, exclusive to Wellington City Libraries.

David is one of the most innovative, exciting and dynamic authors writing in English at the moment, with huge ambitions for his work way beyond the conventional parameters of fiction. His fiction output is truly extraordinary — vibrant, visceral, genre-breaking and immersive. It could easily be said he’s a pioneering visionary when it comes to what fiction is and can be — and his many past lives are just as interesting.

A self-confessed music evangelist, David was a long-time writer for the legendary and hugely influential Wire magazine. He also ran — along with his wife —  the now sadly closed Volcanic Tongue record emporium which also served as a distribution company and record label. Volcanic Tongue was so legendary in alternative music circles that the British Library recently harvested its entire online output of over two million words for posterity.

We wish to extend to David our deepest and most sincere thanks for sharing his time with us, and for such a fabulous interview — which you can now view below.

This is Memorial Device : an hallucinated oral history of the post-punk scene in Airdrie, Coatbridge and environs 1978-1986
“David Keenan’s debut novel is a love letter to the small towns of Lanarkshire in the west of Scotland in the late 1970s and early 80s as they were temporarily transformed by the endless possibilities that came out of the freefall from punk rock.” (Catalogue)

For the good times
“Sammy and his three friends live in the Ardoyne, an impoverished, predominantly Catholic area of North Belfast that has become the epicentre of a country intent on cannibalising itself. They love sharp clothes, a good drink, and the songs of Perry Como – whose commitment to clean living holds up a dissonant mirror to their own attempts to rise above their circumstances. They dream of a Free State, and their methods for achieving this are uncompromising, even as they fully indulge in the spoils of war. Keen to make a difference, the boys find themselves in the incongruous position of running a comic-book shop taken over by the IRA.” (Catalogue)

Below are just a few of the many books David mentions in the interview:

Cities of the red night / Burroughs, William S.
“While young men wage war against an evil empire of zealous mutants, the population of this modern inferno is afflicted with the epidemic of a radioactive virus. An opium-infused apocalyptic vision from the legendary author of Naked Lunch is the first of the trilogy with The Places of the Dead Roads and his final novel, The Western Plains.” (Adapted from Catalogue)

The man in the high castle / Dick, Philip K
“The United States has lost World War II and subsequently been divided between the Germans in the east and the Japanese in the west. In this world, we meet  Frank Frink, a dealer of counterfeit Americana, Nobusuke Tagomi, the Japanese trade minister in San Francisco, and Juliana Frink, Frank’s ex-wife, who may be more important than she realizes. These seemingly disparate characters gradually realize their connections to one another other just as they realize that something is not quite right about their world. ” (Catalogue) Also available as an eBook.

Kidnapped / Stevenson, Robert Louis
“On a stormy night off the coast of Scotland, young David Balfour faces his most terrifying test yet. He’s been double-crossed by his wicked uncle, tricked into a sea voyage, and sold into slavery. When the dashing Alan Breck Stewart comes aboard, he finds a brave friend at least, and the pair fight back against their treacherous, blackhearted shipmates. But then the ship hits a reef, it’s every man for himself, and David must battle against the raging sea itself” (Catalogue) Also available as an Audiobook.

Shakedown / Dicks, Terrance
“A classic novel starring the seventh Doctor and the Sontarans, back in print For thousands of years the Sontarans and the Rutans have fought a brutal war across the galaxy. Now the Sontarans have a secret plan to destroy the Rutan race — a secret plan the Doctor is racing against time to uncover. Only one Rutan spy knows the Sontarans’ plan. As he is chased through the galaxy in a desperate bid for his life, he reaches the planet Sentarion — where Professor Bernice Summerfield’s research into the history of the Sontaran-Rutan war is turning into an explosive reality.” (Adapted from Catalogue)

I, robot / Asimov, Isaac
” In these stories Isaac Asimov creates the Three Laws of Robotics and ushers in the Robot Age. Earth is ruled by master-machines but the Three Laws of Robotics have been designed to ensure humans maintain the upper hand: 1) A robot may not injure a human being or allow a human being to come to harm. 2) A robot must obey orders given to it by human beings except where such orders would conflict with the First Law. 3) A robot must protect its own existence as long as such protection does not conflict with the First or Second Law. But what happens when a rogue robot’s idea of what is good for society contravenes the Three Laws?” (Adapted from Catalogue) Also available as an eBook.

Desolation angels / Kerouac, Jack
“ Originally published in 1965, this autobiographical novel covers a key year in Jack Kerouac’s life–the period that led up to the publication of On the Road in September of 1957. After spending two months in the summer of 1956 as a fire lookout on Desolation Peak in the North Cascade Mountains of Washington, Kerouac’s fictional self Jack Duluoz comes down from the isolated mountains to the wild excitement of the bars, jazz clubs, and parties of San Francisco, before traveling on to Mexico City, New York, Tangiers, Paris, and London. Duluoz attempts to extricate himself from the world but fails, for one must “live, travel, adventure, bless, and don’t be sorry.” Desolation Angels is quintessential Kerouac.” (Catalogue)

Arthur Rimbaud : complete works / Rimbaud, Arthur
” The complete works of the French poet I1854-1891)  whose works  pre figured surrealism and whose influence on modern culture remains huge. Rimbaud produced the vast bulk of his works in adolescence famously quitting writing literature at age 20. A restless explorer who lived life to the full in all senses of the word both personally and physically. He is credited as being the precursor to modernist literature, who works remain vibrant and vital. ” ( Adapted from Catalogue).

The hero with a thousand faces / Campbell, Joseph
“In these pages, Campbell outlines the Hero’s Journey, a universal motif of adventure and transformation that runs through virtually all of the world’s mythic traditions. He also explores the Cosmogonic Cycle, the mythic pattern of world creation and destruction. As part of the Joseph Campbell Foundation’s Collected Works of Joseph Campbell, this third edition features expanded illustrations, a comprehensive bibliography, and more accessible sidebars. As relevant today as when it was first published — and continues to inspire all those interested in the inherent human need to tell stories.” (Adapted from Catalogue)