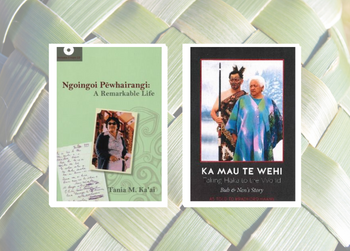 Haere mai and welcome to the second blog in our ‘Te Whare Tapere to Kapa Haka and Māori Concert Party’ series. You can find Part One here.

Urban migration was the driver for the formation of pan-tribal groupings such as Ngāti Poneke (1936), Te Rōpū Manutaki (1969), Anglican Māori Clubs formed under the leadership of Kingi Ihaka at Wellington and then Auckland,  and Te Kotahitanga o Waitaha was established early 1980s.

The Ngāti Poneke Concert Party in 1950:

Watch video of Ngāti Poneke performing at the NZ Polynesian Festival in 1981 in Avondale, Auckland:

Strong tribal groups were established in Tokomaru Bay, 1939. Tokomaru Bay waiata and the mahi of Tuini Ngawai are retold/performed by Ngā Taikura o te Hokowhitu a Tū in this video from Taikura Kapa Haka 2022 — watch online at the link below:

Tuini Ngawai founded Te Hokowhitu-a-Tū Concert Party in 1939 — a ropū which assisted Apirana Ngata to recruit soldiers for 28 Māori Battalion. Her most famous waiata was Arohaina mai e te Kingi Nui (1940) which became the unofficial hymn for the Māori Battalion:

Watch this programme from TVNZ’s Waka Huia archive (Oct 5 1997), about Māori composers Tuini Ngawai and Ngoi Pewhairangi — this is Part two of a two-part profile, and focuses on the establishment of Te Hokowhitu-a-Tu cultural party and the history of its activities throughout the years:

Ngoingoi Pēwhairangi : an extraordinary life / Ka’ai, Tania
“This bilingual text is a celebration of Ngoi’s life through the testimonies of many people who knew her.” (Catalogue)

And watch the Poi e music video over at Te Ara:

Dalvanius Prime worked the Australian club circuit in the 1970s as Dalvanius and the Fascinations, and formed a production company called Maui Records in New Zealand in 1983. From then he concentrated on Māori music. His best-known song, ‘Poi e’, was the result of a collaboration with East Cape writer Ngoi Pēwhairangi and was intended to make Māori children feel proud of their ethnicity. It was sung by the Pātea Maori Club to an infectious break-dance rhythm, successfully fusing traditional Māori culture with up-to-the-minute urban sounds. The song was in the New Zealand music charts for 22 weeks in 1984, including four weeks at number one. It re-entered the charts in 2010, popularised by the movie Boy.

Here is an interview with Dalvanius Prime on the making of Poi E (interview was recorded in 2003):

In 1952 Ngāpō (Bub) Wehi became a member of the Waihirere Cultural Group. Read:

Ngapo Wehi – the man who made kapa haka mainstream

Ka mau te Wehi = Taking haka to the world : Bub & Nen’s story / Wehi, Ngapo
With over a century of combined experience in Maori song and dance, leading teams and teaching, Ngapo and Pimia Wehi, affectionately known as Bub and Nen, are recognised as New Zealand’s foremost leaders in this ever-expanding arena, having won six national kapa haka championships, twice as the leaders of The Waihirere Maori Club (1965-1981) and four times with Auckland kapa haka team Te Waka Huia (1981-2011). [… This book] tells the story of Bub and Nen, a loving dedicated couple who taught a generation of Maori how to live the ideals of whanau (family) and hold fast to their cultural identity through participating in kapa haka, one of the biggest and most popular areas of Maori cultural growth to emerge in the last 30 years.” (Catalogue)