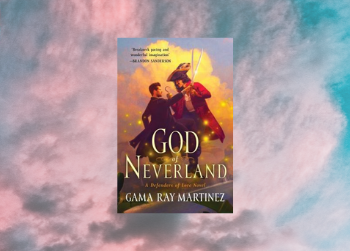 Down through the ages since its publication in 1904, first as a play and then in 1911 as a novel, the world of J.M. Barrie’s Peter Pan has long held a fascinating appeal to numerous authors of adult books. The work has become an iconic representation of youthful innocence and escapism, which has proved highly tempting to others for further exploration, as it provides a richly imagined world to explore. It also touches on numerous deep themes such as childhood, imagination and the passage from childhood to adulthood, amongst others. Books such as Lost Boy by Christina Henry or the highly recommended the Child Thief by Brom have expanded and added to Barrie’s world. The only officially authorised sequel, Peter Pan in Scarlet by Geraldine McCaughrean, was published in 2006.

In this month’s recently acquired science fiction and fantasy selection, we find a new title joining these illustrious ranks. God of Neverland by Gama Ray Martinez reimagines the world of Neverland, where a grown-up Michael Darling has to return to save from disaster, and find out what has happened to a mysteriously absent Peter.

Peter Pan the character first appears in an even earlier Barrie adult novel The Little White Bird, as a seven-day old baby half bird half boy. Barrie based the character on his own brother David, who died in a tragic accident when he was fourteen. There have been countless film and stage adaptations of the story, with theatre productions traditionally using young actresses to play Peter. With the name Pan being a nod to the Greek deity. In 1929 Barrie gifted the copyright and associated royalties of the work  To Great Ormond Street Children’s Hospital, as did Geraldine McCaughrean for her sequel.

God of Neverland / Martinez, Gama Ray
“In this magical re-imagining of J.M. Barrie’s classic tale, Michael Darling–the youngest of the Darling siblings and former Lost Boy, now all grown up–must return to the life he left behind to save Neverland from the brink of collapse and keep humanity safe from magical and mythological threats, as well as answer the ultimate question: Where is Peter Pan?” (Adapted from Catalogue)

Siren queen / Vo, Nghi
” Luli Wei is beautiful, talented, and desperate to be a star. Coming of age in pre-Code Hollywood, she knows how dangerous the movie business is and how limited the roles are for a Chinese American girl from Hungarian Hill-but she doesn’t care. She’d rather play a monster than a maid. But in Luli’s world, the worst monsters in Hollywood are not the ones on screen. The studios want to own everything from her face to her name to the women she loves, and they run on a system of bargains made in blood and ancient magic, powered by the endless sacrifice of unlucky starlets like her …” (Adapted from Catalogue)

The sea rises / Smith, A. J.
“Lord Marius Cyclone faces an unimaginable danger. The mighty legions of Santago Cyclone – known as the Bloodied Harp – and King Oliver Dawn Claw will be upon the Dark Harbour in less than a day, and truce seems impossible, even as the end of the world of Form creeps ever nearer. But the tide waits for no man. Marius has only one choice if his people are to survive: flight, into the Void. Meanwhile, a primal power awakens. The Sunken God has lived through many ages; watched countless civilisations rise and fall. And he will not let his quarry flee without a fight.”(Adapted from Catalogue)

One foot in the fade / Arnold, Luke
“An angel falls in a downtown street. His wings are feathered, whole–undeniably magical–the man clearly flew, because he left one hell of a mess when he plummeted into the sidewalk. But what sent him up? What brought him down? And will the answers help Fetch bring the magic back for good? Working alongside necromancers, genies, and shadowy secret societies, through the wildest forests and dingiest dive bars, this case will leave its mark on Fetch’s body, his soul, and the fate of the world.” (Adapted from Catalogue)

Spear / Griffith, Nicola
“The girl knows she has a destiny before she even knows her name. She grows up in the wild, in a cave with her mother, but visions of a faraway lake come to her on the spring breeze, and when she hears a traveler speak of Artos, king of Caer Leon, she knows that her future lies at his court. And so, brimming with magic and eager to test her strength, she breaks her covenant with her mother and, with a broken hunting spear and mended armour, rides on a bony gelding to Caer Leon. On her adventures she will meet great knights and steal the hearts of beautiful women. She will fight warriors and sorcerers. And she will find her love, and the lake, and her fate.” (Adapted from Catalogue)

Mercury Rising / Greene, R. W. W
“Brooklyn…just wants to keep his head down…But life gets real complicated when a killer with a baseball bat and a mysterious box of 8-track tapes sets him up for murder. So, his choices are limited–rot away in prison or sign up to defend the planet from the assholes who dropped a meteorite on Cleveland…Brooklyn is launched into a quest to save humanity…while simultaneously coping with high-stakes space battles, mystery science experiments, and the realisation that the true enemies perhaps aren’t the tentacled monsters on the recruitment poster–Or are they?”(Adapted from Catalogue)

The last beekeeper / Gulian, Jared
“Jim Parker, a honeybee expert, has retreated to a small island in Lake Michigan with his teenage daughter . In the midst of a Global Bee Crisis, bees everywhere are dying and the food supply teeters on the brink of collapse. But this island is not the haven Jim once thought. Someone is torching his traditional beehives, people are disappearing, and an unknown threat is lurking in the woods behind his house. When he finds something very peculiar in his remaining hives, he begins to unravel a mystery that is deeper, darker and more complex than he ever imagined. ” (Adapted from Catalogue) Also available as an Audiobook.

The devil’s dictionary / Kotler, Steven
” Hard to say when the human species fractured exactly. Harder to say when this new talent arrived. But Lion Zorn, protagonist of Last Tango, is the first of his kind-an empathy tracker, an emotional soothsayer, with a felt sense for the future of the we. In simpler terms, he can spot cultural shifts and trends before they happen. The Devil’s Dictionary finds Lion Zorn enmeshed with a strange subculture: polyamorous crypto-currency fiends with a tendency toward eco-terrorism. Called in to track down the origin of these exotics, Lion quickly finds himself entangled in a battle for the survival of our species .” (Adapted from Catalogue)

Did a work ever inspire offshoots, sequels, revisionings, reworkings, and movies as much as Pride and Prejudice? I think not, but feel free to correct me. If you’re a fan of Pride and Prejudice the collection of material below will either delight you or make your toes curl in horror (or both in turns).

This is a big thing. Seth Grahame-Smith shocked the world in 2009 with Pride and Prejudice and Zombies, creating a whole new genre of fiction (the Classic/Horror Mashup – complete with searching book club questions). Along with various other classics (Sense and Sensibility and Sea-Monsters, and most recently Romeo and Juliet and Vampires), there’s a growing family of Pride and Prejudice mashups:

You may have done this yourself at some time, briefly, in your head.

On the screen, big and small

Why? Why? Some literary criticism

An average film is about 2 hours long; the average novel is at least 50,000 words. Film adaptations of novels are plentiful, with some good, some bad, and some ugly, and nearly all having someone leaving the theatre suggesting “the book was better”. Is this because films struggle to do justice to so many words, and if so, is a shorter story therefore a better bet? Here are ten films, and the novellas and short stories they are based on, including some classics (both literary and celluloid).