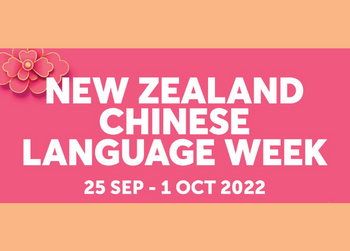 It’s Chinese Language Week from 25 September to 1 October, a time to celebrate Chinese culture and language, music, and much more.（这篇文章也有中文版）

Chinese Corner books for learning Chinese
Read books from the Chinese Corner to help you learn Chinese. You are welcome to reserve and borrow the books.

Chinese books
Reserving a book is free. You can pick up Chinese books in simple and traditional scripts from any of the Wellington City Libraries branches. Waitohi Johnsonville, Te Awe and Arapaki libraries also have Chinese books on display. Feel free to come to the libraries and immerse yourself in the beautiful Chinese decorations.

Live Music Performance – Waitohi library
Come to Johnsonville Waitohi library and prepare to be amazed by ancient zither music instruments and other Chinese music and cultural performances. Listen to ancient Chinese music played in the background while you enjoy the traditional treasures of the tea ceremony, poems and much more. No reservation required. Zheng, a Chinese zither, has 21 strings and originated from the Chunqiu dynasty. It is still played until today; its pentatonic melody is bright and it’s sound spreads afar.

Gu Qin is an ancient Chinese zither instrument and was highly recommended by Confucius.

Traditional Chinese Calligraphy Workshop
Two Chinese artists will demonstrate traditional artworks and techniques, and FREE craft bags and bookmarks of the artists’ work will be available (limited supply). Presented in partnership with China Cultural Centre in Wellington. As part of the experience, at 3:30pm our librarians will play some Chinese music from the Johnsonville Library terrace.

Chinese Chess
A Chinese Chess table will be available at Arapaki Library. English instructions are available so anyone can come along and play this ancient Chinese board game.

Overdrive eBooks
Read the special selection of Chinese Language Week books about Chinese and New Zealand culture on OverDrive, on your computer or your smartphone. Click here.

Mango languages is an online language system with tutorials for 77 languages and dialects.  It provides language learning in common contexts, such as greeting, food and transport. You can also learn Chinese Mandarin, Chinese Cantonese, and Chinese Shanghainese.

DragonSource Magazines
DragonSource has over 3000 Chinese magazines online that include many popular magazine titles, such as Reader’s Digest, Elle Chinese, Vogue Chinese, photography, Xinmin Weekly, cars, history and much more.

Updated monthly and at the time when the print cover is updated. Read online for free. Click here