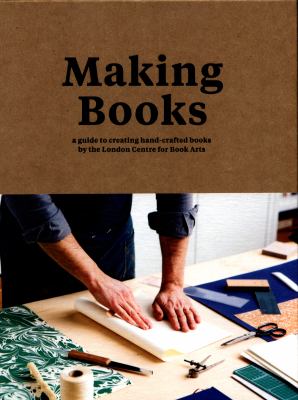 In this mass manufacturing world we live in today, handmade items are unique. They represent the passion, energy, knowledge and determination of the artist and usually, they have a story to tell as the art of craft is as old as our species! Enjoy the new books we have chosen for you.

Craeft : how traditional crafts are about more than just making / Alexander Langlands.
“In a period of meaningless mass manufacturing, our growing appetite for hand-made objects, artisan food, and craft beverages reveals our deep cravings for tradition and quality. But there was a time when craft meant something very different; the Old English word craeft possessed an almost indefinable sense of knowledge, wisdom, and power. In this fascinating book, historian and popular broadcaster Alex Langlands goes in search of the mysterious lost meaning of craeft. Through a vibrant series of mini-histories, told with his trademark energy and charm, Langlands resurrects the ancient craftspeople who fused exquisite skill with back-breaking labour – and passionately defends the renewed importance of craeft today.” (Syndetics summary) 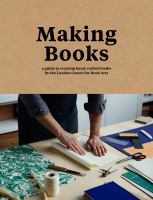 Making books : a guide for creating hand-crafted books / by the London Centre for Book Arts ; Simon Goode and Ira Yonemura.
“This is a modern, stylish and practical guide to the traditional craft of bookbinding, written by the founders of the London Centre for Book Arts, a destination workshop space that attracts visitors from all over the world. Accessible enough for complete beginners, while full of inspiration for those with more experience, this is the ultimate guide to making beautiful books by hand. Starting with an introduction to the bindery and a useful inventory of necessary tools and equipment, you’ll also learn about different paper types, and special finishes such as cloth coverings, headbands and ribbon markers.” (Syndetics summary) 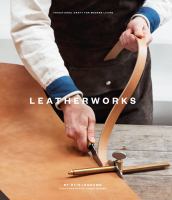 Leatherworks : traditional craft for modern living / by Otis Ingrams ; photography by Simon Brown.
“Learn to make stylish and beautiful items from leather, from homeware to fashion accessories, in your own living room. From a woven bench or log basket, to bags, a sunglasses case or even an apron, this cool craft book teaches you how to make 20 simple yet stylish leather projects. This book is the perfect introduction to working with leather.” (Syndetics summary) 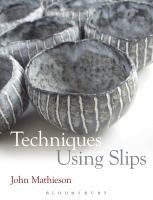 Techniques using slips / John Mathieson.
“A form of liquid clay, has been used since ancient times to add color and texture to ceramics. This method of clay decoration, practiced from Rome to Mesoamerica, continues to develop internationally. Slips allow ceramicists to give their works rich, intriguing surfaces in a range of hues. In Techniques Using Slips, expert potter John Mathieson explains how to formulate and apply slips successfully to embellish earthenware, stoneware, and porcelain. Techniques Using Slips is a must for any potter’s library. Ceramic artists and educators will turn to this handbook again and again for direction and insight.” (Syndetics summary) 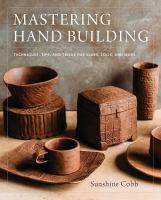 Mastering hand building : techniques, tips, and tricks for slabs, coils, and more / Sunshine Cobb ; foreword by Andrea Gill.
“From pinch pots to coiled boxes to soft slab tableware, mastering hand building is a lifelong pursuit. In this book, Sunshine Cobb covers all the foundational skills, with lessons for constructing both simple and complex forms from clay. Ceramic artists will also find a variety of next-level techniques and tips: designing templates and replicating pieces, lidded vessels, using molds, a variety of decorative techniques, and other avenues of exploration are all inside.” (Syndetics summary) 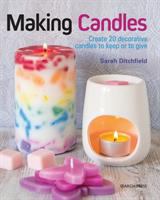 Making candles : create 20 decorative candles to keep or to give / Sarah Ditchfield.
“Candles are a much-loved feature in the home, and make thoughtful, handcrafted gifts for friends and family. Sarah Ditchfield shows you how to make beautiful, unique candles for all occasions, using traditional and modern materials and techniques.” (Syndetics summary) 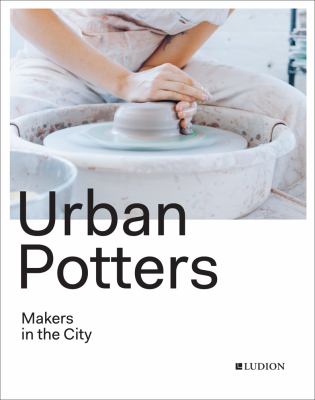 The interest and demand for bright colour and bold pattern ceramics have made them popular again and this selection of books with recent works and some clay and glaze recipes reflects on their appreciation. 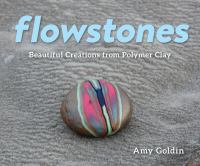 Flowstones : beautiful creations from polymer clay / Amy Goldin.
“Conceived of by artist Amy Goldin, “flowstones” are crafted by molding a sheet of polymer clay around a smooth river rock. They impart a sense of calm to the holder, grounded by the weight and soothed by the smooth surface. Each stone’s unique shape and pattern gives it a beauty all its own. In Flowstones, Goldin shares beautiful photographs of the many stones she has created, captured in nature, where their striking appearance contrasts with landscapes of smooth river rocks, grassy parks, and sandy beaches.” (Syndetics summary) 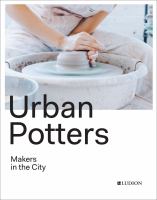 Urban potters : makers in the city / Katie Treggiden ; edited by Micha Pycke & Ruth Ruyffelaere.
“Clay is back: the age-old craft of ceramics is being embraced by a new generation of urban makers and collectors–and by interior designers. Here, Katie Treggiden explores the contemporary revival of pottery, focusing on six inspiring cities and their makers. Twenty-five young and passionate ceramicists in New York, London, Tokyo, Copenhagen, Sydney, and Sao Paulo introduce us to their work, their studios, and their inspiration.” (Syndetics summary) 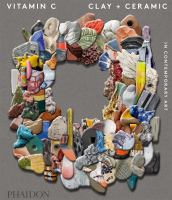 Vitamin C : clay + ceramic in contemporary art / Louisa Elderton and Rebecca Morrill, editors.
“Vitamin C celebrates the revival of clay as a material for contemporary visual artists, featuring a wide range of global talent as selected by the world’s leading curators, critics, and art professionals. Clay and ceramics have in recent years been elevated from craft to high art material, with the resulting artworks being coveted by collectors and exhibited in museums around the world. Packed with illustrations, Vitamin C is a vibrant and incredibly timely survey – the first of its kind.” (Syndetics summary) 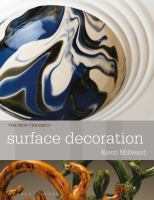 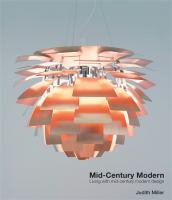 Mid-century modern : living with mid-century modern design / Judith Miller.
“From the ‘soft modernism’ of Scandinavian furniture, to the sleek clean lines of the lighting created by the Castiglione brothers in Italy, all the iconic designs and designers of the period are featured in this guide to one of the most exciting periods of design history. The careers and influence of groundbreaking designers, including Charles and Ray Eames, Alvar Aalto, Robin and Lucienne Day, Georg Jensen, Anne Jacobsen and many others, are described in stand-alone feature pages. This invaluable book explores the most desirable furniture, ceramics, glass, metalware, interiors, and textiles from the late 1930s through to the early 1960s.” (Adapted from Syndetics summary)

Animals, plants, politics and poetry feature this month in the New Zealand collection.

New Zealand inventory of biodiversity / edited by Dennis P. Gordon.
“Appropriate for advanced high school and college students as well as working scientists, this intriguing guide is the first of three volumes that will chart the progress of a scientific inventory of New Zealand’s living and fossilized biodiversity. An international effort involving more than 220 New Zealand specialists, this project, when completed, will include every one of the almost 55,000 known species of animals, plants, fungi, and micro-organisms in the country. Part of Species 2000, an international scientific project, the long-term goal is to enumerate all known species on earth into one seamless list called the Catalog of Life, which will function as an online biological catalog. To date, only New Zealand has compiled a checklist of its entire biota.” (Syndetics summary) 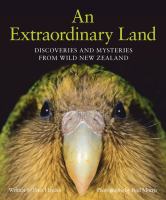 An extraordinary land : discoveries and mysteries from wild New Zealand / written by Peter Hayden ; photographs by Rod Morris.
“Our isolation has been a huge advantage. It turned New Zealand into a wild laboratory where evolution could conduct experiments that lead to weird and wonderful outcomes like the kakpo and the giant weta. It was also a museum, where ancient creatures could exist long after their kind disappeared from the rest of the world. More recently, scientists are discovering how little we know about species we thought we knew so well. An Extraordinary Land brings us up to date with these discoveries and gives us a snapshot of what makes New Zealand wildlife unique”–Jacket flap. 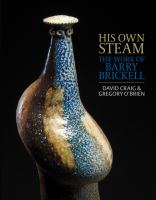 His own steam : the work of Barry Brickell / with essays by David Craig & Gregory O’Brien and new photography by Haruhiko Sameshima.
“Potter extraordinaire, conservationist, railway enthusiast and iconoclast Barry Brickell is one of New Zealand’s most important ceramicists … In essays by David Craig and Gregory O’Brien and with both newly commissioned photographs by Haru Sameshima and historic images, His Own Steam: The Work of Barry Brickell charts Brickell’s career in its entirety and in the context of his life and times, timed to coincide with a survey exhibition of the same name at The Dowse Art Museum”–Publisher information.

Sewing freedom : Philip Josephs, transnationalism & early New Zealand anarchism / Jared Davidson ; [foreword by Barry Bateman ; illustrations by Alec Icky Dunn].
“Davidson has produced much more than a soundly researched and very engaging biography… this is an excellent, wide-ranging contribution to our knowledge of the international (and indeed transnational) anarchist movement, and sweeps us along in a fascinating story that takes us from the pogroms in Russian Latvia, to the working-class slums of Victorian Glasgow, to the early struggles of the nascent labour movement in New Zealand.”–Dr David Berry, author of “A History of the French Anarchist Movement” (Syndetics Summary)

Paradise past : the transformation of the South Pacific, 1520-1920 / Robert W. Kirk.
“In the 400 years from Magellan’s entrance into Pacific waters to 1920, the lives of the people of the South Pacific were utterly transformed. Exotic diseases from Europe and America, particularly the worldwide influenza pandemic, were deadly for islanders. Ardent missionaries changed the belief systems and lives of nearly all Polynesians, Aborigines, and those Papuans and Melanesians living in areas accessible to westerners. By 1920 every island and atoll in the South Seas had been claimed as a colony or protectorate of a power such as Britain, France or the United States. Factors aiding this imperial sweep included European outposts such as Sydney, advances in maritime technology, the work of missionaries, a desire to profit from the area’s relatively sparse resources, and international rivalry that led to the scramble for colonies. The coming of westerners, as this book points out, was not entirely negative, as head-hunting, cannibalism, chronic warfare, human sacrifice, and other practices were diminished–but whole cultures were irreversibly changed or even eradicated.” (Syndetics Summary)

The Judas tree : poems / by Lorna Staveley Anker ; edited by Bernadette Hall.
” Lorna Staveley Anker was born in 1914. She used to joke that this was the cause of the First World War. In truth, the fine poems in this collection reveal her as New Zealand’s first women war poet. This collection contains the best of her published poems and a substantial number never seen before.” (Adapted from back cover)

Apollo in George Street : the life of David McKee Wright / Michael Sharkey.
“David McKee Wright was the most prolific poet in Australia around the First World War, and the influential literary editor of the Sydney Bulletin. This biography brings to life aspects of the literary culture of New Zealand in the years before its independence, and of Australia in the early years of Federation.” (Syndetics Summary)