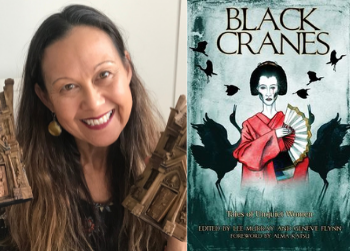 Lee has also recently been nominated in the Shirley Jackson Awards for Black Cranes,  shortlisted for the Ladies of Horror Fiction Awards in the Short Fiction Category for ‘Heart Music’ from Grotesque: Monster Stories, is a nominee in Horror Fiction in the Skoutz Awards for Beutezeit, the German translation of Into the Mist and is also currently nominated in four categories of New Zealand’s Sir Julius Vogel Awards (Novel, Short Fiction, Collection, and Services to Science Fiction and Horror).

So, with all these awards and accolades pouring in we approached Lee about the possibility of doing an online interview. Which she very kindly agreed to. So, for your delight and edification we have an exclusive in-depth interview and reading with Lee where she talks in detail about her work, inspirations, background, and a whole host of other topics. For anyone interested in Lee’s work or, indeed, speculative fiction or horror in general, the interview is unmissable. Both the interview and a special reading from Black Cranes: tales of unquiet women are available to watch below.

We wish to expend our heartfelt thanks to Lee and her film crew Dhaivat Mehta and Harry Oram.

Browse Lee’s work in our catalogue:

Black cranes : tales of unquiet women
“Almond-eyed celestial, the filial daughter, the perfect wife. Quiet, submissive, demure. In Black Cranes, Southeast Asian writers of horror both embrace and reject these traditional roles in a unique collection of stories which dissect their experiences of ‘otherness,’ be it in the colour of their skin, the angle of their cheekbones, the things they dare to write, or the places they have made for themselves in the world. Black Cranes is a dark and intimate exploration of what it is to be a perpetual outsider.” (Catalogue)

Into the ashes / Murray, Lee
“The nation’s leaders scoff at the danger. That is; until the ground opens and all hell breaks loose. The armed forces are hastily deployed; NZDF Sergeant Taine McKenna and his section tasked with evacuating civilians and tourists from Tongariro National Park. It is too little, too late. With earthquakes coming thick and fast and the mountains spewing rock and ash, McKenna and his men are cut off. Their only hope of rescuing the stranded civilians is to find another route out, but a busload of prison evacuees has other ideas. And, deep beneath the earth’s crust, other forces are stirring, ” (Adapted from Catalogue)