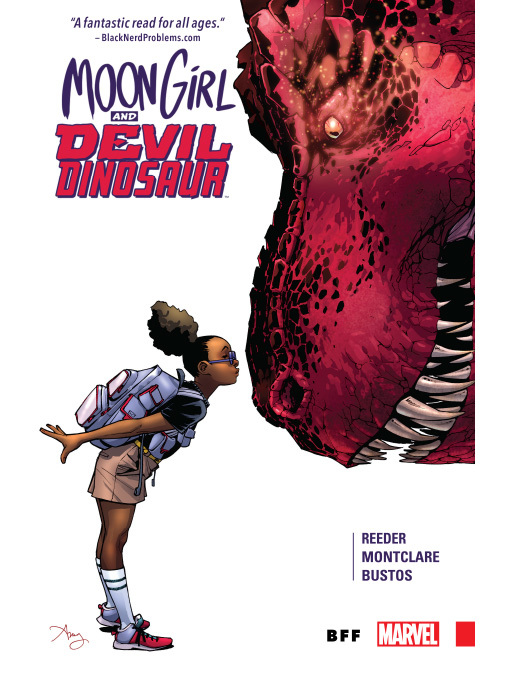 Afrofuturism, the cultural movement that imagines science-fiction tropes through the lens of African and African-American perspectives, came bursting into the mainstream with the release of Black Panther. Now you can experience the world of Wakanda (and beyond) in these graphic novels, brought to four-colour life by some of the best artists the medium has to offer!

Black Panther [6] : the intergalactic empire of Wakanda. Part one, Many thousands gone / Coates, Ta-Nehisi
“A bold new direction for the Black Panther! For years, T’Challa has kept foreign invaders out of his homeland, protecting his people from everything from meddling governments to long-lost gods. Now, he will discover that Wakanda is much bigger than he ever dreamed…across the vast Multiverse lies an empire founded in T’Challa’s name. Jump on now and learn the truth behind the Intergalactic Empire of Wakanda. Ta-Nehisi Coates welcomes aboard fan-favorite artist Daniel Acuna for a Black Panther story unlike any other.” (Catalogue)

Black Panther : world of Wakanda / Gay, Roxane
“The world building of Wakanda continues in a love story where tenderness is matched only by brutality. You know them now as the Midnight Angels, but in this story they are just Ayo and Aneka, young women recruited to become Dora Milaje, an elite task force trained to protect the crown of Wakanda at all costs. Their first assignment will be to protect Queen Shuri… but what happens when your nation needs your hearts and minds, but you already gave them to each other? Meanwhile, former king T’Challa lies with bedfellows so dark, disgrace is inevitable. Plus, explore the true origins of the People’s mysterious leader, Zenzi. Black Panther thinks he knows who Zenzi is and how she got her powers – but he only knows part of the story!” (Catalogue)

Shuri [1] : the search for Black Panther, 1 / Okorafor, Nnedi
“The world fell in love with her in the movie. Now, the Black Panther’s techno-genius sister launches her own adventures – written by best-selling Afrofuturist author Nnedi Okorafor and drawn by Eisner-nominated artist Leonardo Romero The Black Panther has disappeared, lost on a mission in space. And in his absence, everyone’s looking at the next in line for the throne. But Shuri is happiest in a lab, surrounded by gadgets of her own creation. She’d rather be testing gauntlets than throwing them. But a nation without a leader is a vulnerable one – and Shuri may have to choose between Wakanda’s welfare and her own.” (Catalogue)

Rise of the Black Panther / Narcisse, Evan
“Wakanda has always kept itself isolated from Western society, but that’s about to change. Young T’Challa knows he’s destined to become king, but when his father is murdered by outsiders, he finds himself taking up a mantle he may not be ready for. Experience the troubled reign of King T’Chaka! Discover the mother T’Challa never knew! And see how the world first learns of the wondrous nation of Wakanda – including Namor, King of Atlantis ; the Winter Soldier ; and the ruler of Latveria, Doctor Doom! Plus: as Erik Killmonger makes a devastating move, a missing chapter of T’Challa and Storm’s lifelong romance comes to light – and the Black Panther must decide his unique role in a world full of super heroes!” (Catalogue)

Moon Girl and Devil Dinosaur [1] : BFF / Montclare, Brandon
(Overdrive)
“Lunella Lafayette is an inhuman preteen genius who wants to change the world! That job would be a lot easier if she wasn’t living in mortal fear of her latent inhuman gene. There’s no telling what she’ll turn into — but Luna’s got a plan. All she needs is an Omni-Wave Projector. Easy, right? That is, until a red-scaled beast is teleported from the prehistoric past to a far-flung future we call…today! Together they’re the most Marvelous Team-Up of all — the Inhuman Moon Girl and time-tossed Devil Dinosaur!” (Adapted from Catalogue)

Deathlok : the souls of cyber-folk / McDuffie, Dwayne
“As if being duped by his evil ex-employers into becoming the cyborg soldier Deathlok isn’t enough, now Michael Collins is square in the sights of a mad villain collecting and disassembling cyborgs and androids. Can you guess the secret of Mechadoom? Hopefully Deathlok, with a little help from the Fantastic Four and the X-Men, can. Then, what happens when the man in the body of a killing machine meets the killing machine in the body of a man? Find out when Deathlok and the Punisher team up! And the nightmare is far from over for Collins – when he finds himself in battle with Ghost Rider, it’s time to fight hellfire with firepower” (Catalogue)

Black Lightning : cold dead hands / Isabella, Tony
“Iconic 70s comic character and now star of his own hit TV series on the CW, Black Lightning, comes thundering back into his hometown to right past wrongs and start a whole new crime-fighting era.  Black Lightning is back and things are not the same. In his home town of Cleveland, high school teacher Jefferson Pierce is a role model for his students. As Black Lightning, he’s fighting to keep them safe, even as his city’s streets are invaded by local gangs with deadly super-weapons. And wait until you see who their supplier is! Jefferson Pierce is reborn for a new era, as the titular character of the new CW series takes center stage in this new graphic novel.” (Catalogue)

Kindred : a graphic novel adaptation / Duffy, Damian
“Home is a new house with a loving husband in 1970s California that is suddenly transformed into the frightening world of the antebellum South. Dana, a young black writer, can’t explain how she is transported across time and space to a plantation in Maryland. But she does quickly understand why: to deal with the troubles of Rufus, a conflicted white slaveholder – and her progenitor. Her survival, her very existence, depends on it. This searing graphic-novel adaptation of Octavia E. Butler’s science fiction classic is a powerfully moving, unflinching look at the violent, disturbing effects of slavery on the people it chained together, both black and white – and made kindred in the deepest sense of the word.” (Catalogue)