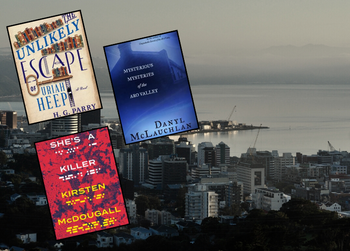 There’s nothing quite like the feeling of reading a novel and recognising the locations and events in the pages, because they’re set in your home town.  We’re lucky in Wellington, we have a plethora of novels set right here in the windy little capital.  Here are a selection to get you started.

The wives of Henry Oades : a novel / Moran, Johanna
“In 1890, Henry Oades decided to undertake the arduous sea voyage from England to New Zealand in order to further his family’s fortunes. Here they settled on the lush but wild coast – although it wasn’t long before disaster struck in the most unexpected of ways.” (Catalogue)

The nature of Ash / Hager, Mandy
“Ash McCarthy thought he finally had it made: away from home and all its claustrophobic responsibilities, he’s revelling in the freedom of student hostel life. But life is about to take a devastating turn, when two police officers knock on his door. Their life-changing news forces him to return home to his Down Syndrome brother Mikey, and impels him into a shady world of political intrigue, corruption, terrorism and lies . . . so many lies.” (Adapted from Catalogue)

Auē / Manawatu, Becky
“Taukiri was born into sorrow. Auē can be heard in the sound of the sea he loves and hates, and in the music he draws out of the guitar that was his father’s. It spills out of the gang violence that killed his father and sent his mother into hiding, and the shame he feels about abandoning his eight-year-old brother to another violent home. But Arama is braver than he looks, and he has a friend and his friend has a dog, and the three of them together might just be strong enough to turn back the tide of sorrow.” (Adapted from Catalogue)

She’s a killer / McDougall, Kirsten
“The world’s climate is in crisis and New Zealand is being divided and reshaped by privileged immigrant wealthugees. Thirty-something Alice has a near-genius IQ and lives at home with her mother with whom she communicates by Morse code. When Alice meets a wealthugee named Pablo, she thinks she’s found a way out of her dull existence. But then she meets Pablo’s teenage daughter, Erika – an actual genius full of terrifying ambition.” (Adapted from Catalogue)

Mysterious mysteries of the Aro Valley / McLauchlan, Danyl
“A returning hero. A desolate valley. A missing mathematician. A glamorous council bureaucrat with a hidden past. A cryptic map leading to an impossible labyrinth. An ancient conspiracy; an ancient evil. A housing development without proper planning permission. All leading to the most mysterious mystery of all. Mysterious Mysteries of the Aro Valley is a dark and forbidding comic farce.” (Catalogue)

The unlikely escape of Uriah Heep / Parry, H. G.
“For his entire life, Charley Sutherland has concealed a magical ability he can’t quite control: he can bring characters from books into the real world. But then, literary characters start causing trouble in their city, making threats about destroying the world… and for once, it isn’t Charley’s doing. There’s someone else who shares his powers. It’s up to Charley and a reluctant Rob to stop them, before these characters tear apart the fabric of reality.” (Adapted from Catalogue)

One night out stealing / Duff, Alan
“Boys’ homes, borstal, jail, stealing, then jail again – and again. That’s been life for Jube and Sonny. One Pakeha, the other Maori, only vaguely aware of life beyond pubs and their hopeless cronies . . . Reviewers found it compulsive and unforgettable, one saying: ‘Brutal, foul-mouthed, violent, despairing and real . . . it can’t be ignored’. In this novel Alan Duff confirms his skills as a gripping story-teller and a masterful creator of characters and situations.” (Adapted from Catalogue)

A mistake / Shuker, R. Carl
“Elizabeth Taylor is a surgeon at a city hospital, a gifted, driven and rare woman excelling in a male-dominated culture. One day, while operating on a young woman in a critical condition, something goes gravely wrong” (Catalogue)

Sodden downstream / Gnanalingam, Brannavan
“Thousands flee central Wellington as a far too common ‘once in a century’ storm descends. For their own safety, city workers are told that they must go home early. Sita is a Tamil Sri Lankan refugee living in the Hutt Valley. She’s just had a call from her boss – if she doesn’t get to her cleaning job in the city she’ll lose her contract.” (Catalogue)

Victory Park / Kerr, Rachel
“Kara lives in Victory Park council flats with her young son, just making a living by minding other people’s kids – her nightly smoke on the fire escape the only time she can drop her guard and imagine something better. But the truth is life is threadbare and unpromising until the mysterious Bridget moves in to the flats. The wife of a disgraced Ponzi schemer she brings with her glamour and wild dreams and an unexpected friendship. Drawn in, Kara forgets for a moment who she’s there to protect.” (Catalogue)

Miramar morning / Edwards, Denis
“In 1947 a young woman is found murdered on the slopes of Wellington’s Mt Victoria. The events that follow create a frightening undertow of corruption, menace, lies and violence. In 1972 a woman in Sydney is blown to pieces by a letter bomb. A few days later her sister in Auckland receives a suspicious parcel at work. What is the link between the two crimes?” (Adapted from Catalogue)