This booklist explores the science behind the fictional inventions, mythical animals, unusual science jobs, science shows and much more. This blog is suited for scientists and people who would like to read something interesting.

The science of superheroes : the secrets behind speed, strength, flight, evolution, and more / Brake, Mark
“Discover the science behind the abilities of your favourite superheroes!  Superheroes fascinate their fans with their incredible superhuman abilities and impressive technology. But are they plausible or real examined through the scientific lens? For example, Can an Iron Man suit be made? How does Thor’s hammer work? Could any known forms of radiation cause superpowers? How many calories does Superman need each day? ” (Adapted from the Catalogue)

Every tool’s a hammer : life is what you make it / Savage, Adam
“Adam Savage, star of Discovery Channel’s MythBusters shares his golden rules of creativity, through forty-plus years of making, molding, building and breaking, this book hope to save you a few mistakes (and fingers) and help you turn your curiosities into creations. This toolbox also includes lessons from many other incredible makers and creators, including: Jamie Hyneman, Nick Offerman, Pixar director Andrew Stanton, Oscar-winner Guillermo del Toro, artist Tom Sachs, and chef Traci Des Jardins. ” (Adapted from the Catalogue)

Worlds in shadow : submerged lands in science, memory and myth / Nunn, Patrick D.
“What’s beneath the ocean surface is a fertile ground for speculation, even myth-making, but also a topic on which geologists and climatologists have increasingly focused on in recent decades. This is the first book to present the science of submergence in a popular format. Patrick Nunn sifts the fact from the fiction, using the most up-to-date research to work out which submerged places may have actually existed versus those only exist in myth.” (Adapted from the Catalogue) 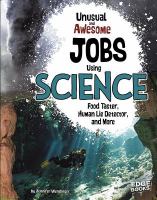 Unusual and awesome jobs using science : food taster, human lie detector, and more / Wendinger, Jennifer
“Discover fascinating facts, figures, and pictures while learning about the most interesting and extreme jobs that use science. Find out what kind of training it takes to be a food taster, how much money a human lie detector makes, and exactly what in the world a professional beard grower does!” (Catalogue)