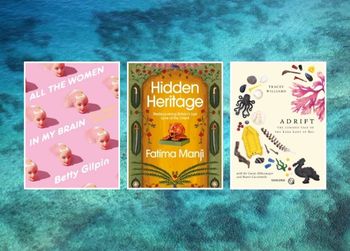 Many of the books below involve ideas of heritage: what we inherit from our families, from the cultures we grow up within, and from the complex histories of our world as a whole. In Motherlands, Amaryllis Gacioppo goes searching for a homeland she only knows through stories, while in Hidden Heritage Fatima Manji uses six forgotten relics as a guide to a lesser-told history of the British Empire. Looking into the future, beach-comber Tracey Williams considers the inheritance we are leaving for our descendants in Adrift, as she finds pieces of sea-themed Lego amongst other modern detritus – a ship full of the plastic toys sunk in the 1990s and pieces are still washing up to this day.

If those don’t sound like your cup of tea, why not check out Don’t Let It Get You Down or All the Women in My Brain, two excellent collections of essays focusing in on identity. Or perhaps you’d like to take a literary tour without having to leave your chair? In that case, Around the World in 80 Books is the one for you.

Motherlands / Gacioppo, Amaryllis
“Australian writer Amaryllis Gacioppo has been raised on stories of original homes, on the Palermo of her mother, the Benghazi of her grandmother and the Turin of her great-grandmother. But what does belonging mean when you’re not sure of where home is? Is the modern nation state defined by those who flourish there or by those who aren’t welcome? Is visiting the land of one’s ancestors a return, a chance to feel complete, or a fantasy? Weaving memoir and cultural history through modern political history, examining notions of citizenship, statelessness, memory and identity and the very notion of home, Motherlands heralds the arrival of a major talent that opens one’s eyes to new ways of seeing.” (Adapted from Catalogue)

Adrift : the curious tale of the Lego lost at sea / Williams, Tracey
“In 1997 sixty-two containers fell off the cargo ship Tokio Express after it was hit by a rogue wave off the coast of Cornwall, including one container filled with nearly five million pieces of Lego, much of it sea themed. The pieces are still washing up today. Writer and beachcomber Tracey Williams has always been intrigued by chance finds and the stories and folklore behind them, from shells and sea glass discovered on childhood holidays in Cornwall to flints and fossils unearthed in fields. In 1997, she became interested in the changing nature of beach combing and began to research the age and origin of many of the man-made items she discovered. Her plastic finds have since been described as “a colourful catalogue of our times.” (Adapted from Catalogue)

Don’t let it get you down : essays on race, gender, and the body / Nolan, Savala
“An incisive and vulnerable yet powerful and provocative collection of essays, Savala offers poignant reflections on living between society’s most charged, politicized, and intractably polar spaces: between black and white, between rich and poor, between thin and fat – as a woman. It is these liminal spaces that give the essays their strikingly clear and refreshing point of view on the defining tension points in our culture. Each of the twelve essays are rife with unforgettable and insightful anecdotes, and are as humorous and as full of Savala’s appetites as they are of anxieties. Perfect for fans of Heavy by Kiese Laymon and Bad Feminist by Roxane Gay, this book delivers a fresh perspective on race, class, bodies, and gender, that is both an entertaining and engaging addition to the ongoing social and cultural conversation.” (Adapted from Catalogue)

Hidden heritage : rediscovering Britain’s lost love for the Orient / Manji, Fatima
“Why was there a Turkish mosque adorning Britain’s most famous botanic garden in in the eighteenth century? And more importantly, why is it no longer there? Throughout Britain’s galleries and museums, civic buildings and stately homes, relics can be found that beg these questions and more. They point to a more complex national history than is commonly remembered. These objects, lost, concealed or simply overlooked, expose the diversity of pre-twentieth-century Britain and the misconceptions around modern immigration narratives. In her journey across the country exploring cultural landmarks, Fatima Manji searches for a richer and more honest story of a nation struggling with identity and the legacy of empire.” (Adapted from Catalogue)

Around the world in 80 books / Damrosch, David
“David Damrosch set out to counter a pandemic’s restrictions on travel by exploring eighty exceptional books from around the globe. Following a literary itinerary from London to Venice, Tehran and points beyond, he explores how these works have shaped our idea of the world, and the ways in which the world bleeds into literature. In his literary cartography, Damrosch includes compelling contemporary works as well as perennial classics, hard-bitten crime fiction as well as haunting works of fantasy, and the formative tales that introduce us as children to the world we’re entering. Taken together, these eighty titles offer us fresh perspective on enduring problems. Around the World in 80 Books is a global invitation to look beyond ourselves and our surroundings, and to see our world and its literature in new ways.” (Adapted from Catalogue)

All the women in my brain : and other concerns / Gilpin, Betty
“Betty Gilpin has a brain full of women. There’s Blanche VonFuckery, Ingrid St. Rash, and a host of others–some cowering in sweatpants, some howling plans for revolution, and some, oh God, and some…slowly vomiting up a crow without breaking eye contact? Jesus. These women take turns at the wheel. That’s why Betty feels like a million selves. With a raised eyebrow and a soul-scalpel, she tells us how she got this way. She takes us from wild dissections of modern womanhood to boarding school to the glossy cringe of Hollywood. We laugh through the failures and quietly hope with her for the dreams. Stunning, candid, and laugh-out-loud funny, All the Women in My Brain is perfect for any reader who’s ever felt like they were more, or at least weirder, than the world expected.” (Adapted from Catalogue)

Beyond measure : the hidden history of measurement / Vincent, James
“We measure rainfall and radiation, the depths of space and the emptiness of atoms, calories and steps, happiness and pain. But how did measurement become ubiquitous in modern life? When did humanity first take up scales and rulers, and why does this practice hold authority over so many aspects of our lives? Written with dazzling intelligence, James Vincent provides a fresh and original perspective on human history as he tracks our long search for dependable truths in a chaotic universe. Full of mavericks and visionaries, adventure and the unexpected, Beyond Measure shows that measurement has not only made the world we live in, it has made us too.” (Adapted from Amazon UK)

Pirate queens : the lives of Anne Bonny and Mary Read / Simon, Rebecca
“Between August and October 1720, two female pirates named Anne Bonny and Mary Read terrorized the Caribbean in and around Jamaica. Despite their short career, they became two of the most notorious pirates during the height of the eighteenth-century Golden Age of Piracy. In a world dominated by men, they became infamous for their bravery, cruelty and unwavering determination to escape the social constraints placed on women during that time. But how much is fact versus fiction? This first full-length biography about Anne Bonny and Mary Read explores their intriguing backgrounds while examining the social context of women in their lifetime and their legacy in popular culture that exists to the present day.” (Adapted from Amazon UK)