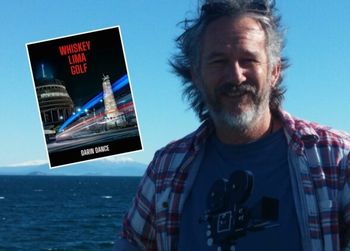 Whiskey Lima Golf is Darin Dance’s debut solo novel, but it’s not his first venture into writing. Having previously co-authored the Trinity Trilogy of books with fellow author Virginia Innes-Jones, Whiskey Lima Golf  is a bit of a change in direction for Darin (aka Ted Hughes); the co-written Trinity novels being satirical, romantic, murder mysteries while Whiskey Lima Golf, on the other hand, is a contemporary procedural spy novel set in Wellington.

The main protagonist Tāmati (Tom) is an Afghanistan veteran, sent home with physical and mental wounds, who quickly finds himself involved in a secret operation to identify foreign spies in Wellington. At the novel’s core is Tom’s relationships with his family, friends, loved ones and the various  interactions within and between these communities. The book draws extensively on Darin’s own past in the intelligence services.

When Darin agreed to be interviewed about Whiskey Lima Golf we were thrilled. We wish to extend our heartfelt thanks to Darin for taking time out of his busy schedule and for such an insightful and informative interview.

This interview was done in conjunction with Caffeine and Aspirin, the arts and entertainment review show on Radioactive FM. You can hear the full interview as well as find Darin’s books available to borrow, below:

Whiskey Lima Golf / Hughes, Ted (Ted D.)
“Whiskey Lima Golf  is  a contemporary procedural spy novel, set in  Wellington. The main protagonist Tāmati (Tom)  is an  Afghanistan veteran sent  home with physical and mental wounds. Who quickly finds himself involved in a secret operation to identify foreign spies in Wellington.  At the novels core is Tom’s relationships with  his family,   friends and loved ones and the various  interactions within and between  these communities .” ( Adapted from Catalogue)

Sharks with lipstick / Ellison, Hinemura
“Freshly back from Europe with a new job, Samantha Svensson reconnects with her old friends while managing a new role within the Big Super Ministry – where everyone is busy playing their own internal political games. After the HR Director ends up dead on the same train that Sven was on, suspicions abound, not least from the chief investigating police officer, Charlie Rogers, who happens to be her ex and is still incredibly damned hot! With Wellington still reeling after a recent big earthquake, Sven must use all her canny resourcefulness to clear her name and identify the killer within their midst.” (Adapted from Catalogue)

Snakes in suits / Ellison, Hinemura
“Freya returns to Wellington to restore her inheritance, ‘Portobello,’ an Art Deco building in Petone. Only to find dubious dealings with various Snakes in Suits, lawyers, bankers, the council and an unscrupulous property developer who will stop at nothing, even murder, to get what he wants – Portobello. Freya fights back with the help of her friend Zac – who just happens to be drop dead gorgeous. –Back cover.” (Adapted from Catalogue)

Scorpions in stilettos / Ellison, Hinemura
“Caught in a compromising position, Clara AKA Flat White, the classy, conservative career girl of the Trinity Trio, struggles as her carefully constructed life comes crashing down around her. Juggling a complicated love life, a career with bullying managers, a domineering mother and her own demons from the past, may be just a little too much even for her. Can Clara recover and navigate her way back with the help of her friends ?” (Adapted from Catalogue)