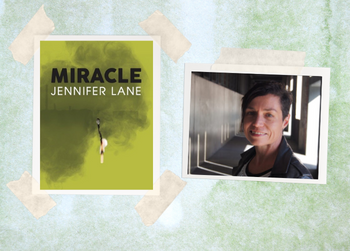 Jennifer Lane’s debut novel, All Our Secrets, established her as an author to keep a close eye on; quickly gaining rave reviews, the book went on to win the much-coveted Best First Novel Award at the Ngaio Marsh Awards in 2018. The novel,  set in small-town Australia in the 1980s, seethes with religious tensions and serial murders and is vividly told from the viewpoint of 11-year-old Gracie Barrett.

Since then, Jennifer has been working on her second novel Miracle which has just been released.

Once again, small-town Australian features as the book’s location – this time, the mystery centres around events at a crematorium. The book’s central teenage character “Miracle”  is a fabulous creation; funny and totally believable and who also has a colourful family  in tow. The resulting novel is great fun – a fabulous combination of believable small-town intrigue and boasts a twisty-turny plot; a combination that makes for a compelling and enjoyable read for both young adults and adults alike.

When Jennifer agreed to be interviewed about her new novel Miracle, we were thrilled. We wish to extend our heartfelt thanks to Jennifer for taking time out of her busy schedule and for such an insightful and informative interview.

This interview was done in conjunction with Caffeine and Aspirin, the arts and entertainment review show on Radioactive FM and was conducted by Tanya Ashcroft. You can hear the full interview, as well as find Jennifer’s books available to borrow, below Miracle / Lane, Jennifer
“Born in the middle of Australia’s biggest-ever earthquake, Miracle is fourteen when her world crumbles. Thanks to her dad’s new job at Compassionate Cremations — which falls under suspicion for Boorunga’s spate of sudden deaths — the entire town turns against their family. Miracle is tormented by her classmates, even by Oli, the boy she can’t get out of her head. She fears for her agoraphobic mother, and for her angelic, quake-damaged brother, Julian. When Oli plays a cruel trick on Miracle, he sets off a chain of devastating events. Then her dad is arrested for a brutal attack. Miracle takes the full weight on her shoulders. How can she convince the town of her dad’s innocence?” ( Adapted from Catalogue)

All our secrets / Lane, Jennifer
“A girl called Gracie. A small town called Coongahoola with the dark Bagooli River running through it. The Bleeders – hundreds of ‘Believers’ who set up on the banks of the river, who start to buy up the town and win souls. The River Children – born in the aftermath of the infamous River Picnic. They begin to go missing, one after another. Gracie Barrett is the naively savvy spokesperson for her chaotic family (promiscuous dad, angry mum, twins Lucky and Grub, Elijah the River Child and fervent, prayerful Grandma Bett), for the kids who are taken, for the lurking fear that locks down the town and puts everyone under suspicion. Gracie is funny and kind, bullied and anguished, and her life spirals out of control when she discovers she knows what no one else does: who is responsible for the missing children. Coongahoola is where hope and fear collide, where tender adolescence is confronted by death, where kindness is a glimmer of light in the dark.”(Adapted from Catalogue)