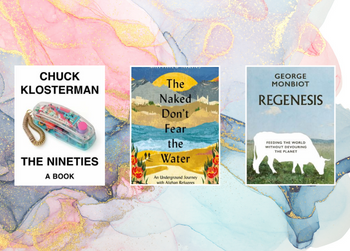 We have some top-notch journalism in this month’s picks. Matthieu Aikins writes about the refugee experience as he accompanies his friend Omar from Afghanistan to Europe. Hayley Campbell investigates the lives of those who work in and amongst the dead, while George Monbiot tackles the plight of our agricultural systems and explores how farming might be done otherwise. These are all well-researched, impactful books with deep connections to the subjects and communities they depict, while still being accessible entry-points for those new to the topic. As to the other highlights, down below you’ll find both true crime and tree crime, some nineties nostalgia, an exploration of non-human intelligence and an ode to the beloved objects in our lives.

The naked don’t fear the water / Aikins, Matthieu
“In 2016, a young Afghan driver and translator named Omar makes the choice to flee his war-torn country, saying goodbye to Laila, the love of his life, without knowing when they might be reunited again. He is one of millions of refugees who leave their homes that year. Matthieu Aikins, a journalist living in Kabul, decides to follow his friend. Their odyssey across land and sea from Afghanistan to Europe brings them face to face with the people at heart of the migration crisis. As setbacks and dangers mount for the two friends, Matthieu is also drawn into the escape plans of Omar’s entire family, including Maryam, the matriarch who has fought ferociously for her children’s survival.” (Adapted from Catalogue)

Regenesis : feeding the world without devouring the planet / Monbiot, George
“People talk a lot about the problems with intensive farming. But the problem isn’t the adjective. It’s the noun. Around the world, farming has been wiping out vast habitats, depleting freshwater, polluting oceans, and accelerating global heating, while leaving millions undernourished and unfed. Increasingly, there are signs that the system itself is beginning to flicker. But, as George Monbiot shows us in this brilliant, bracingly original new book, there is another way. Regenesis is an exhilarating journey into a profoundly hopeful, appetising and exciting vision of food: of revolutionary cultivation and cuisine that could nourish us all and restore our world of wonders.” (Adapted from Catalogue)

The widow of Walcha : a true story of love, lies and murder in a small country town / Partridge, Emma
“All farmer Mathew Dunbar ever wanted was to find love and have a family of his own. That’s why, just months after meeting Natasha Darcy, the much-loved grazier didn’t hesitate to sign over his multi-million-dollar estate to her. When Mathew died in an apparent suicide soon afterwards, in a stranger-than-fiction twist, Natasha’s estranged husband – who she was once charged with trying to kill – was the first paramedic on the scene. The Widow of Walcha is about one of the most extraordinary criminal trials in Australia’s history and reveals Natasha’s sickening crimes against those she claimed to love, fuelled by her obsession with money.” (Adapted from Catalogue)

Ways of being : beyond human intelligence / Bridle, James
“Recent years have seen rapid advances in ‘artificial’ intelligence, which increasingly appears to be something stranger than we ever imagined. At the same time, we are becoming more aware of the other intelligences which have been with us all along, unrecognized. These other beings are the animals, plants, and natural systems that surround us, and are slowly revealing their complexity and knowledge – just as the new technologies we’ve built are threatening to cause their extinction, and ours. What can we learn from these other forms of intelligence and personhood, and how can we change our societies to live more equitably with one another and the non-human world? We have so much to learn, and many worlds to gain.” (Adapted from Catalogue)

The things we love : how our passions connect us and make us who we are / Ahuvia, Aaron
“Why is it that we so often feel intense passion for objects? What does this tendency tell us about ourselves and our society? Dr. Aaron Ahuvia presents astonishing discoveries that prove we are far less “rational” than we think when it comes to our possessions and hobbies. In fact, we have passionate relationships with the things we love, and these relationships are driven by influences deep within our culture and our biology. Packed with fascinating case studies, scientific analysis, and takeaways for living in a modern and ever-so-material world, The Things We Love offers a truly original and insightful look into our love for inanimate objects.” (Adapted from Catalogue)

All the living and the dead : a personal investigation into the death trade / Campbell, Hayley
“We are surrounded by death. It is in our news, our nursery rhymes, our true-crime podcasts. Yet from a young age, we are told that death is something to be feared. How are we supposed to know what we’re so afraid of, when we are never given the chance to look? Journalist Hayley Campbell searches for answers from the people who see death every day. Why would someone choose a life of working with the dead? And what does dealing with death every day do to you as a person? A dazzling work of cultural criticism, All the Living and the Dead weaves together reportage with memoir, history, and philosophy, to offer readers a fascinating look into the psychology of Western death.” (Adapted from Catalogue)

The nineties / Klosterman, Chuck
“It was long ago, but not as long as it seems: The Berlin Wall fell and the Twin Towers collapsed. In the beginning, almost every name and address was listed in a phone book, and everyone answered their landlines because you didn’t know who it was. By the end, exposing someone’s address was an act of emotional violence, and nobody picked up their new cell phone if they didn’t know who it was. The ’90s brought about a revolution in the human condition we’re still groping to understand. Chuck Klosterman makes a home in all of it, writing a multi-dimensional masterpiece, a work of synthesis so smart and delightful that future historians might well refer to this entire period as Klostermanian.” (Adapted from Amazon UK)

Tree thieves : crime and survival in North America’s woods / Bourgon, Lyndsie
“The tree was poached in a two-part operation. It was felled one night and taken another. Here was a murder mystery in the deep woods: who had taken the cedar, how had they done so, and – most importantly – why? Featuring excellent investigative reporting, fascinating characters, logging history, political analysis and cutting-edge tree science, Tree Thieves takes readers on a thrilling journey into the intrigue, crime and incredible complexity sheltered under the forest canopy. It is a gripping account of the billion-dollar timber black market – and how it intersects with environmentalism, class, and culture. (Adapted from Amazon UK)