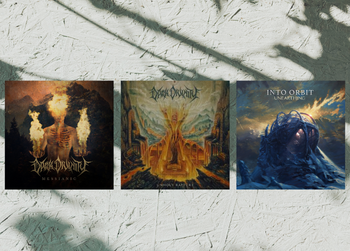 Have a listen to our interview with guitarists Paul Stewart and Jiji Aligno from Wellington melodic death metal band, Dark Divinity

The band formed in 2018 and have been blasting away in the local metal scene since, going through lineup changes, opening for several international legends pre-pandemic, and releasing an EP Messianic in 2020. This interview finds them on the cusp of self-releasing their debut full length album on CD, vinyl and digital, Unholy Rapture (released today, 22 September).

Paul and Jiji discuss writing and demoing music in the modern age, influences on their playing and songwriting, juggling multiple musical projects, the full DIY approach, and international acts returning to Aotearoa. The blueprint for Unholy Rapture, 5 tracks of blackened melodic death metal. While it features a slightly different lineup to the new album, this is the band’s first full release, locking in the combination of extreme metal blasting with an assault of tremolo picked riffs. The occasional touch of harmonised lead guitar gives just enough melody to balance out the rest of the grim atmosphere. Straddling the line between the oldschool and modern camps of death metal, Annihilation Cult features a huge amount of forearm-cramping riffs over virtuosic drumming and Jiji contributing guitar heroics, divebombs and hyperspeed licks for the dedicated shredheads – one of those albums that makes you feel the need to practice afterwards. Paul and drummer Ian layer it up with live-constructed loops of post-metal bass and guitar, building textures and layers at a higher pace than the post- tag would normally indicate. Once they’ve got their atmosphere laid out and melodies caught in your head, they lock in on some huge doom riffs at the higher tempo until it’s knocked over and they start building the next one.