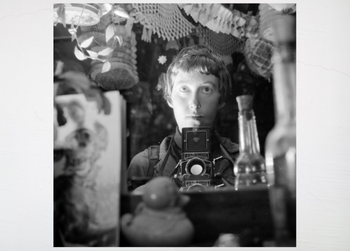 Purchased by Wellington City Libraries over 40 years ago, our complete collection from one of New Zealand’s most significant photographers of the 20th century is now available to view on Wellington City Recollect.

Ans Westra was born in 1936 in the small city of Leiden in southern Holland.  When she was a teenager she visited the legendary Family of Man photography exhibition when it was staged in Amsterdam as part of a world tour.  Inspired by what she saw, she started saving every guilder she could until she had enough money to purchase a camera. Unusually for the time, she chose to invest in a high-quality Rolleiflex medium-format camera rather than a ‘normal’ 35mm camera that most novices would have opted for and she continued to use this camera for most of her career.

In 1957 she joined the wave of Dutch emigres who were coming to New Zealand as part of an assisted passage scheme supported by the NZ Government. She briefly lived in Auckland where her father had moved to some years earlier but after several months she shifted to Wellington with the thought that it would only be a temporary stay before she returned to her native Holland. However, she quickly settled into her adopted city where she joined the Wellington Camera Club and found employment with the Rembrandt Photography Studios then located at 211 Cuba Street. By now her interest in photography had become a passion and she began to document New Zealand life in a manner rarely seen in that era. She found particular inspiration within Māori communities which until then had been largely ignored by contemporary photographers and she joined the pan-tribal Ngāti Pōneke cultural club. This interest led to her images first appearing in print in New Zealand when her work was used in several issues of Te Ao Hou, a quarterly magazine published by the Department of Māori Affairs. Further commissions followed from the Department of Education who used her photographs in a variety of publications including the NZ School Journal.

Westra was soon travelling across the country photographing different aspects of New Zealand life. However, it was in Wellington where her camera best captured the fabric of urban society as it was in the 1960s and 70s. Youth, street fashion and Wellington’s ethnic communities were all photographed in detail with Westra’s skill as a photographer often making it appear as if she were invisible to her subjects. As her reputation grew, her work appeared in a number of significant books including  Maori (1967), Notes on the Country I Live In (1972) and the capital-focussed Wellington City Alive (1976) with text by the novelist Noel Hilliard.

In the mid-1970s the newly appointed Local History Librarian, Hilda McDonnell, was tasked with establishing a photo collection for the Central Public Library (then located in what is today the City Art Gallery). Though images from a number of different local photographers were included, special emphasis was placed on the work of Ans Westra. Over 350 photographs which it was felt best represented different aspects of our city were selected from contact sheets and purchased by McDonnell. These photos were then hand-printed by Westra in her own darkroom where she would also crop the original square image produced by her Rolleiflex to fit the standard 5 x 4 ratio photographic paper common at the time. Though the camera had a fixed focal length (i.e. non-zoom) lens, the huge size of the negatives it produced and its high quality optics meant that Westra was able to crop an image to create her desired composition without any significant degradation of image quality.

By the 1990s, the increasing value and fragility of the original prints meant that it was becoming difficult to maintain public access to the photographs and they were shifted into storage, a problem further exacerbated by the closure of the central library in 2019. With the permission of Ans Westra’s representatives and her agent, {Suite} Gallery, we have been able to digitise this remarkable collection of her work and to make it available on our Recollect platform.

Wellington City Libraries wishes to thank and acknowledge Ans Westra and her agent, {Suite} Gallery for allowing us to digitise our collection of her work. Please note that the  images marked © above are under copyright to the photographer; please click on the link that accompanies each image to see how they can be used.