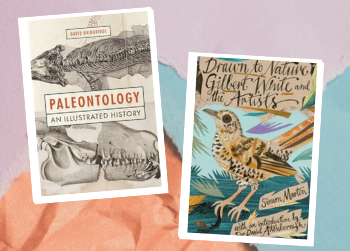 From the red planet to natural history, from palaeontology to resilience thinking – these new science books provide a range of reading for people who want to see what’s happening from a distance in time and space, and look to what’s in the future.

The red planet : a natural history of Mars / Morden, Simon
“As NASA lays its plans for a return to the moon and, from there, a manned mission to Mars, Planetary geologist, geophysicist and acclaimed SF author Dr Simon Morden takes us on a vivid guided tour of Mars. From its formation four and half billion years ago, through an era of cataclysmic meteor strikes and the millions of years during which a vast ocean spanned its entire upper hemisphere, to the long, frozen ages, Morden presents a tantalising vision of the next planet we will visit.” (Adapted from the Catalogue)

Drawn to Nature : Gilbert White and the Artists / Martin, Simon
“Gilbert White’s Natural History and Antiquities of Selborne has inspired generations of artists, writers and naturalists. From Thomas Bewick to Eric Ravilious and Clare Leighton, many artists’ depictions of animals, birds and wildlife have illustrated White’s celebrated book, together providing a microcosm of natural history illustration from the eighteenth century until today.  The book also includes an introduction to the life of Gilbert White by Sir David Attenborough, and an essay by Virginia Woolf.” (Adapted from the Catalogue)

A brief history of timekeeping : the science of marking time, from Stonehenge to atomic clocks / Orzel, Chad
“Our modern lives are ruled by clocks and watches, smartphone apps and calendar programs. Predating written language and marching on through human history, the desire for ever-better timekeeping has spurred technological innovation and sparked theories that radically reshaped our understanding of the universe. For those interested in science, technology who’s ever wondered about the instruments that divide our days into moments.” (Adapted from the Catalogue)

Perseverance and the Mars 2020 Mission : Follow the Science to Jezero Crater / Von Ehrenfried, Manfred Dutch
“The book takes readers through every stage of the Mars mission, describing its major goals and objectives, the cutting-edge technology and instrumentation onboard the Perseverance rover and other spacecraft components, and the members of the scientific team who steered the mission. The chapters therefore delve into how and why Jezero Crater was selected as the optimal landing and sample collecting site to meet the mission objectives.” (Adapted from Amazon.co.uk)

Do hard things : why we get resilience wrong and the surprising science of real toughness / Magness, Steve
“Steve Magness, a performance scientist who coaches Olympic athletes, rebuilds our broken model of resilience with one grounded in the latest science and psychology. Magness teaches us how we can work with our body – how experiencing discomfort, leaning in, paying attention, and creating space to take thoughtful action can be the true indications of cultivating inner strength. He offers four core pillars to cultivate such resilience: Smart and wise all at once. ” (Adapted from Amazon.co.uk)

Paleontology : an illustrated history / Bainbridge, David
“David Bainbridge recounts how legends of marvellous creatures gradually gave rise to the modern science of palaeontology, and how this pioneering discipline has reshaped our view of the natural world. Bainbridge discusses how contemporary palaeontologists use cutting-edge technologies to flesh out the discoveries of past and present. This panoramic book brings together stunning illustrations ranging from early sketches and engravings to eye-popping paleoart and high-tech computer reconstructions.” (Adapted from the Catalogue)

Supertall : how the world’s tallest buildings are reshaping our cities and our lives / Al, Stefan
“In Supertall, TED Resident Stefan Al-himself an experienced architect who has worked on some of the largest buildings in the world-reveals the advancements in engineering, design, and data science that have led to this worldwide boom. He  explores the ingenious technological innovations-in cement, wind resistance, elevator design, and air-conditioning-that make the latest megastructures a reality. And he examines the risks of wealth inequality, carbon emissions, and contagion.” (Adapted from the Catalogue)