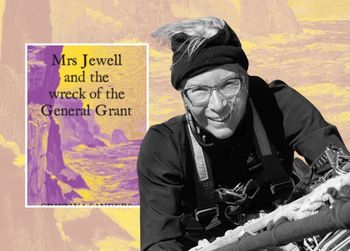 Bestselling author of Jerningham, Cristina Sanders has a new historical fiction novel just out called Mrs Jewell and the Wreck of the General Grant.

When a three masted sailing ship hits the cliffs of the Auckland Islands in 1866, only fourteen men and one woman survive . They struggle to live on this remote, freezing island and initially view the woman as a burden they could do without.

The novel is a vivid imagining of the story behind the enduring mystery of this early New Zealand shipwreck; a tale full of intrigue, mystery and gold. The story is based on historical fact, there have been numerous unsuccessful expeditions to find the wreck site location of the General Grant.

We were thrilled when Christina took time out from her very busy schedule to discuss Mrs Jewell and the Wreck of the General Grant, and we wish to extend our heartfelt thanks to her. For more information visit  Cuba press.

This interview was done in conjunction with Caffeine and Aspirin, the arts and entertainment review show on Radioactive FM. It was conducted by host Tanya Ashcroft. You can hear the interview, as well as find a selection of Cristina Sanders work that is available to borrow, below.

Mrs Jewell and the wreck of the General Grant. / Sanders, Cristina

” When a three masted sailing ship hits the cliffs of the Auckland Islands in 1866 only fourteen men and one woman survives . They struggle to survive on this remote, exposed, and freezing island and initially view the woman as a burden they could do without .” ( Adapted from Catalogue)

Jerningham / Sanders, Cristina
“Edward Jerningham Wakefield was the wild-child of the Wakefield family that set up the New Zealand Company to bring the first settlers to this country. His story is told through the eyes of bookkeeper Arthur Lugg, who is tasked by Colonel William Wakefield to keep tabs on his brilliant but unstable nephew. As trouble brews between settlers, government, missionaries and Māori over land and souls and rights, Jerningham is at the heart of it, blurring the line between friendship and exploitation and spinning the hapless Lugg in his wake. Alive with historical detail, Jerningham tells a vivid story of Wellington’s colonial beginnings and of a charismatic young man’s rise and inevitable fall.” (Catalogue)