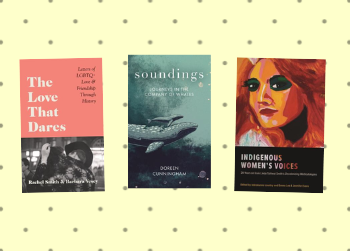 In the spirit of Out on the Shelves, this month we’re highlighting The Love That Dares, a thoughtful and moving collection of letters on LGBT+ love and friendship. The authors Rachel Smith and Barbara Vesey have carefully chosen which pieces of correspondence to include, presenting each letter alongside information about the writer and the historical context, and the result is a wonderful little book that opens a window onto the past – in this case, a past that hasn’t often been easily accessible. The additional context adds a lot of value, but as you would expect it is the letters themselves which make up the heart and soul of this book. We recommend checking it out!

As for the other non-fiction picks for this month, if you’re after something a little spooky and superstitious, why not try The Premonitions Bureau or The Ruin of All Witches? The first is about John Barker, a psychiatrist who attempted to collate premonitions of disaster in the 1960s, while the latter looks into the colonial-era witch hunts in Massachusetts, focusing on the experiences of one family. We’re also particularly excited to check out Soundings, a lyrical blend of nature writing and memoir, which tells the tale of a mother and her son as they follow migrating whales in the Arctic.

The love that dares : letters of LGBTQ+ love & friendship through history/ / Smith, Rachel
“A good love letter can speak across centuries, and reassure us that the agony and the ecstasy one might feel today have been shared by lovers long gone. In The Love That Dares, queer love speaks its name through a wonderful selection of surviving letters between lovers and friends, confidants and companions. Alongside the more famous names coexist beautifully written letters by lesser-known lovers. Together, they weave a narrative of queer love through the centuries, through the romantic, often funny, and always poignant words of those who lived it.” (Adapted from Catalogue)

Soundings : journeys in the company of whales / Cunningham, Doreen
“Doreen first visited Utqiagvik, the northernmost town in Alaska, as a young journalist reporting on climate change among indigenous whaling communities. Years later, plunged into sudden poverty and isolation after becoming a single parent, Doreen embarks on an extraordinary journey: following the grey whale migration all the way north to the Iñupiaq family that took her in. Soundings is the story of a woman reclaiming her life, mile by mile; a child growing to love an ocean that is profoundly endangered; and a mother learning from another species how to parent in a time of unprecedented change.” (Adapted from Amazon UK)

Indigenous women’s voices : 20 years on from Linda Tuhiwai Smith’s Decolonizing methodologies
“This collection celebrates the breadth and depth of how Indigenous writers are shaping the decolonizing research world today. With contributions from Indigenous female researchers, this collection offers the much needed academic space to distinguish methodological approaches, and overcome the novelty confines of being marginal voices.” (Catalogue)

The ruin of all witches : life and death in the New World / Gaskill, Malcolm
“The Ruin of All Witches tells the dark, real-life folktale of witch-hunting in a remote Massachusetts plantation. These were the turbulent beginnings of colonial America, when English settlers’ dreams of love and liberty gave way to paranoia and terror, enmity and rage. Drawing on uniquely rich, previously neglected source material, Malcolm Gaskill brings to life a New World existence steeped in the divine and the diabolic, in curses and enchantments, and precariously balanced between life and death.” (Adapted from Catalogue)

The premonitions bureau : a true account of death foretold / Knight, Sam
“On the morning of October 21, 1966, Kathleen Middleton, a music teacher in suburban London, awoke choking and gasping, convinced disaster was about to strike. An hour later, a mountain of rubble containing waste from a coal mine collapsed above the village of Aberfan. Psychiatrist John Barker became convinced there had been supernatural warning signs of the disaster, and decided to establish a “premonitions bureau” to collect dreams and forebodings from the public. Middleton was one of hundreds of seemingly normal people, who would contribute their visions to Barker’s research in the years to come, some of them unnervingly accurate.” (Adapted from Catalogue)

The uncaged sky / Moore-Gilbert, Kylie
“On September 12, 2018 British-Australian academic Kylie Moore-Gilbert was arrested at Tehran Airport by Iran’s feared Islamic Revolutionary Guards. Incarcerated in Tehran’s Evin and Qarchak prisons for 804 days, this is the full and gripping account of her harrowing ordeal. After more than two years of struggle, Kylie was finally released in a high stakes three-nation prisoner swap deal orchestrated by the Australian government, laying bare the complex game of global politics in which she had become a valuable pawn.” (Adapted from Catalogue)

Recovery : the lost art of convalescence / Francis, Gavin
“When it comes to illness, sometimes the end is just the beginning. Recovery and convalescence are words that exist at the periphery of our lives – until we are forced to contend with what they really mean. Here, GP and writer Gavin Francis explores how – and why – we get better, revealing the many shapes recovery takes, its shifting history and the frequent failure of our modern lives to make adequate space for it. Characterised by Francis’s beautiful prose and his view of medicine as ‘the alliance of science and kindness’, Recovery is a book about a journey that most of us never intend to make.” (Adapted from Catalogue)

Dogs in early New Zealand photographs
“This entertaining selection of over 100 photos of New Zealand dogs reveals some of the more curious ways in which they have appeared in photographic collections from the nineteenth and early twentieth centuries. The photographs take the reader across the towns and landscapes of Aotearoa New Zealand, and the text profiles many of the photographers and studios that flourished prior to the First World War. It also pays tribute to the museums and galleries that now care for these delightful collections.” (Adapted from Catalogue)