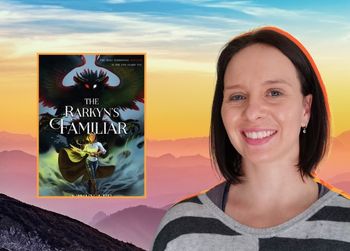 How long can it take to write an epic young adult fantasy novel ?
How do you go about creating an immersive and detailed fantasy world ?
How do you go about writing believable and compelling fantasy creatures ?
What does it take as a writer to bring such a huge project to a successful fruition ?
What is it like to win a PitDark publishing competition ?
And indeed what is a PitDark publishing competition ?

Well, our interview with debut fantasy novelist Nikky Lee reveals the answers to all these questions.

Fantasy novelist Nikky Lee has just released her first full length novel, The Rarkyn’s Familiar. The book  is a thrilling, young adult high fantasy epic tale (the first in a series), set in a wonderfully imagined and detailed fantasy universe.  The tale revolves round a young girl, Lyss, who accidently gets magically bonded to a half bird half  person creature called a Rarkyn; A bond that threatens to drive her mad. The book is a quest tale that features various forms of magic, and a narrative where different types of worlds intersect . At its core, the novel explores themes of acceptance, revenge, redemption and how to deal with anxiety.

Lee grew up in Western Australia and now lives in Aotearoa New Zealand with a husband, a dog and a couch potato cat. Whilst The Rarkyn’s Familiar is Nikky’s first novel, it is far away from her first published work. Nikky has already won a whole host of awards for her short stories, as well as being published in numerous magazines, anthologies. Nikky has also had works broadcasted on the radio.

We are thrilled that Nikky Lee took time out from her very busy schedule to discuss her new book, and

we wish to extend our heartfelt thanks to her. For more information visit www.nikkythewriter.com.

This interview was done in conjunction with Caffeine and Aspirin, the arts and entertainment review show on Radioactive FM. You can hear the interview below. You can also place a reserve for The Rarkyn’s Familiar which is due into the library soon, for details see below.

Rarkyn’s Familiar. / Lee, Nikky
“A perfect story for fans of Sarah J. Maas’ THRONE OF GLASS. An orphan bent on revenge. A monster searching for freedom. A forbidden pact that binds their fates. Lyss had heard her father’s screams, smelled the iron-tang of his blood. She witnessed his execution. And plotted her revenge. Then, a violent encounter traps Lyss in a blood-pact with a Rarkyn from the otherworld, imbuing her with the monster’s forbidden magic-a magic that will erode her sanity. To break the pact, she and the Rarkyn must journey to the heart of the Empire. All that stands in their way are the mountains, the Empire’s soldiers, and Lyss’ uneasy alliance with the Rarkyn. But horrors await them on the road-horrors even Rarkyns fear. The most terrifying monster isn’t the one Lyss travels with. It’s the one that’s awoken inside her. Monsters of a feather flock together.” (Adapted from Catalogue)