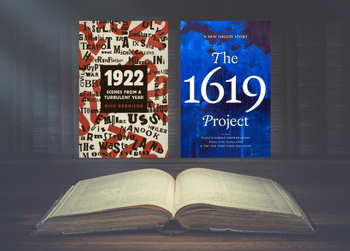 What did the world look like in 1922, one hundred years ago, coming out of a World War and a pandemic? Time and history march on, but upheaval and change is a constant. Have a browse of this month’s new history books.

The 1619 Project : a new origin story
“The animating idea of The 1619 Project is that the US national narrative is more accurately told if we begin not on July 4, 1776, but in late August of 1619, when a ship arrived in Jamestown bearing a cargo of twenty to thirty enslaved people from Africa. Their arrival inaugurated a barbaric and unprecedented system of chattel slavery that would last for the next 250 years. This is sometimes referred to as the country’s original sin, but it is more than that: It is the country’s very origin. The 1619 Project tells this new origin story, placing the consequences of slavery and the contributions of Black Americans at the center of the story we tell ourselves about who we are as a country. Orchestrated by the editors of The New York Times Magazine, led by MacArthur “genius” and Pulitzer Prize-winning journalist Nikole Hannah-Jones.” (Catalogue)

1922 : scenes from a turbulent year / Rennison, Nick
“1922 was a year of great turbulence and upheaval. The world had just emerged from a war that had killed millions of people and a global pandemic that had ended the lives of tens of millions more. Its events reverberated throughout the rest of the twentieth century and still affect us today. Empires fell. The Ottoman Empire collapsed after more than six centuries. The British Empire had reached its zenith but its heyday was over. The Irish Free State was declared and demands for independence in India grew. New nations and new politics came into existence. The Soviet Union was officially created and Mussolini’s Italy became the first Fascist state. In the USA, Prohibition was at its height. The Hollywood film industry, although rocked by a series of scandals, continued to grow. A new mass medium – radio – was making its presence felt and the BBC was founded…” (Catalogue)

The searchers : the quest for the lost of the First World War / Sackville-West, Robert
“By the end of the First World War, the whereabouts of more than half a million British soldiers were unknown. Most were presumed dead, lost forever under the battlefields of northern France and Flanders. In The Searchers, Robert Sackville-West brings together the extraordinary, moving accounts of those who dedicated their lives to the search for the missing. These stories reveal the remarkable lengths to which people will go to give meaning to their loss: Rudyard Kipling’s quest for his son’s grave; E.M. Forster’s conversations with traumatised soldiers in hospital in Alexandria; desperate attempts to communicate with the spirits of the dead; the campaign to establish the Tomb of the Unknown Warrior; and the exhumation and reburial in military cemeteries of hundreds of thousands of bodies. It was a search that would span a century: from the department set up to investigate the fate of missing comrades in the war’s aftermath, to the present day, when DNA profiling continues to aid efforts to recover, identify and honour these men.” (Catalogue)

The war of nerves : inside the Cold War mind / Sixsmith, Martin
“More than any other conflict, the Cold War was fought on the battlefield of the human mind. Nearly thirty years since the collapse of the Soviet Union, its legacy still endures: not only in our politics, but in our own thoughts and fears. Drawing on a vast array of untapped archives and unseen sources, Martin Sixsmith vividly recreates the tensions and paranoia of the Cold War, framing it for the first time from a psychological perspective. Revisiting towering personalities like Khrushchev, Kennedy and Nixon, as well as the lives of the unknown millions who were caught up in the conflict, this is a gripping account of fear itself – one which is more resonant than ever today.” (Catalogue)

The forty-year war in Afghanistan : a chronicle foretold / Ali, Tariq
“The fall of Kabul to the Taliban on 15 August 2021 is a major political and ideological defeat for the American Empire. History sometimes presses urgent truths on a country through a vivid demonstration of the facts. The withdrawal from Afghanistan is one such moment…” (Catalogue) 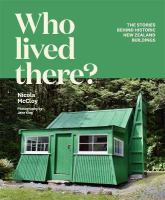 Who lived there? : the stories behind historic New Zealand buildings / McCloy, Nicola
“From basic stone cottages in barren-looking countryside to pretty coastal villas, romantic churches and small-town taverns, New Zealand is full of buildings whose back stories have been lost over the generations. Jane King’s photographs and Nicola McCloy’s words weave the facts back together to present gripping stories of these places and their ups and downs over time. The strength of women, often left to fend for their families with little help or support, and the enterprise of early New Zealanders feature in this fascinating book… Find out about places as diverse as the old School of Mines in Thames, Rush Munroe’s Ice Cream Garden in Hastings; Couldrey House at Wenderholm, near Auckland; the National Tobacco Company in Napier; Mt Cook Police Barracks in Wellington; Langlois-Eteveneaux House in Akaroa; Donovan’s General Store in Okarito; and the Empire Tavern in Dunedin.” (Catalogue)