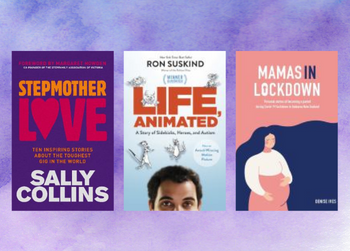 It’s tough being a care-giver at the best of times, yet this special role can provide one of life’s greatest rewards. This inspiring selection comes from the pens of parents themselves, reflecting on their own highlights and lowlights as they encourage and support their children and families to be the best they can be.

Stepmother love : ten inspiring stories about the toughest gig in the world / Collins, Sally Katherine
“Ten inspiring stories from the frontline of parenting. Stepmother Love tells the stories of ten women who have chosen to take on the challenge of making a positive contribution to the lives of their stepchildren. There are no rose-coloured glasses, but there are many enriching insights into these families’ journeys to find happiness. This reveals how these women overcame grief, hostility and even disinterest to build loving, long-term, trusting relationships with their stepchildren. An inspiring collection of stories that will uplift, help and support any woman who is doing the toughest parenting gig of all – as well as acknowledge their tough role and the courage it takes to make it work. ” (drawn from the Catalogue)

Life, animated : a story of sidekicks, heroes, and autism / Suskind, Ron
“A New York Times Bestselling Author and A Pulitzer Prize’ winning Author. This is the real-life story of Owen Suskind, as told by his dad. Owen, an autistic boy who couldn’t speak for years, he memorized dozens of Disney movies, turning them into a language to express love, loss, kinship and brotherhood. His mom, dad and brother communicated with Owen in Disney dialogue and song until they all emerged together, revealing how, in darkness, we all literally need stories to survive.” (Adapted from the Catalogue)

Bringing up bébé : one American mother discovers the wisdom of French parenting / Druckerman, Pamela
“When American journalist Pamela Druckerman has a baby in Paris, she doesn’t aspire to become a “French parent.” …With a notebook stashed in her diaper bag, Druckerman (a former reporter for the Wall Street Journal) sets out to learn the secrets to raising a society of good little sleepers, gourmet eaters, and reasonably relaxed parents. She discovers that French parents are extremely strict about some things and strikingly permissive about others. And she realizes that to be a different kind of parent, you don’t just need a different parenting philosophy. You need a very different view of what a child actually is.” (drawn from the publisher)

An Uncomplicated Life : A Father’s Memoir of His Exceptional Daughter / Daugherty, Paul
“Jillian Daugherty was born with Down syndrome. The day her parents, Paul and Kerry, brought her home from the hospital, they were flooded with worry and uncertainty, but also with overwhelming love, which they channelled to “the job of building the better Jillian”. They knew their daughter had special needs, but they refused to have her grow up needy. Paul tells stories about Jillian which inspired others to live better and more fully.” (Adapted from the Catalogue)

Raising the perfectly imperfect child / Vujicic, Boris
“Nick Vujicic, who was born with no arms or legs, has overcome steep challenges, and now Nick travels worldwide and inspires millions via speaking and media appearances, is married and a father himself. He acknowledges that overcoming his physical challenges would have been impossible without the wise and effective efforts of his parents and family. Nick’s father speaks about what it took to parent such a unique child, with practical advice for raising a child with special needs. ” (Adapted from the Catalogue)

Finding Ben : a mother’s journey through the maze of Asperger’s / LaSalle, Barbara
“Barbara LaSalle’s first son, Ben, was an extraordinarily gifted child. For the first few years of his life, he amazed his mother with his brilliance and creativity, speaking in full sentences before age one and reading competently by age two. … In this frank account, Barbara LaSalle reveals what it’s really like to parent a child with a neurological disorder, communicating her son’s unique perception of the world while describing her own struggle to love an “unpresentable” son. Burdened for many years with the fear that the world might look at Ben and somehow see her own failure, LaSalle is now able to delve deep into her own story, and Ben’s, to tell the unvarnished truth. She paints a powerfully honest portrait of how a mother’s love can turn into bitterness at having to raise a special-needs child and how, by opening herself to the wisdom of others, she can at last learn to love her child – and herself – once again.” (drawn from the book jacket).