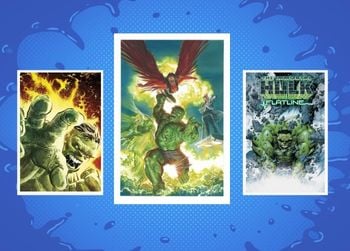 The Immortal Hulk was a critically-acclaimed and fan-beloved run of one of Marvel’s most popular and complex heroes, Dr Bruce Banner and his ‘system’ of alter egos: the child-like Savage Hulk, the morally ambiguous Grey Hulk or ‘Joe Fixit’, and the protective and paternalistic Immortal Hulk. Concluding in October 2021, the series was written by Al Ewing and drawn by Joe Bennett, and centres on a new revelation about the character: Bruce Banner can die but the Hulk cannot. Which makes them, as the title suggests, immortal.

With this undead twist, Ewing and Bennett used the opportunity to turn Hulk into a horror book. The newly-minted Immortal Hulk battled such terrors as radioactive zombies, paranormal possessions, city-destroying kaiju, the Devil, the legions of Hell, and a cyborg yeti alien who can manipulate people’s minds through smartphones. Gradually, the series expanded its scope to ask fundamental questions about the nature of man and our own ‘immortal’ obsessions with death, the afterlife, and the relationships we have to our emotions, our friends, our institutions, our society, and the divine. The final issues of The Immortal Hulk go both deeply personal and expansively cosmic, as Bruce confronts his ex-wife Betty (now a monster of her own called ‘The Red Harpy’), his potential for happiness had he not been turned into a monster, and eventually God Himself to ask “why does Hulk have to be Hulk at all?”

Every issue of The Immortal Hulk opens with a quote from a famous book or writer, chosen by Ewing to give thematic weight to each issue and something for the audience to ponder on a close reading. Below, I’ve picked out some of the best opening quotations from volumes ten, eleven, and the ‘Great Power’ spin-off collection of The Immortal Hulk, and linked them to the works of their respective writers so you can find them in our collection.

If you want to read the comic first, you can order the first volume here or read it on Libby here. Check out the previous editions of this blog (Part One, Two, and Three) to read about all the references in the first nine volumes, and if you’ve read up to volume ten, reserve it here.

The best story of the ‘Great Power’ collection, which collects other writer’s takes on the Immortal Hulk, is Irish writer/artist Declan Shalvey’s ‘Flatline’, set early in the series when Bruce is still grappling the Immortal Hulk persona and his new inability to die. Shalvey opens the issue with a segment of the poem ‘Death’ by one of his homeland’s greats, William Butler Yeats. The poem reminds the reader that while we can personify Death all we like, we can never actually meet it on our terms face-to-face. Throughout the issue, death separates Banner from the Immortal Hulk, as one literally becomes the other upon dying, never to actually meet, and this tension fuels their early animosity.

“If these shadows remain unaltered by the future, the child will die” – A Christmas Carol / Dickens, Charles

My favourite issue of the ‘Apocrypha’ collection (Volume 11) is ‘Black Christmas’. Stuck in a snowy, vacant New York on Christmas and under attack by symbiotes, Joe Fixit and Savage Hulk take shelter in a department store. When the attack is over, Joe treats the child-minded Savage Hulk to a night in the store’s toy section. On this lovely scene, however, we get the only quote that ends an issue rather than opening it, one from Charles Dickens’ A Christmas Carol. Addressed to Scrooge by the Ghost of Christmas Present, the line is a grim portent of Tiny Tim’s death if Scrooge does not end his selfish ways and treat Bob Cratchit to a fair wage to support his family. It’s a great payoff to Joe Fixit’s arc of learning how to be a more considerate person to other people and deepens his relationship between his fellow Hulk personas, particularly as a protector to Savage Hulk in the Immortal Hulk’s absence.

“Vengeance is from the individual — punishment belongs to God.” –  The last day of a condemned man / Hugo, Victor

As a genre, superhero comics are built on the idea that there is clear good and evil, meaning moral ambiguity has to be explored not through justice itself, but through the specific mechanics of justice. In issue 46, the government sends the Avengers to take Hulk out once and for all, with Thor landing the first blow. The issue opens with a line from Victor Hugo’s 1829 preface to his novelette against capital punishment, The Last Day of a Condemned Man, in which he argues that society sits between the individual desire to seek vengeance after a criminal act and the divine act of punishment from above. Hugo concludes that society cannot punish because that choice alone belongs to God. Ewing dramatizes this idea in Immortal Hulk through Thor, who acts as both a state-sanctioned superhero seeking to do right and a god tasking himself with ridding Midgard of the Hulk, as the Hulk fights back, rejecting Thor’s authority on both counts.

“I, like the arch-fiend, bore a hell within me, and finding myself unsympathised with, wished to tear up the tree, spread havoc and destruction around me, and then to have sat down and enjoyed the ruin” –  Frankenstein, or, The modern Prometheus / Shelley, Mary Wollstonecraft

As the Hulk has his rematch with the Avengers, rage seems to flow out of him to infect everyone else, leading to a massive battle in New York. Stan Lee, co-creator of the Hulk, has said that one of his inspirations for the Hulk was Frankenstein’s Monster. Like the Immortal Hulk, the Monster is a brutish creature born of science, grappling with his place in the cosmic order, and capable of both eloquence and savagery. Thor believes Hulk to be Midgard’s ‘god of wrath’ and the blight on the World Tree, further tying him to how the Monster identifies himself in the book by Mary Shelly.

“And I dream of a grave, deep and narrow, where we could clasp each other in our arms as with iron bars, and I would hide my face in you and you would hide your face in me, and nobody would ever see us any more” – The castle / Kafka, Franz

The Castle is Kafka’s last novel, a paranoid dystopian story about a man, ‘K’, investigating a shadowy bureaucracy operating from the titular castle. The Immortal Hulk quotes a passage where ‘K’ and his fiancée Frieda argue about their relationship. Frieda laments that K is too distracted by his job, and she is so lonely as a result that she finds comfort in her dream of them holding each other close in a grave. Issue 48 focuses on the Hulk and his ex-wife Betty, the Red Harpy, as they reflect on their relationship, most of which was defined by hiding from their own ‘Castle’, be it the authorities hunting them down or Banner’s multiple Hulk alter egos getting in their way. As the series nears its end, we see how Hulk and Betty both had to change and be resurrected (in Hulk’s case, multiple times) to finally be honest about who they are and what they mean to each other. Love expressed through the grave, indeed.

“Through me you pass into the City of Woe: Through me you pass into eternal pain: through me among the people lost for aye. Justice the founder of my fabric mov’d: to rear me was the task of power divine, supremest wisdom, and primeval love. Before me things create were none, save things eternal, and eternal I endure” – Inferno : a verse translation / Dante Alighieri

The penultimate issue of the series sees Hulk mounting a rescue mission to the Below-Place to save Banner from the Leader. Using the Fantastic Four’s ‘Forever Gate’, Hulk sees a vision of a possible Bruce Banner, without the Hulk, truly happy with his family and supporting cast. It’s a life that Banner can never have and never could, because the Hulk isn’t in it, which Hulk has to bear witness to before he sets off to rescue his ‘puny’ human persona. Seeing the Hulk at his most pensive and uneasy, it’s befitting in an issue about standing on a threshold that the chosen quote precedes the most quoted passage of Dante’s Inferno, the phrase above the gateway to Hell; “All hope abandon, ye who enter here”.

“I behold thee Enkidu; like a god thou art. Why with the animals wanderest thou on the plain?” –  Gilgamesh : a new English version

The Apocrypha collects an The Immortal Hulk spinoff called ‘Time of Monsters’ which depicts the first-ever Hulk in ancient Jordan, circa 9500 BCE. The opening quote compares the Hulk to Enkidu, the ‘wild man’ from one of the earliest surviving pieces of literature, The Epic of Gilgamesh. While he is positioned as being from outside civilisation due to his wild status, Enkidu is no less heroic, helping the more traditional hero Gilgamesh in his adventures, despite eventually perishing after being punished by the gods. An unconventional hero seemingly more beast than man, who is positioned against civilisation and the gods and dies tragically? To my mind, it shows that since we first started writing stories, there has always been a Hulk.

A Final Note on Theme: The Left Hand is Strength, but the Right Hand is Mercy – Kabbalah : a very short introduction / Dan, Joseph

So you may be thinking having reached the end of the series, what was the deal with The One-Above-All calling Hulk ‘Geburah’ and ‘Golachab’? And what exactly of ‘Chesed’? These are references to Kabbalah, a practice of mysticism from Judaism. In Kaballah, a mystic traces a path through ‘the Tree of Life’ which contains ten heavenly spheres called the Sephirot, each representing an attribute of God (two of which are Geburah and Chesed), in order to better understand the divine with themselves. The Sephirot also has an inverse tree in the Qlippoth, which have opposing negative qualities to each Sephirot (Golachab as the Qlippoth to Geburah). A running theme of The Immortal Hulk is what the Hulk represents as an entity and what he should choose to do with his immeasurable strength, and tying this to Kaballah allows that idea to be explored within the bounds of morality and obligation, particularly in whether we should act with condemnation or compassion towards others.