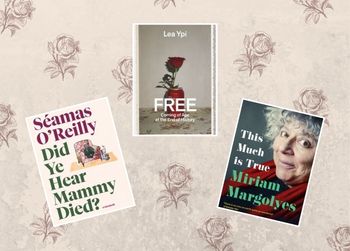 “A reader lives a thousand lives before he dies, and the one who doesn’t read, lives just one.” – George RR Martin

Dive into someone else’s life for a bit with our new biographies! This month we’ve got a wide range of stories, from standing in front of a Taliban warlord’s home to a drag queen’s rise to stardom. Other highlights from the below list include New York Times bestselling author Jami Attenberg on her journey as a writer, Miriam Margolyes on her rip-roaring life as an actor and The Sunday Times Memoir of the Year, Free : coming of age at the end of history.

I came all this way to meet you : writing myself home / Attenberg, Jami
“From New York Times bestselling author Jami Attenberg comes a dazzling memoir about unlocking and embracing her creativity-and how it saved her life”– Provided by publisher. Attenberg reveals the defining moments that pushed her to create a life and a voice she could claim for herself. Drawn to a life on the road, her wanderlust led her across the country and eventually around the globe. She began to reflect on the experiences of her youth, and began writing: researching articles for magazines, jotting down ideas for novels, and refining her craft, learning to trust her gut, and ultimately, trust herself. ” (Adapted from Catalogue)

Empower : conquering the disease of fear / Azim, Tareq
“If you knock on Wakil’s door, he’s going to kill you.” That’s what Tareq Azim’s guide told him, as they stood at the foot of the local Taliban warlord’s home. Most people would let fear get the better of them. However, Tareq had already conquered fear. He walked up to the door by himself, and gave three loud knocks.” (Adapted from Catalogue)

The tick of two clocks : a tale of moving on / Bakewell, Joan
“Old age is no longer a blip in the calendar, just a few declining years before the end. Old age is now a major and important part of life: It should command as much thought – even anxiety – as teenagers give to exam results and young marrieds how many children to have . . . I am in my 80s and moving towards the end of my life. But in a more actual sense, I have moved from my dear home of 50 odd years into another . . . the home where I will be until the end.” (Adapted from Catalogue)

Caught in the act : a memoir / Jenek, Shane
“Meet Shane Jenek. Raised in the Brisbane suburbs by loving parents, Shane realises from a young age that he’s not like all the other boys. At a performing arts agency he discovers his passion for song, dance and performance, and makes a promise to himself: to find a bigger stage. Meet Courtney Act. Born in Sydney around the turn of the millennium, Courtney makes her name in the gay bars of Oxford Street and then on Australian Idol. Over ten years later, she makes star turns on RuPaul’s Drag Race and Celebrity Big Brother UK, bringing her unique take on drag and gender to the world. Behind this rise to national and global fame is a story of searching for and finding oneself.” (Adapted from Catalogue)

This much is true / Margolyes, Miriam
“BAFTA-winning actor, voice of everything from Monkey to the Cadbury’s Caramel Bunny, creator of a myriad of unforgettable characters from Lady Whiteadder to Professor Sprout, Miriam Margolyes is the nation’s favourite (and cheekiest) treasure. Now at the age of eighty, she has finally decided to tell her life story, and it’s well worth the wait.” (Adapted from Catalogue)

Did ye hear mammy died? / O’Reilly, Séamas
“Did Ye Hear Mammy Died? is Seamas O’Reilly’s memoir of growing up as one of eleven children in rural Northern Ireland in the 1990s after the death of their mother when Seamas was five. He delves into his family – his pleasingly eccentric, reticent but deeply loving father; his rambunctious siblings, intent on enforcing a byzantine age-based hierarchy; and the numerous bewildering friends, relations and neighbours who blew in and out to ‘help’. Seamas describes how his mother’s death changed his childhood relationships with everyone and everything, as knowledge of his tragic experience preceded him.” (Catalogue)

My mess is a bit of a life : adventures in anxiety / Pritchett, Georgia
“Television writer and producer Georgia Pritchett knows a thing or two about anxiety. From worrying about the monsters under her bed as a child (Were they comfy enough?), to embracing womanhood (One way of knowing you have crossed from girlhood to womanhood is that men stop furtively masturbating at you from bushes and start shouting things at you from cars. It’s a beautiful moment) to being offered free gifts after an award ceremony (It was an excruciating experience. Mortifying) worry has accompanied her at every turn. This memoir is a joyful reflection on just how to live and sometimes even thrive (sometimes not) with anxiety”–Publisher’s description.” (Catalogue)

Free : coming of age at the end of history / Ypi, Lea
“Lea Ypi grew up in one of the most isolated countries on earth, a place where communist ideals had officially replaced religion. Albania, the last Stalinist outpost in Europe, was almost impossible to visit, almost impossible to leave. It was a place of queuing and scarcity, of political executions and secret police. To Lea, it was home. People were equal, neighbours helped each other, and children were expected to build a better world. There was community and hope. Then, in December 1990, a year after the fall of the Berlin Wall, everything changed.” (Adapted from Catalogue)