This year is a big year for sports fans: Cricket World Cup and Soccer World Cup. This blog has selected a range of books about two of the world’s most popular sports and famous players in New Zealand and abroad. Let’s also pay tribute to sports stars who recently passed away: Cricket star Shane Warne, and Rugby star Joeli Vidiri.

On Warne / Haigh, Gideon
“More than a plain life story, this book offers a brilliant portrait of Warnie’s craft, an analysis of his career through the lens of his key relationships and biggest misdemeanours, and a personalised portrait of the man as he evolved from the pizza-scoffing prodigy. Drawing on interviews conducted with Warne over the course of a decade, and two decades of watching him play, the author assesses this greatest of sportsmen as cricketer, character, comrade, newsmaker and national figure.” (Adapted from the Catalogue)

Why soccer matters / Pelé
“Fans of the world’s most popular sport have agreed on one thing: the greatest player of all time was Pelé. Now he shares his story, his experience, and his insights on the game. A national treasure, he created pure magic with his accomplishments on the field: an unprecedented three World Cup championships and the all-time scoring record, with 1,282 goals in his twenty year career. Brazil often credited with perfecting the sport – soccer has a unique opportunity to encourage change on a global level.” (Adapted from the Catalogue)

Playing it my way : my autobiography / Tendulkar, Sachin
“The greatest run-scorer in the history of cricket, Sachin Tendulkar retired in 2013 after an astonishing 24 years at the top. The most celebrated Indian cricketer of all time, he received the Bharat Ratna Award – India’s highest civilian honour. Now Sachin Tendulkar tells his own remarkable story – When a boisterous Mumbai youngster’s excess energies were channelled into cricket, the result was record-breaking schoolboy batting exploits that launched the career of a cricketing phenomenon.” (Adapted from the Catalogue) 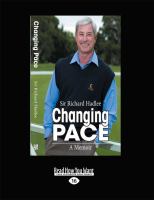 Changing pace : a memoir / Hadlee, Richard
“Memoir by New Zealand’s best cricket player in history, Sir Richard Hadlee. After the peak in cricket career and turmoil in life, he became a cricket ambassador and commentator, and then as the chairman of selectors for New Zealand Cricket. This book reveals the thinking behind the selectors decisions during his tenure, the steady improvement in the national team over that time and the controversial events of the 2003 Cricket World Cup in South Africa. ” (Adapted from Amazon.co.uk)

The meaning of cricket : or, How to waste your life on an inconsequential sport / Hotten, Jon
“Cricket is a team game that is almost entirely dependent on individual performance: almost ninety percent of one side is not taking part. In its combination of time, opportunity, a constant threat of disaster, and its ability to drive its participants to despair, cricket is unrivalled. To survive a single delivery propelled at almost one hundred miles an hour takes the body and brain to the edges of their capabilities.”  (Adapted from the Catalogue)

The World Cup : heroes, hoodlums, high-kicks and head-butts / Hansford, Paul
“This book has a strong, irreverent and humourous writing voice. It concentrates on the stories behind the legends, teams and great matches of the World Cup, putting aside the pundits’ picks for who will win (they invariably get it wrong anyway) and concentrating on the weird, whacky, controversial and legendary moments of the sports. This book covers brilliant tales and heroes and greatest matches which also deserve examination. ” (Adapted from the Catalogue)