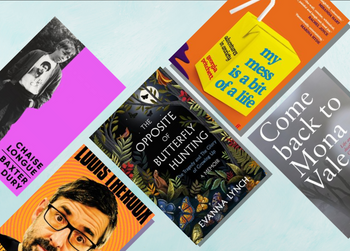 Living through a pandemic brings all sort of challenges that we have to contend with. This latest selection of biographies brings laugh out loud moments, stories of perseverance and courage, and even a local mystery to distract and entertain us.

Theroux the keyhole / Theroux, Louis
“Step inside Louis’ life like never before as he turns his critical eye on himself, his home, and family and tries to make sense of our weird and sometimes scary world. Like millions of others, Louis’ plans were mothballed by the onset of COVID. Unable to escape to the porn sets, prisons and maximum-security psychiatric units that are his usual journalistic beat, he began reporting on a location even more full of pitfalls and hostile objects of inquiry: his own home during a pandemic. Honest, hilarious and heart warming Theroux the keyhole is a diary of the weirdness of family life in Covid World.” (Adapted from catalogue)

My mess is a bit of a life : adventures in anxiety / Pritchett, Georgia
“Multi award winning television writer and producer (Veep, Succession, The Thick of it, Miranda) Georgia Pritchett knows a thing or two about anxiety. From a worrier as a child to an adult living with sometimes crippling anxiety, she takes us through her life sharing stories with warmth and humour. Told in comic vignettes, this delightfully offbeat, painfully honest and snort out aloud funny memoir is a joyful reflection on just how to live and sometimes even thrive (sometimes not) with anxiety” (Adapted from catalogue)

Start your engines / Briggs, Sam
“UK CrossFit superstar Sam Briggs, aka ‘The Engine’, is a true hero in the sport, with a level of endurance unparalleled in the game. From being kicked out of ballet as a child, to qualifying for the CrossFit game 7 times, this is the story of how Sam got to the top of her sport, and battled with everything she had to stay there. Start Your Engines is the story of how, with a combination of grit, training and dogged motivation, it’s never too late to achieve your dreams.” (Adapted from catalogue)

The opposite of butterfly hunting / Lynch, Evanna
“Cast as Luna Lovegood in the Harry Potter films, Evanna Lynch has long been viewed as a role model for people recovering from anorexia. Here, in her memoir, Evanna confronts all the complexities and contradictions within herself and reveals how she overcame a serious eating disorder, worked to conquer her self-hate and began to confront her fear of leaving the neatness and safety of girlhood for the unpredictable journey of being a woman, all in the spotlight of international fame. This is a story of the tragedy and the glory of growing up, of mourning girlhood and stepping into the unknown, and how that act of courage is the most creatively liberating thing a woman can do”. (Catalogue)

Come back to Mona Vale : life and death in a Christchurch mansion / McKinnon, Alexander
“A beautifully written, compelling narrative/memoir that sets about unravelling the mysteries and anomalies behind the public history of a wealthy Christchurch business family in the first half of the 20th century. The story unfolds like a crime or detective tale, and also delves into the history of the Canterbury settlement, contrasting Christchurch’s public values, aspirations and beauty with its murkier private behaviour. The story is told with a graceful touch and an eye for the vivid, comic and telling detail. Alexander McKinnon’s exploration of his family’s past is the record of a beautiful and grand (yet gradually crumbling) manor interwoven with social history – with a sense of the Gothic, of obsession, and of a tight-knit circle where secrets wreak a terrible climax leading to a form of inter-generational haunting.” (Adapted from Catalogue)

Chaise longue / Dury, Baxter
“Methods of parenting and education have progressed in recent years, especially compared to some of the more casually experimental routes inflicted on children of artistic professionals in the 70s and 80s. One experience that would take some beating is that endured by Baxter Dury. When punk rock star Ian Dury disappeared to make films in the late 80s, he left his teenage son in the care of his roadie, in a rundown flat in Hammersmith. But this was no ordinary roadie; this was the Sulphate Strangler. The Strangler, having taken a lot of LSD in the 60s, was prone to depression, anger and hallucinations. He was also, as the name suggests, a drug dealer. What could possibly go wrong? Chaise Longue is an intimate account of the adventures, escapades, and perilous times of Dury’s childhood set in bohemian west London populated with feverishly grubby characters. Narrated in Dury’s candid tone, both sad and funny, this moving story will leave an indelible imprint on its readers.” (Adapted from catalogue)