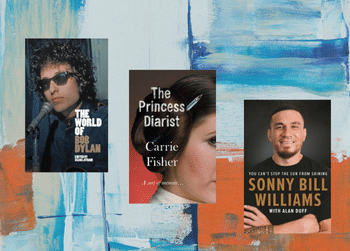 It can be fascinating to learn unexpected facts about celebrities. Did you know that Bob Dylan won a Nobel Prize? How about that Sonny Bill Williams is not just a rugby player, but also a boxer? Discover more interesting stories of famous people in these biography books. 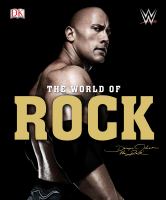 The world of The Rock / Pantaleo, Steve
“Celebrate the impressive career of  “The Rock” Johnson from his explosive WWE debut match to his full-blown Superstar status. Dubbed “The Great One,” The Rock has delighted millions of fans with his charisma, catch phrases and championship wins. Discover The Rock’s fascinating family history as the first third-generation WWE Superstar; his epic wins and greatest moments as The People’s Champion; and his impressive movie career including Fast and Furious franchise. ” (Adapted from the Catalogue)

The princess diarist / Fisher, Carrie
“When Carrie Fisher recently discovered the journals she had kept during the filming of the first Star Wars movie, she was astonished to see what they had preserved–plaintive love poems, unbridled musings with youthful naiveté, and a vulnerability that she barely recognized. Today her fame as an author, actress, and pop-culture icon is indisputable, but in 1976, Carrie Fisher was just a teenager with an all-consuming crush on her co-star. Read what’s behind the scene from Carrie’s handwritten notebook.”  (Adapted from the Catalogue)

The world of Bob Dylan
“Is there any writer or performer more haunting-and more haunted-than Bob Dylan? Like the members of the Nobel committee that awarded him the world’s most important cultural prize, we know he is one of the world’s most influential artists. But which Dylan is it? Is it the country boy who went Nashville and befriended Johnny Cash? Or the Beat-inspired hipster who took to the road with a ramshackle medicine show?  The Sinatra-inspired crooner? ” (Adapted from the Catalogue)

C. S. Lewis : a life : eccentric genius, reluctant prophet / McGrath, Alister E.
“In honor of the 50th anniversary of C. S. Lewis’ death, celebrated Oxford don Dr. Alister McGrath uses his research of Lewis’ correspondence and archival materials, presents us with a compelling portrait of the life of C. S. Lewis, the author of the well-known Narnia series who taught literature at Oxford University. This definitive biography paints a portrait of an eccentric thinker who became a compelling, prophet for our times. (Adapted from the catalogue)

You can’t stop the sun from shining / Williams, Sonny Bill
“Sonny Bill Williams (SBW) is a once in a hundred-year athlete with immense sporting talent in Rugby League, Rugby Union and Boxing. Sonny Bill has built an incredible career and sporting reputation across the globe. His athleticism has taken him from inner-city Auckland, where he grew up, to the highest sporting moments in Twickenham, Eden Park and Sydney’s Olympic Stadium. Working with Alan Duff, award-winning author of Once Were Warriors, this will be the must-read autobiography of the year.” (Adapted from the Catalogue)

Perspective / Perry, Ellyse
“Ellyse Perry is among the all-time greatest cricket and football players in Australia, making her international debut in cricket and football World Cup at the age of 16. From the lessons of a high-performance athlete’s career to appreciating the small things in life, this inspiring illustrated book features themes of dreaming, belief, work, resilience, appreciation, opportunity, balance and perseverance. This empowering book is about what it is to be an elite athlete and trying to be the best person possible.” (Adapted from the Catalogue)