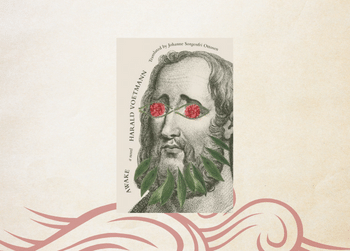 [Pliny the Elder] used to say that “no book was so bad but some good might be got out of it.” ― Pliny the Younger

The recent dramatic volcanic eruption just off the coast of Tonga has been a tragic reminder of the power of nature over our lives. It is perhaps a good point in time to reflect that such events have occurred before and have been documented. One of the books in this month’s recently acquired fiction list, Awake by Harald Voetmannhe, features a fictionalised account of Roman’s Pliny the Elder and Pliny the Younger (his nephew). Pliny the Elder died during the AD 79 eruption of Mount Vesuvius whilst organising a rescue mission for survivors of the eruption, whilst Pliny the Younger provided the only eyewitness account of the event from a boat in the bay of Naples. Pliny the Younger, in his letters, describes the eruption of the volcano; the huge resulting cloud, immense waves, as well as the lightning caused by the eruption and the resulting general widespread devastation. Pliny the Younger’s writing is widely regarded as the first volcanological report of such an event.

Awake / Voetmann, Harald
“In a shuttered bedroom in ancient Italy, the sleepless Pliny the Elder lies in bed obsessively dictating new chapters of his Natural History to his slave Diocles. Fat, wheezing, imperious, and prone to nosebleeds, Pliny does not believe in spending his evenings in repose: No, to be awake is to be alive. There’s no time to waste if he is to classify every element of the natural world in a single work. By day Pliny the Elder carries out his many civic duties and gives the occasional disastrous public reading. But despite his astonishing ambition to catalog everything from precious metals to the moon, as well as a collection of exotic plants sourced from the farthest reaches of the world, Pliny the Elder still takes immense pleasure in the common rose. After he rushes to an erupting Mount Vesuvius and perishes in the ash, his nephew, Pliny the Younger, becomes custodian of his life’s work. But where Pliny the Elder saw starlight, Pliny the Younger only sees fireflies.” (Adapted from Catalogue)

The fossil hunter / Cooper, Tea
“The Hunter Valley 1847  The last thing Mellie Vale remembers before the fever takes her is running through the bush as a monster chases her – but no one believes her story. In a bid to curb Mellie’s overactive imagination, her benefactors send her to visit a family friend, Anthea Winstanley. Anthea is an amateur palaeontologist with a dream. She is convinced she will one day find proof the ichthyosaur and the plesiosaur swam in the vast inland sea that millions of years ago covered her property at Bow Wow Gorge… ” (Adapted from Catalogue) Also available as an eBook.

The perishing : a novel / Deón, Natashia
“Lou, a young Black woman, wakes up in an alley in 1930s Los Angeles, nearly naked and with no memory of how she got there or where she’s from, only a fleeting sense that this isn’t the first time she’s found herself in similar circumstances. Taken in by a caring foster family, Lou dedicates herself to her education while trying to put her mysterious origins behind her. She’ll go on to become the first Black female journalist at the Los Angeles Times, but Lou’s extraordinary life is about to become even more remarkable. ” (Adapted from Catalogue)

Matrix / Groff, Lauren
“Cast out of the royal court by Eleanor of Aquitaine, deemed too coarse and rough-hewn for marriage or courtly life, seventeen-year-old Marie de France is sent to England to be the new prioress of an impoverished abbey, its nuns on the brink of starvation and beset by disease. At first taken aback by the severity of her new life, Marie finds focus and love in collective life with her singular and mercurial sisters. In this crucible, Marie steadily supplants her desire for family, for her homeland, for the passions of her youth with something new to her…” (Catalogue)

Fight night / Toews, Miriam
” Swiv, a nine-year-old living in Toronto with her pregnant mother, who is raising Swiv while caring for her own elderly, frail, yet extraordinarily lively mother. When Swiv is expelled from school, Grandma takes on the role of teacher and gives her the task of writing to Swiv’s absent father about life in the household during the last trimester of the pregnancy. In turn, Swiv gives Grandma an assignment: to write a letter to “Gord,” her unborn grandchild (and Swiv’s soon-to-be brother or sister). “You’re a small thing,” Grandma writes to Gord, “and you must learn to fight.” (Adapted from Catalogue)

Burntcoat : a novel / Hall, Sarah
“In an unnamed British city, the virus is spreading, and like everyone else, the celebrated sculptor Edith Harkness retreats inside. She isolates herself in her immense studio, Burntcoat, with Halit, the lover she barely knows. As life outside changes irreparably, inside Burntcoat, Edith and Halit find themselves changed as well: by the histories and responsibilities each carries and bears, by the fears and dangers of the world outside, and by the progressions of their new relationship” (Adapted from Catalogue). Also available as an eBook.

The matzah ball / Meltzer, Jean
“For a decade Rachel Rubenstein-Goldblatt has hidden her career as a Christmas romance novelist from her family. Her talent has made her a bestseller even as her chronic illness has always kept the kind of love she writes about out of reach. When her diversity-conscious publisher insists she write a Hanukkah romance, her well of inspiration runs dry. Rachel is determined to find her muse at the Matzah Ball, a Jewish music celebration on the last night of Hanukkah, even if it means working with her summer camp archenemy– Jacob Greenberg. Their grudge still glows brighter than a menorah, but as they spend time together Rachel finds herself drawn to Hanukkah– and Jacob.” (Catalogue)

A passage north : a novel / Arudpragasam, Anuk
“A Passage North begins with a message: a telephone call informing Krishan, newly returned to Colombo, that his grandmother’s caretaker, Rani, has died in unexpected circumstances–found at the bottom of the village well, her neck broken. The news coincides with the arrival of an email from Anjum, a woman with whom he had a brief but passionate relationship in Delhi a few years before, bringing with it the stirring of old memories and desires. As Krishan makes the long journey by train from Colombo into the war-torn northern province for the funeral, so begins an astonishing passage into the soul of a country…” (Catalogue)