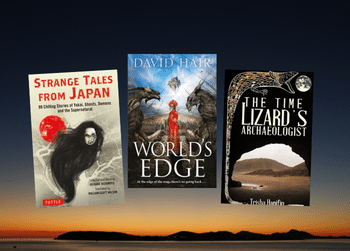 “You know, a lot of strange things happen in this world.”
― Kōji Suzuki, Ring

Welcome to our first selection of newly acquired Science Fiction and Fantasy titles for 2022. We’ve kicked the year off with a very varied selection of new titles; including two from our own fair shore, David Hair’s World’s Edge and Trisha Hanifin’s The Time Lizard’s Archaeologist.

Another title that caught our particular attention was Strange tales from Japan: 99 chilling stories of yokai, ghosts, demons and the supernatural by Nishimoto, Keisuke. This is an excellent collection of spine tingling tales about hauntings and strange goings-on in Japan. Japanese culture has long been steeped in legends and folklore surrounding the supernatural world, including a rich vein of modern urban legend supernatural tales. These tales have inspired many contemporary books and films, one notable example being the blood chilling novel Ring (originally published by the title Ringu). Follow this link to find Ringu on our online catalogue.

The roots of Japanese supernatural beings can often be traced back to the ancient idea of animism, in which spirits are believed to reside in all things, both natural and created. This rich supernatural culture is resplendent with many beings, such as Yokai, which are defined loosely as strange apparitions. One of the core categories of supernatural beings in Japan (there are several others), these suspicious and mysterious spirits range from just being benevolent or mischievous to being malevolent and harmful. Yokai can have animal features, be humanoid, have no discernible shape or even occasionally possess shapeshifting powers. During the Edo period, woodblock artists such as famed Katsushika Hokusai created prints of Yokai. In these prints, artists occasionally even invented Yokai of their own.

World’s edge / Hair, David
“Renegade sorcerer Raythe Vyre went off the edge of the map, seeking riches and redemption but he has found the impossible: a vanished civilisation – and the threat of eternal damnation! Chasing a dream of wealth and freedom, Raythe Vyre’s ragtag caravan of refugees from imperial oppression went off the map, into the frozen wastes of the north. What they found there was beyond all their expectations… ” (Adapted from Catalogue)

The time lizard’s archaeologist / Hanifin, Trisha
“2016. Auckland psychologist, Jason Winston, grieving over the death of his sister and increasingly disorientated by dreams and visions, begins to experience an alternate reality. Here he encounters Aja, a woman on a mission to discover who destroyed her village by stealing their powerful source of fuel. 2026. Auckland suffers an ecological crisis: the bee population is almost wiped out and the human population exposed to a debilitating virus. Isolated camps are established in the bush for those infected. 2036. A time of increasing food shortages, growing unrest and the influence of ‘The Flock’, which promises a haven for young people fearful of their future.” (Adapted from Catalogue)

Destroyer of light / Brissett, Jennifer Marie
“The Matrix meets an Afro-futuristic retelling of Persephone set in a science fiction underworld. A violent warlord abducts a young girl from the agrarian outskirts of Dusk leaving her mother searching and grieving. *Genetically modified twin brothers desperately search for the lost son of a human/alien couple in a criminal underground trafficking children for unknown purposes. *A young woman with inhuman powers rises through the insurgent ranks of soldiers in the borderlands of Night. Their stories skate across years, building to a single confrontation when the fate of all-human and alien-balances upon a knife’s-edge. Warning: This book is designed for audiences 18+ due to scenes of physical and sexual violence, and themes that some may find disturbing” (Adapted from Catalogue)

This weightless world : a novel / Soto, Adam
“When a mysterious signal arrives from outer space, first seen as a symbol of hope, three people, forced to reckon with its aftermath, begin to feel the weight of past mistakes in order to move towards the future.”A debut novel subverting a classic sci-fi trope set in gentrified Chicago, the tech boom corridors of Silicon Valley, and across the vastness of the cosmos. ‘The Weightless World’ follows a revolving cast of characters after a mysterious signal from outer space upends their lives. Sevi is a burned-out music teacher desperate for connection, fighting to find meaning in rekindled love. Ramona, his on-again, off-again computer programmer girlfriend is determined to build an AI to prevent mankind’s destruction. ” (Adapted from Catalogue)

Along the Saltwise Sea / Baker, A. Deborah
“After climbing Over the Woodward Wall and making their way across the forest, Avery and Zib found themselves acquiring some extraordinary friends in their journey through the Up-and-Under. After staying the night, uninvited, at a pirate queen’s cottage in the woods, the companions find themselves accountable to its owner, and reluctantly agree to work off their debt as her ship sets sail, bound for lands unknown. But the queen and her crew are not the only ones on board, and the monsters at sea aren’t all underwater.” (Adapted from Catalogue)

A Clockwork River / Emery, J. S.
“Lower Rhumbsford is a city far removed from its glory days. On the banks of the great river Rhumb, The once torrential Rhumb has been reduced to a sluggish trickle. The fortunes of the Locke family are similarly reduced. In a once fashionable quarter of the once great city, siblings Samuel and Briony Locke distract themselves: Sam tends to his vast lock collection instead of finishing his engineering thesis; facing the prospect of a disagreeable marriage, Briony occupies herself with alchemical experiments. Until one night Samuel leaves the house carrying five of his most precious locks and doesn’t come back.” (Adapted from Catalogue)

The hand of the Sun King / Greathouse, J.T
“All my life, I have been torn between two legacies: that of my father, whose roots trace back to the right hand of the Emperor. That of my mother’s family, who reject the oppressive Empire and embrace the resistance. I can choose between them – between protecting my family, or protecting my people – or I can search out a better path . . . a magical path, filled with secrets, unbound by Empire or resistance, which could shake my world to its very foundation. But my search for freedom will entangle me in a war between the gods themselves…”  (Adapted from Catalogue)

Strange tales from Japan : 99 chilling stories of yokai, ghosts, demons and the supernatural / Nishimoto, Keisuke
”  The captivating tales in this volume include: The Vengeance of Oiwa-The terrifying spirit of a woman murdered by her husband who seeks retribution from beyond the grave The Curse of Okiku-A servant girl is murdered by her master and curses his family, with gruesome results The Snow Woman-A man is saved by a mysterious woman who swears him to secrecy Tales of the Kappa-Strange human-like sprites with green, scaly skin who live in water and are known to pull children and animals to their deaths And many, many more!” (Adapted from Catalogue)

Beyond the hallowed sky / MacLeod, Ken
“When a brilliant scientist gets a letter from herself about faster-than-light travel, she doesn’t know what to believe. The equations work, but her [a[er is discredited – and soo the criticism is more than scientific. Exiled by the establishment, she gets an offer to build her starship from an unlikely source. But in the heights of Venus and on a planet of another star, a secret is already being uncovered that will shake humanity to its foundations.” (Catalogue)