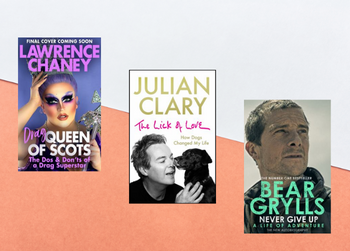 What a feast we have for you for this holiday period. There’s the larger-than-life Scottish Drag Queen Lawrence Chaney with their book Drag Queen of Scots : the dos and don’ts of a drag superstar. We have a stunning coffee table styled glossy pictorial tribute to Dan Carter. The delightful but naughty Julian Clary has written a doggy memoir… celebrating man’s best friend what else? Megan Dunn entertains us with an utterly engaging memoir-in-essays about art, sex, family and growing up in New Zealand. Never give up is the inspiring autobiography from Bear Grylls who takes us behind the scenes of some of his toughest expeditions. And what holiday wouldn’t be complete without the comedic wit from the consummate entertainer Billy Connelly!

With such a super book line up Wellington City Libraries truly is the gift that keeps on giving.

Drag Queen of Scots : the dos and don’ts of a drag superstar / Chaney, Lawrence
“Lawrence Chaney has wowed audiences across the globe as the winner of RuPaul’s Drag Race UK. From the tiny town of Helensburgh, near Glasgow, Lawrence has exploded on to the world stage, charming us with their charisma, humour and damn good looks. But as with any success story, it wasn’t all plain sailing. In Lawrence (Drag) Queen of Scots, the loch ness legend themself takes us through the struggles faced to get to where they are now. From a little boy feeling self-conscious and turning to humour to avoid being bullied, to finding drag as a vehicle towards confidence and self-love. With their top tips on everything from padding and make-up to building your own drag community, you’ll have all you need to strut your way to the top, too. You’ve seen the looks, the laughs, and my goodness you’ve seen a lot of tears, but now it’s time to grab a bottle of Irn-Bru and dive heard first into the purple haze that is the world of LAWRRREEENNNCE CHAAANEYYYYY!” (Catalogue)

Dan Carter : 1598 / Carter, Dan
“Coffee table books of a sporting variety have been rare in New Zealand during the years. Dan Carter 1598 attempts to change this as a large scale pictorial tribute to his astounding point scoring feats in test rugby. There is great variety in the images which convey the drama, camaraderie, emotion and physicality of the sport. It’s also a reminder of the power of the photograph, easily forgotten in our digital, fast twitch world. Dan Carter 1598 is a wonderful tribute to a remarkable player. ” (Adapted from Ketebooks, read the complete review here)

The lick of love : how dogs changed my life / Clary, Julian
“From one of Britain’s best-loved comedians comes this wonderfully funny, sharp and touching memoir and a celebration of the bond between man and dog – an autobidography, if you will. The Lick of Love takes us on a tour of Julian’s colourful life and the dogs that were by his side from the age of 21. An entertaining read, that celebrates the joy of being a dog lover, told with Julian Clary trademark humour.” (Adapted from catalogue)

Things I learned at art school / Dunn, Megan
“Part memoir, part essay collection… Things I Learned at Art School tells the story of Megan Dunn’s early life and coming-of-age in New Zealand in the ’70s, ’80s and ’90s. From her single mother’s love life to her Smurf collection, from the mean girls at school to the mermaid movie Splash, from her work in strip clubs and massage parlours (and one steak restaurant) to the art school of the title, this is a dazzling, killer read from a contemporary voice of comic brilliance.” (Catalogue) Also available as an ebook

Never give up / Grylls, Bear
“In Never give up, global adventurer, Chief Scout and TV presenter Bear Grylls immerses readers in some truly remarkable adventures and survival missions. Bear takes readers behind the scenes of Man vs. Wild, the series that spawned an entire adventure industry. He also provides a unique and revealing insight into what it’s really like to go Running Wild with President Obama, Roger Federer and Julia Roberts, to name but a few of his global superstar guests. Along the way, Bear opens up about his most personal challenges, discovers the true value of adventure, and embodies the enduring power of courage, kindness and a never give up spirit.” (Adapted from Catalogue)

Windswept & interesting : my autobiography / Connolly, Billy
In his first full-length autobiography, comedy legend and national treasure Billy Connolly reveals the truth behind his windswept and interesting life. Billy’s life is a remarkable story of success against all the odds. But it was his ability so spin stories, tell jokes and hold an audience in the palm of his hand that truly set him apart. As a young comedian Billy broke all the rules. He was fearless and outspoken – willing to call out hypocrisy wherever he saw it. But his stand-up was full of warmth, humility and silliness too. His startling, hairy ‘glam-rock’ stage appearance – wearing leotards, scissor suits and banana boots – only added to his appeal. It was an appearance on Michael Parkinson’s chat show in 1975 – and one outrageous story in particular – that catapulted Billy from cult hero to national star. TV shows, documentaries, international fame and award-winning Hollywood movies followed. Billy’s pitch-perfect stand-up comedy kept coming too – for over 50 years, in fact – until a double diagnosis of cancer and Parkinson’s Disease brought this remarkable live performances to an end. Windswept & Interesting is Billy’s story in his own words. It is joyfully funny – stuffed full of hard-earned wisdom as well as countless digressions on fishing, farting and the joys of dancing naked. It is an unforgettable, life-affirming story of a true comedy legend.” (Adapted from Catalogue)