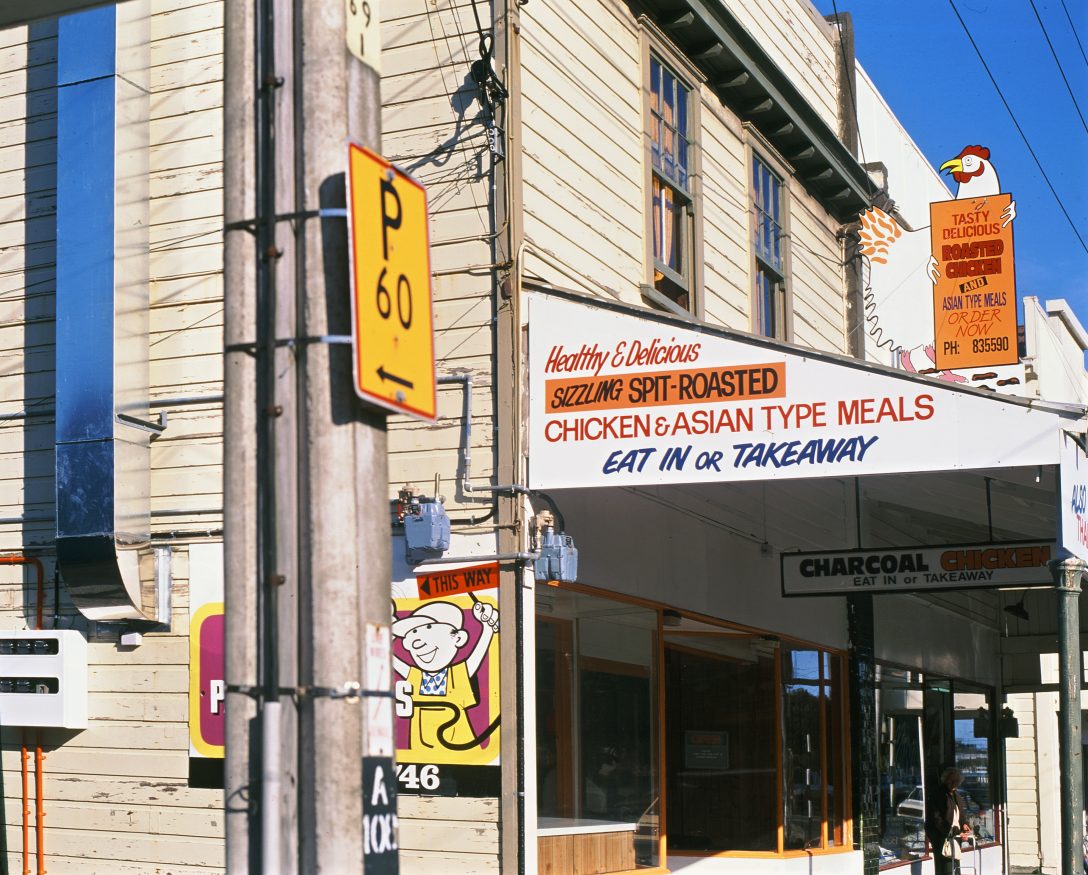 Wellington City Libraries is proud to host a remarkable collection of photographs on Recollect that capture the vibe of our city from three decades ago.

Derek Smith was born in the United Kingdom but immigrated to New Zealand with his family at the age of six. He grew up in the East Coast Bays area of Auckland’s North Shore in the 1960s and 70s where he developed an interest in photography as a teenager. After working a series of odd-jobs, in his early 20s he got a job as a meter reader for the Auckland Gas Company. Discovering that if he worked hard, he could normally complete his daily round within five hours, he took the opportunity to use his camera to document the city and his mild interest in photography became a passion.

He began to use the resources in the library of the Elam School of Fine Arts which featured an excellent collection of photography books and found particular inspiration in the work of the American photographers Edward Weston, Stephen Shore, Walker Evans and William Eggleston. He also befriended John B. Turner, a legendary senior lecturer sometimes called “the father of modern NZ photography” who gave him advice and encouragement even though Derek was not formally enrolled in the school.  He also joined the PhotoForum collective that Turner had co-founded in 1973. By this stage he had purchased a Mamiya 645 medium-format camera which uses 120 roll film to create huge 6 x 4.5 centimetre negatives or transparencies. With an individual frame being more than 2.5 times larger than the standard 35mm film common at the time, when combined with Mamiya’s excellent lenses this camera was capable of rendering extremely high quality images that still rival most of the high resolution DSLR and mirrorless digital cameras available today.

Unusually, he preferred to use colour transparency film rather than black & white negative film which was the dominant medium being used by ‘serious’ photographers at the time, many of whom dismissed colour as suitable only for tourist-oriented scenic images or family snaps. For his subject matter, Smith became attracted to the creative rendering of the utterly ordinary and recognised how transient our urban environments are and how important they were to document. Around this time Robin Morrison published his influential and iconic book The South Island from the Road (1981) which Smith felt validated the use of colour for serious photography. His work is often characterised by being taken at the start or the end of the day so that strong shadows help frame the composition.  As he wrote in his introduction to his book What the Gas Man Saw :

“From the perspective of personal expression, I became excited by the intellectual quality of form and the emotional expression of colour. I soon found that the best images combined both of these aspects in a picture that was also motivated by a social response. Colour was largely determined by light quality and for my language this meant the best light was autumn and winter, preferably with a cloudless sky leaving the light clear and golden.”

In 1988 he moved to Lower Moutere in part to spend more time with his parents who had moved to the district in the early 1980s. With a stroke of luck, he soon found himself in another meter reading job and was soon reading meters and taking photographs across the Tasman District.

In 1990 Derek decided to apply for a highly sought after place in Wellington Polytechnic’s course in professional photography (later to become part of Massey University’s School of Design). He was accepted, moved to Wellington for his studies and began documenting the capital with his camera. He quickly discovered that much of the course didn’t align with his creative sensibilities but he was given the freedom to pursue his own path by the head tutor, Tony Whincup. On completing his studies he acquired another meter-reading job in Wellington and continued to photograph his adopted city into the early 1990s.

Smith’s photographs capture the city on the cusp of a process that would see much of the city’s inner-housing areas transformed through gentrification. At the time, Wellington was still many years away from being dubbed  “the coolest little capital in the world”; it was still a city where cheap rents could be found in the inner suburbs, communities of artists & musicians thrived and a slightly run-down house needing a bit of work could be purchased for little more than $100,000.  Te Aro had largely been abandoned as a residential area; today its population is over 13,500 but in 1991 it was less than 900. However, things quickly began to change as a new café culture emerged and inner-city living suddenly became ‘cool’. A new generation, chasing cheap rents, started to establish improvised apartments (often illegally) in old factories, workshops and warehouses and the Te Aro area began to hum.

Viewed today some 30 years after they were taken, his photographs often have a nostalgic and slightly mournful quality about them, reflecting a simpler time in our society which has since passed. Although Derek Smith’s job took him across greater Wellington, it was in the southern and eastern suburbs that he found the scenes that would inspire him the most and a majority of the photographs in this collection are from these areas. They are often characterised by having intense colours, a particular attribute of the Fujifilm ‘Velvia’ film stock that Smith preferred. Their clarity is such that some appear as if they were taken only yesterday until with a closer look, their true age is revealed by things like the presence of models of cars that have long since disappeared from our streets and by the almost-naïve design of signs & advertisements belonging to another era.

In 1993, Derek and his wife decided to move to Nelson. They started a family and subsequently lived in a number of centres across the South Island before settling in Kakanui near Oamaru where they live today.

The Derek Smith Collection on Recollect

Wellington City Libraries wishes to thank and acknowledge Derek Smith  without whom this online collection would not be possible. Some of the information in this blog has come from the introduction to his book What the Gas Man Saw (Potton & Burton, 2015).