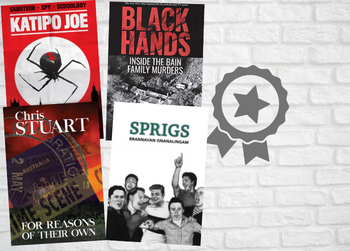 Congratulations to the recently announced winners of the 2021 Ngaio Marsh Awards!

The fabulous Wellington-based Brannavan Gnanalingam picked up the Best Novel accolade, with his novel Sprigs described by Radio NZ’s Kim Hill as a “scarily contemporary and realistic story… an extraordinary piece of writing.”

The non-fiction award was won by Martin Van Beynen and his startling Black Hands: inside the Bain family murders.

The Best First Novel went to Chris Stuart’s For Reasons of Their Own, and the inaugural Best kids/YA novel went to Blitzkrieg by Brian Falkner.

The Ngaio Marsh Awards originated in 2010 for excellence in New Zealand crime, mystery and thriller writing. In 2016 the award for Best First Novel was added and in 2017 another category was also added for the Best Non-Fiction. And this year saw the introduction of a new kids / young adult category. Our heartfelt congratulations to all the Ngaio Marsh winners and nominees.

To accompany the awards, we recently had the great pleasure of seeing Brannavan Gnanalingam in full flow leading in an evening panel of criminally good conversation at our event A Capital Crimespree: Newtown Mystery in the Library, along with fellow crime luminaries Dame Fiona Kidman, Sally J Morgan and husband-and-wife writing duo Dr Judy Melinek and TJ Mitchell, a recording of which you can watch below. Please note “Mature/ adult issues of a challenging nature” were covered.

Sprigs / Gnanalingam, Brannavan
“It is Saturday afternoon and two boys’ schools are locked in battle for college rugby supremacy. Priya – a fifteen year old who barely belongs – watches from the sidelines. Then it is Saturday night and the team is partying. Priya’s friends have evaporated and she isn’t sure what to do. In the weeks after ‘the incident’ life seems to go on. But when whispers turn to confrontation, the institutions of wealth and privilege circle the wagons.” (Adapted from Catalogue)

Black hands : inside the Bain family murders / Van Beynen, Martin
“Journalist Martin van Beynen has covered the Bain story closely for decades … Now, his book brings the story completely up to date: exploring the case from start to finish, picking through evidence old and new, plumbing the mysteries and motives, interviewing never-before-spoken-to witnesses and guiding readers through the complex police investigation and court cases, seeking to finally answer the question: Who was the killer?”(Adapted from Catalogue) Also available as an eBook.

For reasons of their own / Stuart, Chris
“Robbie Gray, a talented but troubled Detective Inspector stationed in Melbourne, who has fallen foul of police bureaucracy, is called to a investigate a dead body found in a rural wetland swamp. Under-resourced, with a corpse that cannot be identified and no apparent motive for the murder, she fails to make headway. The Federal Police take over the investigation and ASIO becomes involved, focusing on a terrorism angle. Convinced they are misinterpreting the evidence, or worse, DI Gray begins her own investigation assisted by a young Aboriginal policeman.What DI Gray and her team uncover, challenges their understanding of power and powerlessness and questions their interpretation of whether murder, under certain circumstances, may be justified.” (Adapted from Catalogue)

Blitzkrieg / Falkner, Brian
“Joseph St. George is a young New Zealander, the son of diplomats in 1930s Berlin. But the Nazis are on the rise and the world is on a spinning path to destruction. Joe’s world is about to change, violently. After a narrow escape from Germany with his mother, Joe is recruited by MI5 and given a mission to infiltrate the Hitler Youth movement. From vital convoys across the frozen North Atlantic, to the terror of the London Blitz, to the shadowy world of the French Resistance, this is Joe’s world. Inspired by true events, Katipo Joe is a story of incredible heroism, unlikely friendships and unbearable tragedy, set against the backdrop of World War Two”(Adapted from Catalogue) Also available as an eBook.