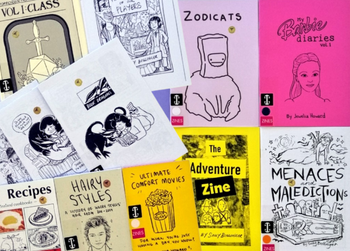 The most recent Zinefest to be held in Wellington was in July. This time it was a one day event at the Wellington Faculty of Architecture and Design Innovation. Most of Wellington City Libraries lending zine collection is bought locally at Wellington Zinefests. So here are some selected highlights of zines purchased from the Winter Zinefest. They will be available for borrowing soon from the Arapaki Manners Street, He Matapihi, and Newtown branches. There were several new zines from Zinefest regular, Jewelia Howard. They include a bright pink zine which reviews some of the Barbie Doll movies, and a zine of comfort movies, which lists Jewelia’s favourite “chick flicks”; and my personal favourite, “Hairy Styles”, an illustrated zine of Harry Styles’ hair styles, from 2011 – 2019.

Sally Bollinger also provided several new zines. “The Flat of Whimsy” is an illustrated collection of scenes from her flatting life. While “Menaces and Maledictions” is a cartoon about a vampire in early colonial New Zealand. Plus Bollinger wrote two zines about role-playing games (RPG), and Dungeons and Dragons: “The Adventure Zine” and “A Basic Handbook of our Players”, respectively.

RPG and Dungeons and Dragons was a theme at this year’s Winter Zinefest. @feydayarts has created an extremely fun “Choose Your Own D & D Character” with 12 possible endings. While well-known cartoonist, Dylan Horrocks, has “Secret Door”, a  whimsical zine about a role-playing game on nostalgia and memory. Another prominent New Zealand writer and artist, Tara Black, was also there with several zines. There were two collections of live drawings done at the Auckland Writers’ Festival 2021, and Featherston Booktown 2021. Plus Black wrote two volumes of cartoon zines about Ana, who is a teenager who lives with her mother and sister. One day she wakes up to find two “Book Dragons” under her bed. They are obsessed with books, and they are actually badgers!

There were also zines featuring local content. David Tulloch’s zine, “Regurgitated Recipes”, which collects recipes from six old New Zealand cookbooks, going back as far as 1944. And also Andrew McCauley’s volume 1 of the “Wellington Grave Explorer’s Guidebook”. This first volume focuses on Karori Cemetery, and highlights the graves of prominent people in the organised labour movements of the nineteenth and twentieth centuries. And finally, @Badbroidery has produced a cute zine for “cat lovers and the zodiac/ horoscope curious” which matches cute line drawings of cats with their zodiac traits.

View all posts by Susannah