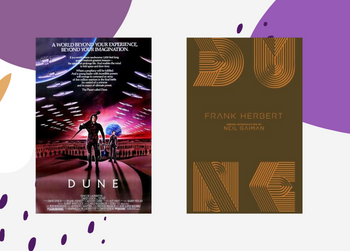 “Deep in the human unconscious is a pervasive need for a logical universe that makes sense, But the real universe is always one step beyond logic.”
– Frank Herbert, Dune.

On its first publication in 1965, Dune was originally released as two separate serials in the legendary ‘Analog’ magazine. And even more strangely, the novel’s first combined print publication was by Chilton publishing, a publishing house that up to that point had only published automobile repair manuals. However, the remarkable nature of the novel was quickly recognised and the following year the book won both the Hugo and the inaugural Nebula Award for Best Novel. And since its publication it has gone on to become the world’s bestselling science fiction book, as well as being regarded by some critics as the best science fiction book ever written.

Dune fever has reignited recently with the forthcoming release of the much delayed, much anticipated and already critically acclaimed Denis Villeneuve movie.

So why is Dune so popular?

The novel has a wide range of key themes and topics that inspired it:

And of course all of these themes  have strong resonances to this day and the concerns of our time.

This enduring popularity has spanned a whole universe of sequel, prequels and works set in and around the original’s universe. Not to mention the polarising but still stunning David Lynch movie and the aborted Alejandro Jodorowsky film, which amongst its intended cast included Salvador Dalí, Orson Welles, David Carradine and Mick Jagger with a soundtrack by Pink Floyd. This abandoned film project would cast a long shadow and have a heavy influence on the science fiction masterpiece Alien. There’s also a good television adaptation and it is safe to say that without Dune the novel Star Wars would not exist.

Below are just a few of our many Dune related items:

Dune / Herbert, Frank
“Science fiction’s supreme masterpiece, Dune will be forever considered a triumph of the imagination. Set on the desert planet Arrakis, it is the story of the boy Paul Atreides, who will become the mysterious man known as Muad’Dib. Paul’s noble family is named stewards of Arrakis, whose sands are the only source of a powerful drug called “the spice.” After his family is brought down in a traitorous plot, Paul must go undercover to seek revenge, and to bring to fruition humankind’s most ancient and unattainable dream. A stunning blend of adventure and mysticism, environmentalism and politics.”(Adapted from Catalogue) Also available as an Audiobook.

Dune messiah / Herbert, Frank
“Set on the desert planet Arrakis, a world fully as real and as rich as our own, Dune Messiah continues the story of the man Muad’dib, heir to a power unimaginable, bringing to completion the centuries-old scheme to create a superbeing.” (Adapted from Catalogue) Also available as an Audiobook.

Dune : a place beyond your dreams : a movie beyond your imagination
“Travel to a time and place beyond your imagination with this definitive edition of David Lynch’s epic sci-fi adventure Dune. Kyle Maclachlan heads an all-star cast ) as Paul Atreides, an intergalactic warrior who leads his people into battle against the dreaded Harkonnens for control of the desert planet Arrakis, and it’s most valuable asset: the spice Melange.” (Adapted from Catalogue) Click HERE to access Memory: The Origins of Alien a documentary that talks in part about the connections between Dune and Alien.

Lawrence in Arabia : war, deceit, imperial folly and the making of the modern Middle East / Anderson, Scott
“Amidst the slaughter in European trenches, the Western combatants paid scant attention to the Middle Eastern theatre. As a result, the conflict was shaped to a remarkable degree by a small handful of adventurers and low-level officers far removed from the corridors of power. At the centre of it all was Lawrence. In early 1914 he was an archaeologist excavating ruins in the sands of Syria; by 1917 he was battling both the enemy and his own government to bring about the vision he had for the Arab people.” (Adapted from Catalogue) Click here for the DVD.

The decline and fall of the Roman Empire / Gibbon, Edward
“This account of the Roman Empire was in its time a landmark in classical and historiographical scholarship and remains a powerful contribution to the interpretation of Roman history.” (Adapted from Catalogue)

Foundation ; Foundation and Empire ; Second Foundation / Asimov, Isaac
“The Foundation, established after the Old Empire gives way to barbarism, fights against a mutant strain called the Mule and tries to get rid of the Second Foundation after learning it will inherit a future Empire.” (Adapted from Catalogue)

Le morte d’Arthur : the seventh and eighth tales / Malory, Thomas
“P.J.C. Field, the world’s pre-eminent Malory specialist, presents Malory’s seventh and eighth tales, recounting the decline and end of Camelot. The authoritative text is accompanied by indispensable notes and preceded by a remarkably thorough and learned-but never obscure-introduction sufficient to prepare students and other readers to profit fully from the texts.” (Catalogue)

Also available as an Audiobook.